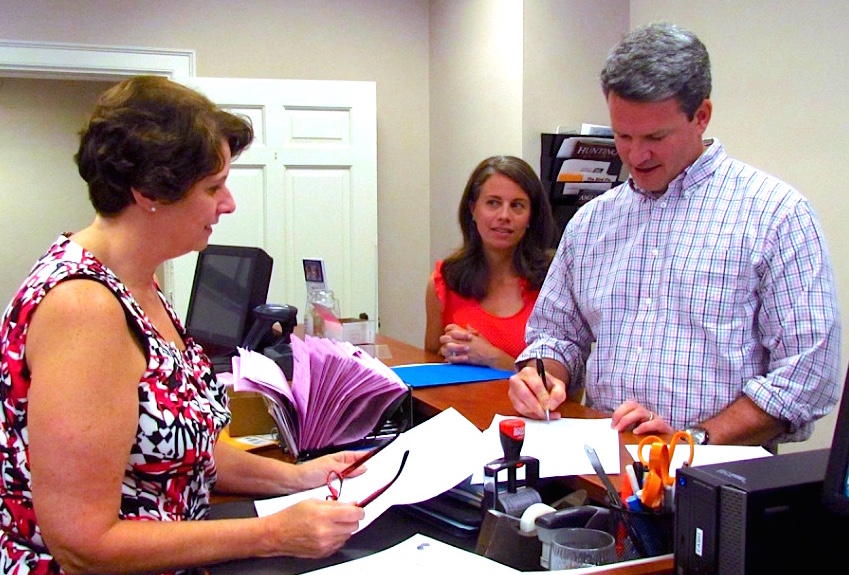 Wilton resident Dave Clune declared his intention to run for a seat on the town’s Board of Selectmen yesterday, Wednesday, Aug. 5, when he walked into the town clerk‘s office mid-afternoon to submit the signatures required by the state to be a petition candidate in the race. Although it will take approximately two weeks for the town clerk to verify that each person who signed Clune’s petition is a registered Wilton voter, Clune likely has more than enough signatures to officially be a candidate for selectman.

Once those signatures are certified, Clune will be a petition candidate—and one who is unaffiliated with any political party.

In order to be considered as a petition candidate, Clune had to file an application with the Secretary of State‘s office in Hartford to request a petition. That office told him he needed to collect 14 signatures in order to be put on the ballot for the Nov. 3 election. According to Lori Kaback, Wilton’s town clerk, state law sets that amount at 1-percent of the number of voters who cast a ballot for that office in the last election. The last municipal election was in 2013, when 1,320 people voted overall.

Clune collected 29 signatures, which are now being verified by the town clerk.

We’ve Got a Horse Race!

Not only will the Nov. 3 vote have a contested race for first selectman between Democrat Deb McFadden and Republican Lynne Vanderslice—a race that’s being contested for the first time in 10 years—but Election Day will also now see four candidates vie for the two open Bd. of Selectmen seats, if Clune’s petition is verified. Also running are Michael Kaelin on the RTC slate and Gil Bray and Brian Lilly on the DTC slate. So, will the two highest vote getters win the two open seats?  That depends…

Wilton’s Town Charter outlines an interesting roadmap for how the election can turn out:  it mandates that no more than three members from the same party can serve on the Bd. of Selectmen, including the first selectman. The two current members of the BoS who don’t have to run in November are Jim Saxe, a Republican, and Richard Dubow, a Democrat.

If Vanderslice wins, and Kaelin is among the two highest vote getters he’ll be able to be seated, and the other highest vote getter among the other three candidates will win the second open seat.  If McFadden wins, then only one Democrat would be eligible to take a seat, and the other spot would go to either Clune or Kaelin–whomever receives the most votes. In either scenario, the possibility exists that there may not be a Democrat seated at all, if Clune and Kaelin are the top two vote getters.

Needless to say, this presents a much more exciting race than Wilton’s last municipal election in 2013, when not a single candidate faced a challenge. That election saw a voter turnout of only 11.5 percent. Time will tell if the competition brings out more Wilton residents.

Where Does Clune Appear on the Ballot?

In every race, according to Young-Kleinfeld, the ballot will list Democratic candidates first, followed by Republicans and finally unaffiliated, petition or minority party candidates, if there are any. That’s thanks to Gov. Dannel Malloy–a Democrat–winning re-election in 2014. “Basically, it’s whichever party’s candidate won the gubernatorial election,” she said.