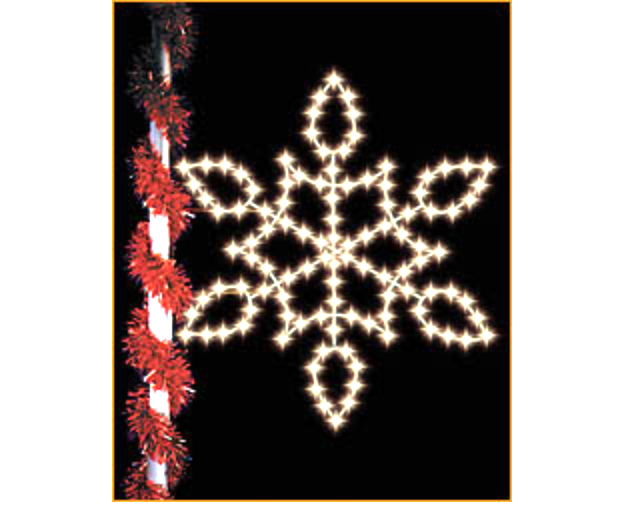 Wilton Center will sparkle brighter during the upcoming holiday season, thanks to an effort by a group called “Let’s Make Wilton Beautiful.” Co-chairs Suzanne Knutson and Kelly Lash presented to the Board of Selectmen on Monday evening and announced that there will be 3-foot lighted snowflakes added to the decorations on Wilton Center lampposts.

The committee raised money through private donations, enough to purchase giant LED snowflakes, which will be attached to the lamp posts in the center of town. “We believe these festive 3-foot snowflakes will add much needed holiday spirit and joy to the evening sky,” Knutson says.

(Editor’s note:  the lighted snowflake pictured above may not be the actual snowflake design, but it is one offered by the vendor from which the committee purchased the decorations. We’ll have a picture later on once the snowflakes are installed.)

Each of the snowflakes cost $350. The committee has already raised enough money from private sources to purchase 27 snowflakes, which will be attached to the lampposts that run along Center St., Old Ridgefield Rd. and a portion of River Rd. (stretching from Ridgefield Rd. to Wilton Hardware).

There are 54 lampposts in total in the central shopping district. The snowflakes will be attached to alternating lampposts, and the other 27 lampposts will be decorated with the navy banners with white snowflakes purchased two years ago for the town. In addition, every lamppost will have a red bow, greenery garland and lights.

The committee is immediately launching a town-wide fundraising campaign to raise enough money to buy another 27 snowflakes for the remaining lampposts in the center of town (along Old Ridgefield Rd., Hubbard Rd. and Godfrey Pl.).

“We have a real urgency to raise the money quickly because the manufacturer of the snowflakes runs a 2-for-1 sale in January, so we can purchase them for half price if we act right away,” Knutson explains.

The snowflakes that have already been purchased were delivered to Parks and Recreation, and Parks crews will begin to put them up in the next week or so.

The committee told the selectmen that there was an effort to balance holiday festivity with inclusiveness in choosing the decorations. When selectwoman Deb McFadden asked if the committee had considered that not everyone in Wilton celebrates Christmas and that the town decorations should “be sensitive to that in our downtown area,” Knutson affirmed that was the committee’s intent, noting that was the reason the committee selected snowflakes. She added, “You want everybody to feel like it’s their holiday too. Well, Kelly is Jewish and I’m not religious.”

Knutson adds, “I think these snowflakes will be a real positive addition to the community. My hope is that they’ll make the town more festive and give people a reason to come out at night, maybe shop or go to a restaurant, and enjoy the beauty of our community.”

Selectman Josh Cole commented about neighboring Ridgefield, and the decorations that adorn that town’s Main St. shopping district. “It’s great what we’re doing, we need to up our game.”

Contributions can be made through the Wilton Garden Club, either on the Garden Club website or sent to PO Box 121 in Wilton. All donations are tax deductible and will be acknowledged. Committee members say that while each snowflake costs $350, they hope donors will contribute whatever they can. “Every donation, large or small, makes a positive difference in enhancing the beauty and festiveness of our town.”