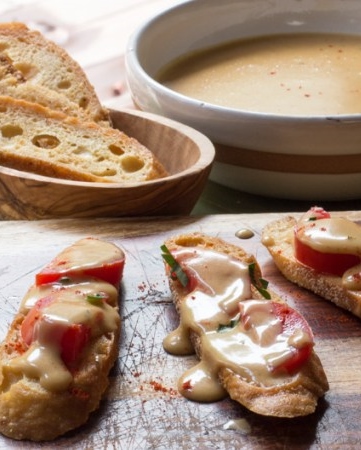 Welsh Rabbit (sometimes called Welsh Rarebit) is a dish consisting of a savory sauce of melted cheese and various other ingredients, served hot after being spooned over slices of toasted bread – nary a hare in sight! Welsh Rabbit dates from the early 1700s and has long been enjoyed as hearty tavern supper. Wilton Historical Society museum educator Laurie Walker will show the children how to make Welsh Rabbit, and some Molasses Bread, too, from a Revolutionary War period recipe.

The Colonial Cookery and Customs for Kids Workshop at the Wilton Historical Society teaches kids a “reciept” (recipe) used in the Connecticut region. While the food is prepared, they hear about Colonial manners, morals and way of life. The monthly workshops feature relatively simple dishes made with local, seasonal ingredients, adapted for modern kitchens. All participants will sample their own cooking and take home recipe cards – as well as any leftovers! The children will learn how a Colonial kitchen would have operated, in order to appreciate the modern conveniences we take for granted. Previous sessions have made bannock cakes, pease porridge, pickles, an amulet of green peas, apple tansey, fairy butter, pumpkin bread, cranberry shortbread, New Year’s “cakes,” New England chowder, hand pies, cheese and ramp soufflé, pea and watercress Rappahannock, blackberry maslin, thirded bread, pound cake with “Oranges” juice, maple cup custard, pepper pot soup, scalloped tomatoes, dressed macaroni and cheese, and gingerbread cakes.

Welsh Rabbit vs. Welsh Rarebit: “Though the “Welsh” part of the dish’s name seems clear-cut, an etymological issue as sticky as melted Cheddar surrounds the second word:  is it rabbit, or rarebit? The earliest reference we have to the dish, in 1725, is quite clearly rabbit; it’s not until over 50 years later that the mysterious alternative spelling starts to twitch its whiskers. John Ayto in his A Diner’s Dictionary writes that rarebit was probably ‘an attempt to folk-etymologize [the name] – that is, to reinterpret the odd and inappropriate-sounding rabbit as something more fitting to the dish.’ The new name caught on and references to it multiplied a little like – well, rabbits.” – Leah Hyslop, London Telegraph, Sept. 3, 2013