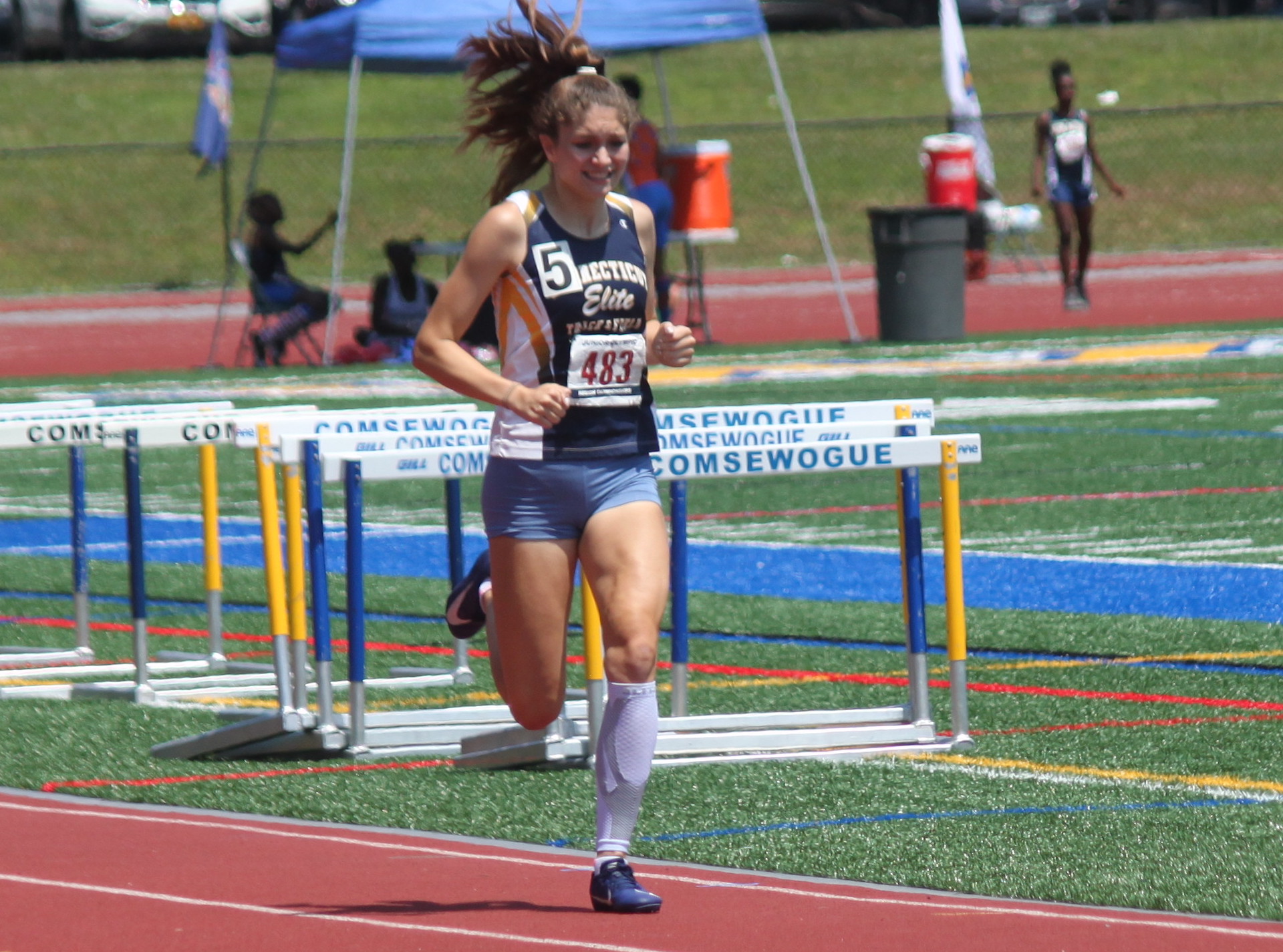 Seven athletes from Wilton-based Connecticut Elite Track and Field qualified for the USATF National Track and Field Championships at the regional championships held last weekend in Port Jefferson, Long Island. Two of the athletes hail from Wilton; five of the qualifiers will take the trip to compete in Sacramento beginning on Monday, July 22. 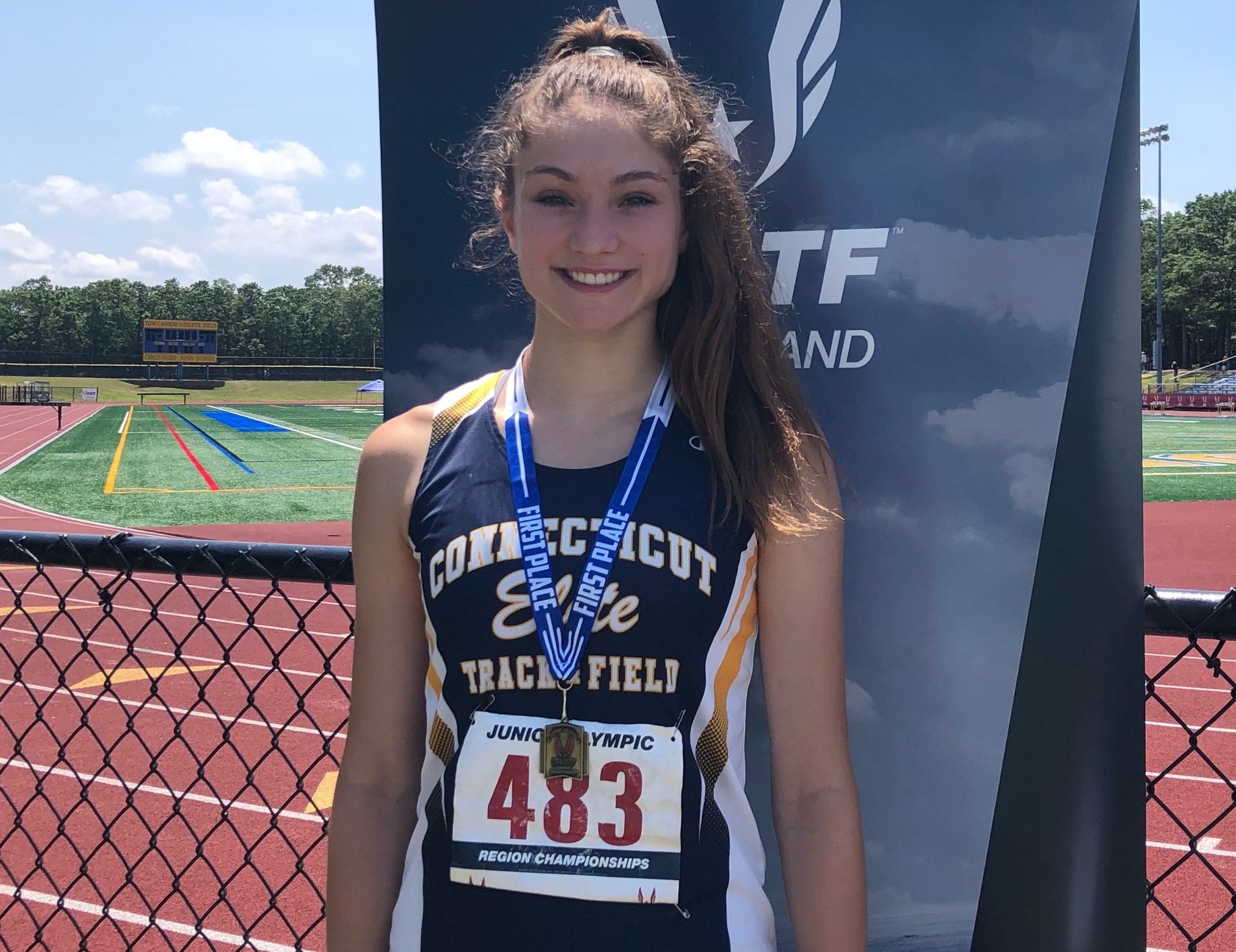 Shelby Dejana (left and above) of Wilton qualified by winning the 15-16 year old division heptathlon, which is seven events over two days.   She won with a personal best point total of 3,619 which was 220 points ahead of the second place finisher. Dejana also placed second in the 100-meter hurdles in a personal best time of 15:09 and second in the 100-meter dash in 12:54. She will be traveling to compete in California in all her events. “Shelby is a remarkable athlete and has been knocking at the door in trying to qualify in the multi-events, placing third by one point the last two years. The multi’s and hurdling are what we have focused on an it is clearly paying off for her,” explained coach Kevin Foley. 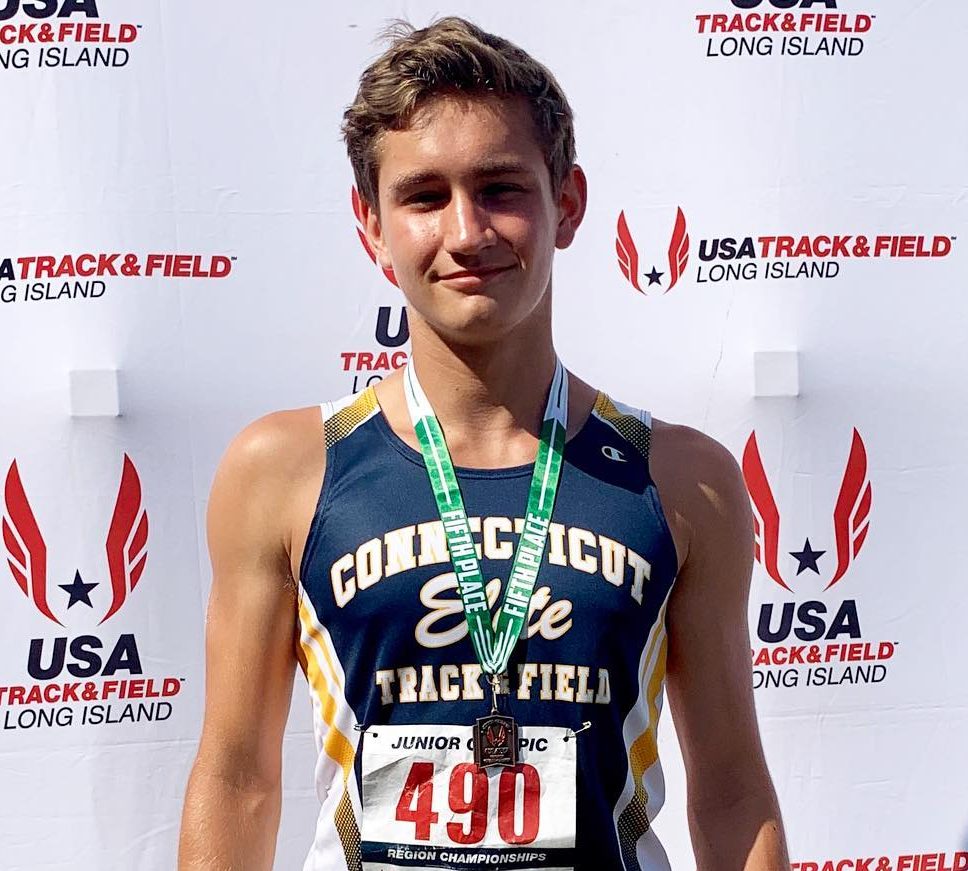 Jack Myers (right) of Wilton took fifth in both the 100-meter and 200-meter in times of 11.40 and 22.95 respectively. This is Myers’s first year in track and field and he has personal bests of 11.12 and 22.75 in the 100 and 200. “Jack is a very dedicate athlete and has a tremendous amount of potential as a track athlete. He trains hard and is an awesome addition to our club. I expect some pretty significant performances from Jack as we move forward,” Foley said.

Emma Langis of Ridgefield will be running in her second national championship meet of the season after placing third in the New Balance National High School meet several weeks ago. Langis ran a time of 61.46 in the 400-meter hurdles, just seven seconds off her personal best time she ran at New Balance to become the Region 1 champion over the weekend. “The 400 hurdles may be the most demanding of all track events. Emma has been working on her pace and rhythm over the past three months and she has decreased her time by almost 2.5 seconds. She can go much faster and I suspect she will,” Foley commented.

Kayla Clark of Bridgeport was the third regional champion for the CT Elite by jumping a personal best of 37 feet, 5.25 inches to win the triple jump. Clark also finished second in the 17-18, 100-meter hurdles in 15.19 seconds. “Kayla is a very powerful athlete and a great jumper and hurdler. She has worked very hard to improve all the phases of her jump and has her sights set on surpassing 38 feet. I have no doubt we will see that happen in the near future,” Foley said.

Ashley Nicoletti was the fourth regional champion for CT Elite as she took first in the javelin with a throw of 86 feet 4 inches. “Ashley just started training in the javelin in June, so her progress has been tremendous,” says Foley. Nicoletti also took fifth in the 200-meter with a time of 26.95 and second in the high jump with a personal best jump of 4 feet 11 inches to qualify for the national meet. “Ashley, like Shelby, competed in the heptathlon (fourth place finish) for two days prior to the individual events so it makes it that much more special that she did so well in her individual events. She works very hard at her craft,” Foley added.

Mariella Schweitzer of Redding placed second in the long jump with a jump of 16 feet 5 ¼ inches and third in the 15-16 100-meter hurdles in a time of 15.44 seconds.  “Mariella has been training with us since the 5th or 6th grade and just continually gets better and better. She is another hard-working athlete who will put up some tremendous marks before she finishes high school,” Foley notes.

Finally, Jordan Sandell of North Salem, NY took second in the long jump with a jump of 15 feet 3 inches and third in the triple jump with a jump of 33 feet 9 inches. “Jordan is actually just starting to peak again after taking some time off after the high school season. She jumped very well at this meet and our goal is to improve that in the coming weeks,” Foley said.

The USATF National Meet will take place from July 22-28 in Sacramento, CA at California State University.