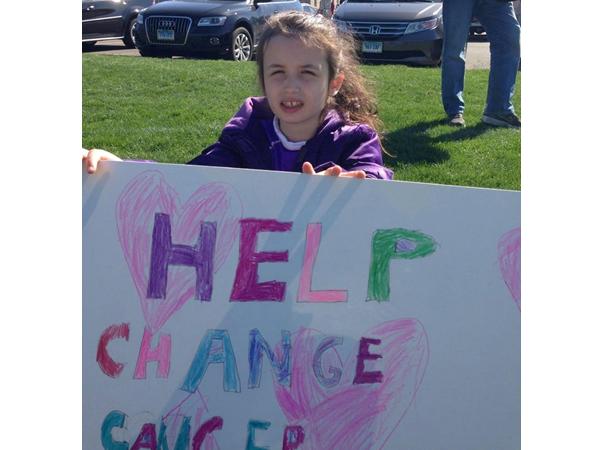 Sometimes the best ideas are the simplest. Just ask a child, and she’ll find the simplest, easiest way to cure cancer, or at least try.

That’s what 8-year-old Alexa Steckel did. The Cider Mill third grader created a cancer charity last year called “Help Change Cancer.” It is based on the simple premise that simply collecting just coins can go a long way toward beating cancer.

“People give me change, some people give me dollars. So far since we started, we’ve collected about $2,000. People can donate on my website, HelpChangeCancer.org, and also sometimes I go places and people donate there.” Some of those local places have included outside the Village Market, at the Wilton Public Schools Tech Expo, and on the sidelines at her older brother’s Everton Soccer games.

“I started “Help Change Cancer” because my great aunt died from pancreatic cancer, and I don’t want anyone else to get cancer. So that’s why I started it.”

Since kicking off her fundraising, Alexa has been donating what she collects to the American Cancer Society. But now that she and her family joined the Wilton Cure-iors team taking part in the Million Mile Run for Alex’s Lemonade Stand Foundation, she’s donating the change she collects in September to ALSF, which focuses specifically on pediatric cancer.

Editor’s note: money donated on Alexa’s HelpChangeCancer.org website will continue to go to the American Cancer Society; any change she collects outside of that will be donated to ALSF. People wishing to donate to the Wilton Cure-ior effort in Alexa’s honor can do so on the Cure-ior’s team page, here.

“My mom told me about the Cure-iors team and asked if I wanted to do it. I said yeah, because I don’t want anyone to get cancer, especially kids. I want to raise enough money for medicine for the kids in Wilton who have cancer, and for kids all over the world,” Alexa explained.

It’s clear Alexa has the innocent take on the world that goes along with her young age. She’s a typical kid, one who plays piano and loves cheerleading. “Yesterday we cheered for the third grade tackle team, and they SO beat Darien!”

But this “just regular kid” is also helping inspire other regular kids to pitch in and help do what they can to save the world. Recently, some friends watched her run and she recruited them to join. “They just ran with me.” Showing the other kids that no matter how small or young, anyone can do something is one of the beautiful things about all of this.

“I hated to run before this, but now I love to run.” Part of the reason, said Alexa, is that she’s logging miles by running and walking with her family. “We do it as one big team. My brother did 10 miles last time. I only do up to two or three.”

The Steckel family is running together to log their 100 miles. They’ve come up with an ingenious way for the kids to know how far they’re running. A roundtrip on their driveway is one-fifth of a mile; five back-and-forths marked with tally marks after each lap, and Alexa and her siblings, Owen (10) and Maxfield (6) are eagerly keeping track and racking up the miles.

Alexa has received a lot of encouragement on the Help Change Cancer facebook page, which her mother, Julie, runs. Most amazing were the posts made by Jay and Liz Scott, the co-executive directors of Alex’s Lemonade Stand Foundation, and parents of the original Alex whose own remarkable battle with cancer inspired ALSF.  “Thank you, Alexa, for your inspiring work to help change cancer! I am Alex’s mom from Alex’s Lemonade Stand and I want you to know that we are honored that you are working so hard for the Million Mile Run. Keep up the great and inspiring work!”

That kind of adult encouragement has just made Alexa work harder, according to her mom. “I read all the posts to her and I love watching her face light up.  As a Mom, knowing she conceived this idea and works hard to Help Change Cancer means she realizes that we can all make a difference, no matter how young or old we are, and that even small things (such as spare change) matter.  The posts people write to her make her so proud and reinforce the message that she can make a difference.”

Julie is  grateful for the support the Wilton community has shown her daughter. “People just show up at our door with change to give her. They’ve been so generous, and she’s always so thrilled. I know she wants to thank those people.”

Knowing that cancer doesn’t discriminate, even in Wilton, is motivation enough for Alexa. “She is driven to run, especially since she knows that kids in Wilton are battling cancer, and she wants to help them feel better.”

What can you do to help Alexa and the rest of the Wilton Cure-iors? Visit the team’s fundraising page, or go to Alexa’s Help Change Cancer Facebook page to contact her mom. GOOD Morning Wilton hopes that even local Wilton businesses consider putting out change collection jars at their registers to add to Alexa’s efforts.

GOOD Morning Wilton is proud to be the media sponsor of the Wilton Cure-iors.