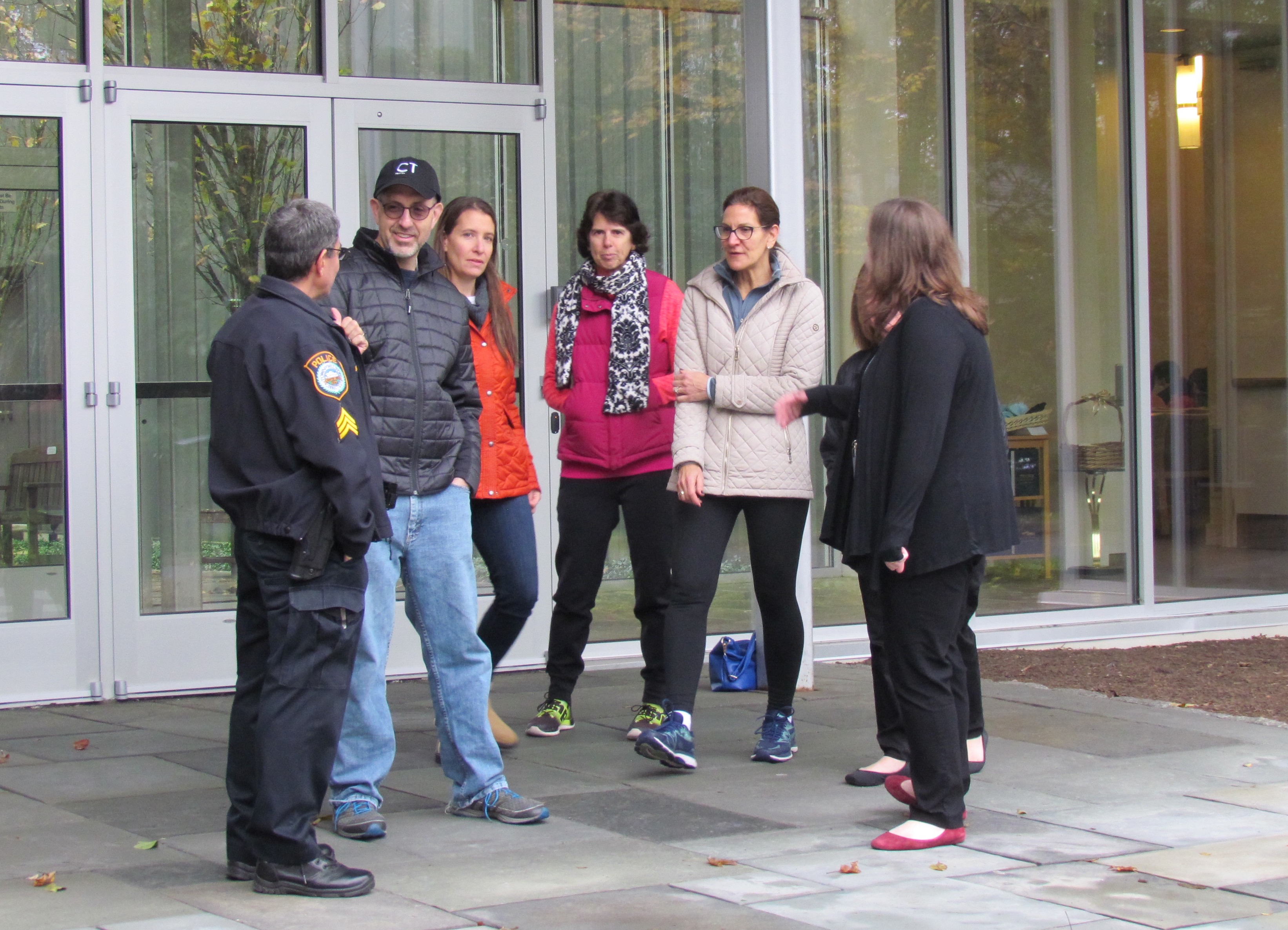 Fear and shock rippled through the country Saturday morning following news of an anti-semitic terrorist attack at a Pittsburgh synagogue, which claimed the lives of 11 worshipers. Here in Wilton, the murderous rampage has been particularly painful for members of the town’s Jewish community.

At the time of the mass shooting in Pittsburgh, Rabbi Rachel Bearman of Temple B’nai Chaim (TBC) in Georgetown had been leading Saturday morning Shabbat service for her congregation. “I am shaken, horrified, and heartbroken by this attack.  It is beyond imagining,” wrote Bearman in a message to TBC members.

Wilton resident Dina Gumins, a past president of TBC, felt the same way. “It sickens me,” she said, standing outside the synagogue the following morning, welcoming families as they arrived to bring their children to Sunday religious school. Standing with Bearman, Gumins and other executive board members outside the main entrance was Sgt. Arnault Baker of the Wilton Police Department, in full police uniform. In addition, parked at the front end of the parking lot were two police cruisers, one with an officer from the Redding Police Department and another with a colleague of Sgt. Baker’s from Wilton.

“I got calls from congregants from the very beginning,” says TBC president Cindy Baulsir. “For responses, what are we doing? People want to add more security, asking, ‘Do we have enough?’ So we’ll have to have ongoing conversations, just as every community in the country is having now.”

She was concerned about how the children coming to religious school classes, as young as 4-years-old, might be afraid to see a police officer standing at the front door.

“The kids are asking why they’re here, and we say, ‘They’re just looking over us, keeping us safe.’ It’s hard, we don’t want the kids to be scared, but we want them to know they’re supported. And that the parents to know there’s support. It’s a hard lesson. The problem is everyone thinks it can’t happen here. Yesterday was a lesson that maybe it could. It’s really sad,” Baulsir says.

Typically, Redding Police have jurisdiction over the part of Georgetown in which TBC is located. But not only did Wilton Police send Sgt. Baker to the synagogue Sunday morning, they sent an officer on Saturday morning as well without even being asked, shortly after news broke about the Pittsburgh shooting. “They had heard we were having a B’nai Mitzvah service and they came over,” Baulsir says, adding that a Redding officer also came to the synagogue Saturday morning as soon as she contacted that department. “When I called, they came running. It’s super.”

In times of crisis, people often turn to their religious leader for comfort; but for Rabbi Bearman, even she had trouble making sense of the events.

“I wish I had words that could contextualize it and make people feel comforted, but I’m struggling to find the words because there are no words. It’s beyond words. So I focused on physical safety for us today, because we had kids coming into the building. Unfortunately we’ve had a number of these incidents where I’m broken with my congregation, rather than fixing them. That’s what I’m doing is being broken with them, while making sure they’re as safe as they can possibly be. And making sure that the love and support I’m getting from the interfaith community is shared because I know it’s bolstering me.”

In fact, the interfaith community was quick to reach out. Bearman says she heard immediately from other faith leaders throughout Wilton and Redding, finding multiple text messages from colleagues waiting for her as soon as she finished leading the Saturday morning service.  “I had messages from friends who are Wilton clergy, who wrote immediately to say, ‘We’ll be there, what do you need?'”

She heard from one member of the clergy from as far away as Mississippi–Rev. Dr. Jason Coker, the former pastor of Wilton Baptist Church, reached out to Bearman from his post there with the message, “Tell TBC I love them.”

Bearman and the TBC leadership are now planning to hold a special service during Shabbat worship next Friday night, Nov. 2, at 7 p.m., and are hoping that the wider Wilton community will join them in solidarity. They are calling the Community Shabbat Service, “Gathering the Sparks.”

“After the devastating violence of this past Shabbat, Temple B’nai Chaim invites the community to come together to welcome the Sabbath as one, interwoven family. This special service will be an opportunity for TBC members and the interfaith community to come together in friendship and in prayer as we honor those who were killed and injured in Pittsburgh’s Tree of Life Congregation. On Friday night, we will gather the sparks from our broken world and use that light to kindle our Sabbath lights. Join us.”

“The point of it is to wrap ourselves in the arms of our friends. Not just the Jewish community, but all of us, because people of all faiths from all backgrounds are hurting. So coming together and gather the light from each of us for Shabbat, I’m very much looking forward to being in that room with everyone. And I’m grateful to the community who is willing and excited to be a part of that,” says Bearman. “I know that I’m lucky to have that because not all of my rabbinical colleagues do. We are lucky.”

Baulsir hopes people from outside the TBC congregation will come to the service as a show of community strength.

“Because we stand as one. We’re part of a larger community than just ourselves. We do so many things together, and this is one of the really important ones–we pray together. We go to other faith communities during big events, and it’s important that we have it here. There are other vigils in towns near us, but this is the community we live in.”

For more information about attending the Gathering the Sparks service, visit the Facebook event page.