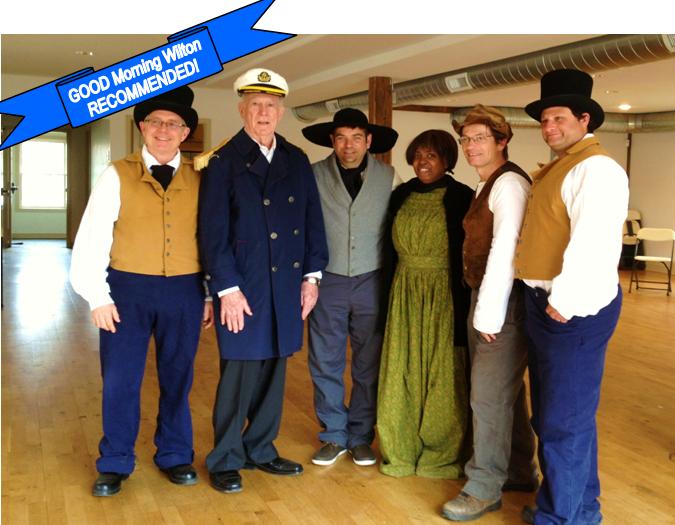 Wilton actually played a key role in the Abolitionist (antislavery) movement:  according to the Town of Wilton’s official website, “In the years prior to the Civil War, the antislavery movement was strong in town, and Wilton served as one of the stops on the Underground Railroad, a loosely organized escape route to Canada for runaway slaves.” As noted, this route was “…neither underground nor a railroad, (and) provided a series of safe havens, or stations, for fugitive slaves who were making their way to the Northern states, Canada or other locations.”

The Ovals, the Seeley Rd. home owned by “Stationmaster” William Wakeman, (now privately owned) and the only home in Fairfield County listed as a site on the Underground Railroad, had a tunnel that was accessible by a trap door through which runaway slaves and their escorts could pass and remain until it was safe to travel to the next stop. As a “Conductor” on this route, Wakeman is also credited with traveling to nearby towns with fugitives hidden in his covered wagon, at great risk to his personal safety. The Fugitive Slave Act of 1793 made it unsafe for any slave to be caught, even in a free state, and bounty hunters were paid handsomely for the capture and return of runaway slaves.

The fascinating and harrowing experience of runaway slaves on the Underground Railroad will be simulated at Ambler Farm on Friday, May 9 from 7:30–9:30 p.m..

You may be the parent of a 5th grader who has gone on the very successful Cider Mill field trip simulation to Ambler Farm , or you may have been lucky enough to have chaperoned, but this evening program will have added intensity due to the darkening skies of dusk and the maturity of the participants.

Program participants will play the role of individuals who were kidnapped by slave traders in Africa, forced to walk hundreds of miles to the coast to board a ship bound for America and – despite great suffering, disease, malnutrition and torture – have arrived to be auctioned off as property.  They will learn the harsh details of “life” aboard the slave ship, and get a taste of how the slave auction worked.   They will then embark on their journey as runaway slaves on the Underground Railroad, moving from safe house to safe house – set in the Farm’s barns, ice house, and corn crib — with their conductor.  Along the way, they will meet Harriet Tubman, Wakeman, Eli Whitney, a sheriff and a bounty hunter. Some may not make it to freedom.

Kevin Meehan, Ambler Farm’s program manager and organizer of the experience, said, “We really try to help participants imagine what it must have been like to be kidnapped and taken from their homes and families, what it might have been like crossing the ocean in a slave ship and finally being sold like an animal at auction.”

Meehan noted that for the fifth-grade trips, the program is adjusted and “toned down” for the children’s age and maturity level, and the adult program will be accordingly different. “We do tell teachers and students to expect some frightening moments, as we try to create an authentic simulation of what a runaway slave really experienced on the Underground Railroad. This program is adapted specifically for adults – probably most suitable for those over 18, and who can handle moments of suspense and sudden loud noises.”

The program time will be a one-hour-and-15-minute simulation followed by a 45-minute wine and cheese reception and discussion. Note: This program is not recommended for people with heart or mobility problems.  Please dress for the outdoors.