Home News Breaking News Bd. of Ed.: No Decisions Yet on Where to Cut... 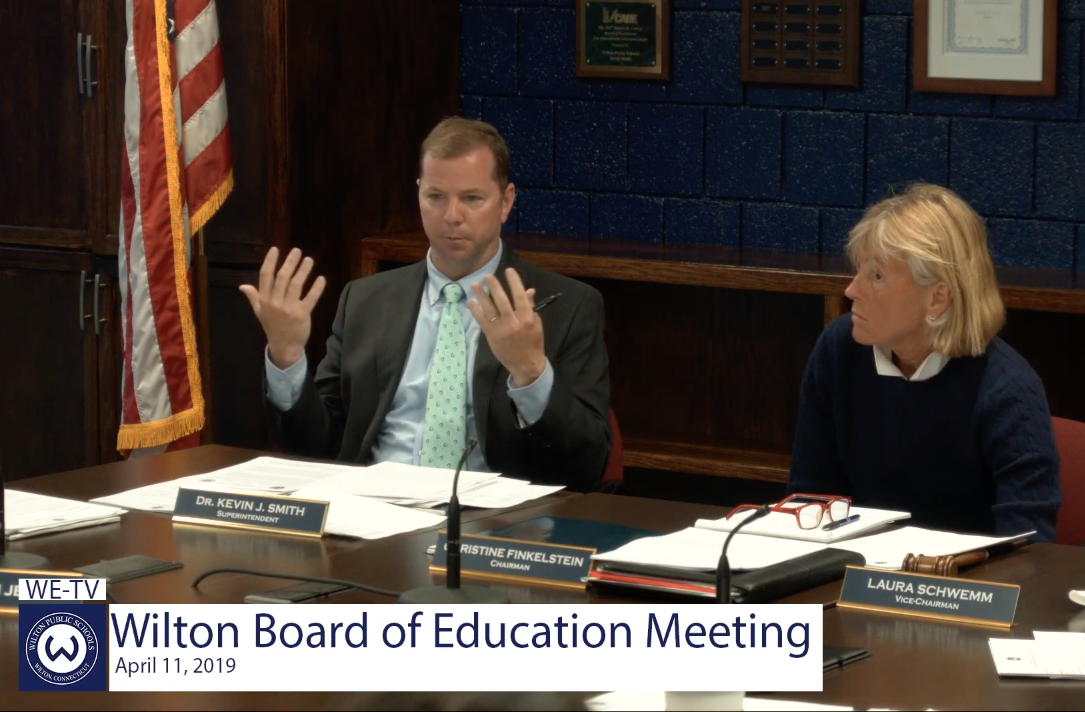 At last night’s Board of Education meeting, observers were waiting to find out what decisions would be made about cuts to the proposed FY2020 school budget. After all, last week, the Board of Finance had told the BOE that it had to reduce its requested budget by $1.1 million.

Instead, BOE chairwoman Christine Finkelstein led off her chair’s report by saying that her board wanted more time to carefully review where to find those cuts, which she called “unexpected” – and acknowledged the how the difficulty ahead was “more challenging and time consuming” than the board anticipated.

“In the week since the BOF unexpectedly reduced the budget we had approved for the 2019-2020 school year, only one thing remains certain:  $1.1 million is a lot of money. Because of the magnitude of these cuts and because our budget was already so lean to begin with, we believe this slower, more methodical approach will be more beneficial and  thoughtful way to proceed.”

Instead, Finkelstein said the board would use the time to “clear up misreported claims” made by the Board of Finance, and hear from Superintendent Kevin Smith about his “priorities and concerns.”

She also thanked residents who have expressed support for the district in the days since the BOF announced its cuts, and warned that further cuts could still come at the Annual Town Meeting on May 7.

“I urge all supporters of our schools to attend the Town Meeting and be ready to vote should a motion be made during the meeting to reduce our budget.”

Board member Glenn Hemmerle made an appeal following the superintendent’s report, during which Smith told of numerous awards the schools had received as well as described a variety of events that had taken place throughout the previous week.

“The litany of recognition and outstanding performance that Dr. Smith just went through is all the more reason to be concerned about the reduction that we face in our budget and the risk we face going forward if it increases. We just have such an outstanding school system, and the recognition our students get as a result of the effort our teachers and administrators put forth, it’s beyond compare. It is frustrating to sit here facing what we face,” he said.

Smith said he and his administrators are reviewing programs, priorities, and spending proposals. Their order for prioritizing how to assess where to make cuts are:

He said one of the first things his team has already done is implement a freeze on current spending, and that they will review where, if possible, to apply any potential savings to next year’s proposals.

Smith mentioned discussion during the meeting on April 1 of the town’s three main boards of a Board of Education “reserve account”–referring to remarks made about a Continuing Education account, which currently has $1.19 million in it.

“The account that was referred to is not a reserve account. There are funds in that account. It has grown over more than a decade and there’s a sizable surplus. Historically, that account has been used to reinvest in programs and facilities that are used by the continuing education program and also used by the schools.”

Smith said since the BOF focused on the existence of the account he has looked more closely at why and how it got there.

He then said that after conducting analysis of the funds, officials learned that not only has the account grown due to “program expansion” but also because for many years the district has covered other costs for the department, including payroll fees and benefit contributions.

Smith said these accounting issues–totaling approximately $445,000–went back as far as 2005, and were due to the fact that, “…for many years we’ve operated using manual processes in our business department and it was only recently that those were identified.”

Smith said he has been aware about the existence of the account since 2015, and believed the funds were used for program improvements.

He also noted that the district has had three different CFOs in four years, and that the current CFO–Anne Kelly-Lenz, who is shared by both the town and the school district–works part-time. When she started working with the district last year, they had to economize where she spent her time, focusing on updating operations as well as getting accounting processes in order.

“In trying to manage the priorities in that office, our first priority area for examination was in our chart of accounts and our general ledger, and moving the transition to New World [software]. After we got that set up we were moving on to closer examination of other accounts like Continuing Education and Activity accounts.”

Smith took responsibility if the existence of the account surprised anyone. “That’s on me, because I was not focused on those funds because we have a plan and we were focused almost singularly on managing our current accounts.”

Smith then addressed another topic brought up by BOF members–teacher salaries–something that he said was raised in an OP ED; this referred to an opinion piece penned by BOF member Peter Balderston and published earlier this week, suggesting the next contract negotiation with teachers would be a place to look for budget savings in teacher salary changes.

“I think those are terrible ideas. Our teachers work very hard, and they live and work in lower Fairfield County, where the cost of living is not the same where you move up I-91 and 95,” Smith said.

He noted that a report cited by Balderston which ranked teacher salaries by CT town. The report lists Wilton as the town with the third highest teacher salary in the state.

“That could easily be misunderstood to suggest we are at the top paying our teachers. I want to clarify that information.” Smith described a salary analysis performed by the district which broke out the different pay levels based on teacher experience, and in several categories, Wilton is 6th or 7th highest out of nine schools.

“What drives the average salary to be the third highest in the state is that 66% of our teachers are at or above the maximum step in the contract, which means they’ve been the district at least more than 15 years, with 15 steps in our contract. Think about that, 66% of our teachers have been in district 15 years or more and have that level of experience,” Smith said. “We have a very veteran staff, and that’s a good thing. Our students and families benefit from that level of experience. And our turnover rate is less than 5%.”

He added that the district takes opportunities “when it makes sense” to replace retiring, “more expensive” teachers with “less expensive” beginning teachers. In other priority areas–he specified mathematics as an example–where the district is “looking for the best and most experience, so we make a financial choice to invest in experience.”

Smith said, “It speaks to the quality of instruction.”

Finkelstein added her thoughts. “That’s a desirable place to be, with 66% of teachers, here and knowing the community and having the rich experience, and wanting to stay. They’re invested in our community and our students.”

Smith said he is proud of having experienced teachers.

“I think about what it is we’re trying to accomplish and our kids really get the added value of teachers who have walked the halls and lived our classrooms for more than a decade, it really matters.”

Board member Deborah Low, a former superintendent herself, said that teachers are “the heart of this district.”

“To not respect stability, experience, expertise, excellence and passion is cutting at the core of our instruction. It starts with quality teachers, and we have got to absolutely invest, maintain, attract, keep them, steal them, kidnap them, and make sure that they want to stay. I understand the look of that list, and obviously it is expensive, but excellence in education is expensive.”

“You have to understand the qualitative and the only way to do that is to look in the classrooms, and first hand see the diversity of the student body, to look at the different strategies teachers are using minute to minute to engage different types of learners. We do a disservice when we only focus on numbers. People who really want to understand our operation you’ve really got to come and see.”

Finkelstein called it “shameful” that the information was presented the way it was, and Smith added that, “Complex information reduced to soundbites does a disservice to the people who work in the district and the work they are doing.”

So Where to Cut?

Smith is concerned about where to make cuts without the time to analyze how reductions will impact educational benefits. He says prioritizing the alternative school initiative is still very high, but is worried about where the $1.1 million will be found.

“If I have to choose, I’m going to choose to keep existing programs rather than implement new programs, if that’s the choice,” he said.

He added that it’s a hard to even start weighing the choices out.

“It’s dangerous to go back into an operating budget and too look at existing programs because the motivation is not based on an educational benefit, it’s based on finance. That is the wrong calculus to make a decision like that.” He used an example of other communities that cut elementary level world language programs. “To do that out of a financial calculus is a mistake. I would not want to dive into any conversation about any of those programs with my back against the wall, without having done a really good, thorough education benefit analysis, and I don’t think you can do that when you’re under the knife threat of a million dollar cut. That’s got to be done separate from any budget conversation, and having a financial filter skews that entire process.”