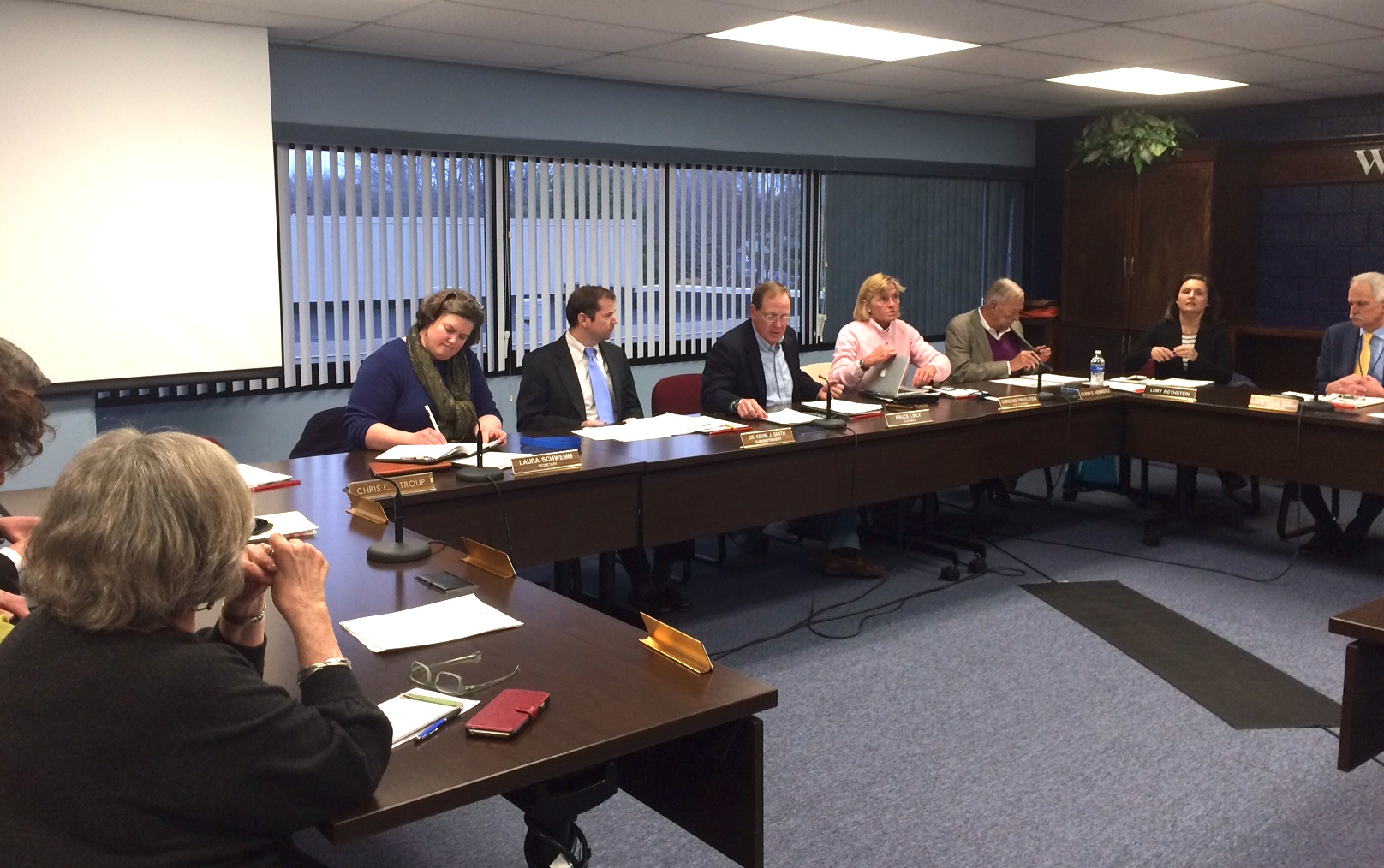 At last night’s (March 31) Board of Education meeting, the Board voted to support superintendent Kevin Smith’s recommendation to uphold the existing Policy 6147 of not weighing grades. The vote was split 4-2, with board members Glenn Hemmerle, Lory Rothstein, Laura Schwemm and Chris Stroup voting to keep the policy as is, and Chris Finkelstein and Bruce Likly voting in support of a change to a weighted grade policy.

Thursday night’s vote was the culmination of more than a year of discussion, including a unanimous decision at the last Board of Education meeting on March 10 to push off the vote until last night, at Stroup’s request. Stroup, who had asked for the postponement because he wanted to further consider the arguments his fellow board members had made, finally came down on the side of not weighing grades.

During the Board’s discussion on the issue, Likly, the BOE’s chairman, noted that the Board had heard from many parents on the issue. “We had heavy inboxes this week due to weighted grades.” He read one of the emails from a parent who asked that, “the Board consider not voting on it this evening because we are moving too quickly to make a vote at this time.”

Finkelstein disagreed, responding, ”I think a year and several months is enough time and I move that we vote.”

Stroup asked, “Can any decision we make be reversed or reconsidered if we uncover certain information (after the fact)?”

To the latter, Likly answered, “‘Absolutely – this goes for any decision we make.”

Finkelstein said, “Since we last discussed this, more parents have (given us examples) how they have been affected negatively due to this policy. These parents are talking to admissions officers who are telling them, ‘Your child did not get a merit scholarship because the weighted grades weren’t there. They didn’t gain admission because the weighted grades weren’t there.’ We need to listen to these parents.”

She told another, descriptive anecdote from a parent-admissions counselor interaction.

“It’s about the fact that our kids are performing on the college level and they should be rewarded for it. One admissions officer told a parent that, ‘Wilton kids are starting the race 10 yards back with a pack of rocks on their backs.'”

Later in the meeting, Likly said that the ongoing discussion of the topic had its merits. “We uncovered a number of issues when we looked into this policy that are now being addressed:  grading and instructional inconsistencies, guidance and college counseling inconsistencies, increases in stress that teachers believe will happen, and concerns about drops in extra-curricular activities.”

Schwemm said that she did some research on what colleges and universities are doing regarding admissions and grades, citing the University of California, Berkeley (where she attended graduate school) as an example of a highly-competitive school that does not look at applicants’ transcripts unless and until they are admitted.

“If you get in you have to provide proof of the grades that you’ve self-reported, but they’re moving away from using grades as an important indicator,” she said.

Schwemm also argued that weighting grades would be potentially divisive.

“Go back to Dr. Matt Greene’s point at the last meeting: your GPA will reflect what your grades were. Weighting grades will help these kids who are taking AP classes and getting A’s. Our vision is that we are here for every student. When we have lifted up our children at the other end of abilities—that shows me success. We’re here for every student; we should focus on teaching and learning and preparing our students for what comes next,” whether it’s the Ivy League or another more probable path.

Stroup, who had refrained from choosing one side over the other in the last meeting, said he thought the issue deserved even more study. He said he was, “troubled by lack of empirical data and that we can’t come to a consensus. I am also troubled that the superintendent and some teachers are not in favor of something that others are so clearly in favor of. Certainly, if the administration was going to support a plan that would have no adverse impact and it wouldn’t cost us any money to implement, there’s no downside there.  I don’t know why we feel the need to reach a conclusion – (when) continued study on it is merited. I’d like to consider it further and create some empirical data.”

But, he added, “As it’s framed today, I would support the administration and teachers.”

Rothstein brought up a different point, saying, “Why does this fall on the plate of the BOE? We don’t have the authority for grading. Westport, Weston and New Canaan do not have a policy whether or not they weight grades. They do weight, but it’s administered on the school level, not the board level. The law says the schools should state a policy; we don’t know if that’s still the case. Even if we vote tonight, we will constantly be looking at ways to improve it.”

Hemmerle said, “If we populate our AP and honors courses appropriately with students who are capable of doing the work, they will earn their A’s. But for a student who wasn’t identified as able to take an AP course, and gets an A [in a different level class], why shouldn’t they both get the A? GPA is only one piece of the equation. There are so many factors, and colleges can do whatever they want” in terms of admissions policies.

Following the meeting on March 10, we posed the question to GOOD Morning Wilton readers and they mirrored the board’s eventual:

28 (17.3%) WHS should offer BOTH weighted and unweighted grades

In an unrelated note, Smith in an “unscripted” announcement, called on WHS senior Alex Scaperotta, who was handling the IT for the meeting, to share some recent news. Alex said that just that morning he had received word of “a full scholarship to the University of Rochester,” prompting a standing ovation from all those present. Alex said he hasn’t committed yet and that he also had been accepted into Bucknell and Tufts.

Perhaps it ironic, but he achieved those success, even without a weighted grade system.