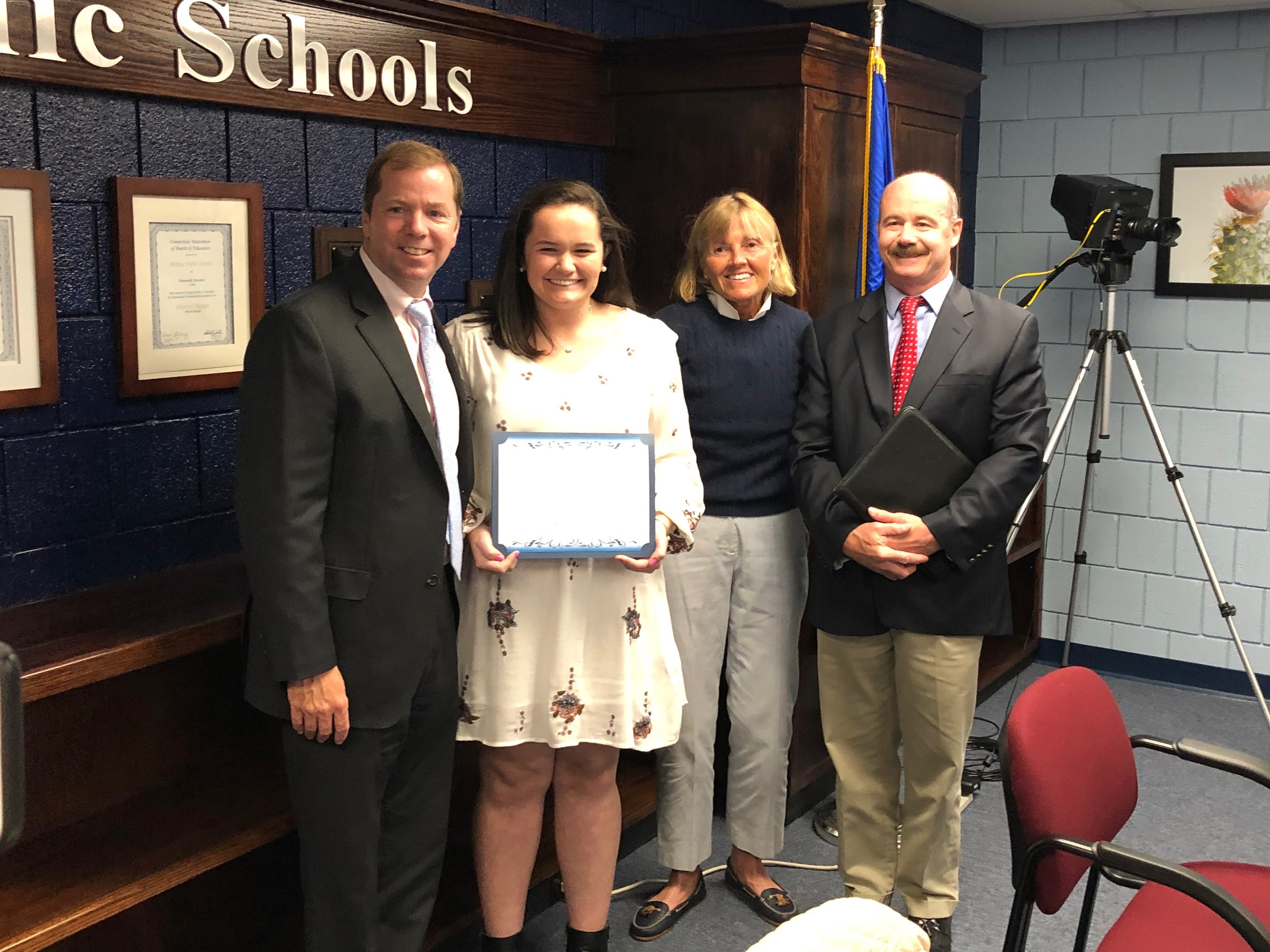 At the Board of Education meeting on Thursday, May 9, four Wilton students were awarded CABE (Connecticut Association of Boards of Education) Student Leadership Awards.

School staff are asked to nominate students who exhibit leadership skills that include:  willingness to take on challenges, capability to make difficult decisions, concern for others, ability to work with others, willingness to commit to a project, diplomacy, ability to understand issues clearly, and ability to honor a commitment. 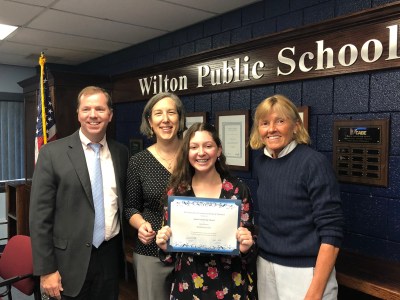 “Carly Pierson is an effervescent young lady who brings joy to those around her–teachers and students alike. She is a member of Team Change, a group that promotes positive change in the school environment. Carly was also one of the founding members of the Upstanders Club, a group that speaks out and works against bullying in our school. In her classes, Carly works very hard and pays attention to details in order to go the extra mile. Quietly and unassumingly, she is a role model for the other students. She speaks up, ask questions, and always tries her best. Her teachers love that she is not afraid to be herself and is confident in her own skin. Outside of school, Carly is an accomplished equestrian who qualified for Medal Class of Fairfield County, a very selective and challenging riding class. She successfully competes as an equestrian most weekends and is able to manage her schedule and school work well. We are very proud of Carly, and we look forward to all that she will accomplish in her future with all her kind and caring ways.” 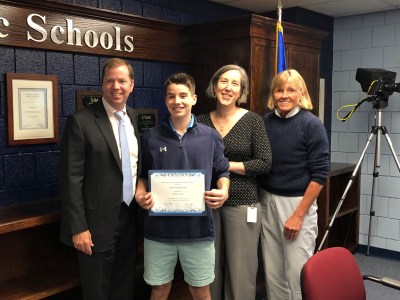 “George Hahn is an exceptional CABE leader. Not only is he kind and caring with all of the members of the Middlebrook community, George is very involved in activities in the school. He is a member of the WEB Committee and Upstanders Club. George helps to create a safe and welcoming environment on the 8 Green team. He is a leader in every single class that he attends, and does so with a bright attitude and a warm ‘Thank you,’ at the end of the day. George is not only a scholar, but he is also an athlete. While being a straight A student throughout his middle school career, he has been playing, football, basketball, lacrosse, and tennis. He is an accomplished member of the Wilton Lacrosse Team and also plays with the Express Premier League. We are proud to be able to present George as Middlebrook’s CABE Student Leader.” 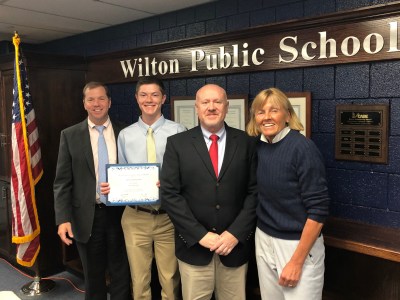 “Kace Stewart is an Eagle Scout. Through Boy Scouts he has developed a commitment to preserving our environment. Kace has been a team captain of the junior varsity soccer team, he is a committee chairperson for the Future Business Leaders of America and vice president of the Stock Trading Club. Kace is also a squad leader in marching band. Kace participates in Peervention, an organization where students chosen by faculty are trained to assist other students through difficult situations. As a member of Peervention Kace has been a mentor to a middle school student, a panel speaker during eight grade orientation and a student trainer. He is currently an executive council member of the organization. Kace can always be counted on to volunteer and to follow through when called upon. He is often the first to arrive to an event and the last to leave. Kace Stewart has contributed much to the enrichment of the WHS community during his high school years and represents the best of our youth.” 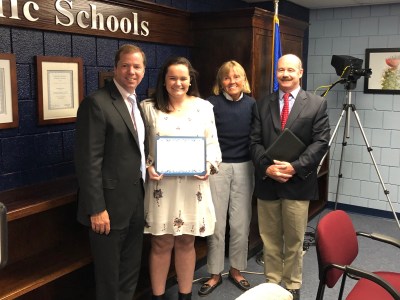 “Madeline Burke has taken on leadership roles within the Student Government and Student Senate and has been a member of the Wilton Public Schools Science Curriculum Committee for the past three years as a student representative. Her involvement in clubs such as Prom Committee, Top Inclusion Models, SafeRides and Amnesty International have also played important roles in her high school career. Additionally, Madeline founded Project CARE which works to foster positive relationships between local police and the community and was one of two students chosen as a student ambassador for the County Assemblies 2018 Charity Ball. Madeline has played basketball for three years and uses her love of the sport to give back and enhance her leadership skills. She is captain of the varsity basketball team, coaches a local youth clinic, and participates in a mentorship program with young athletes.”