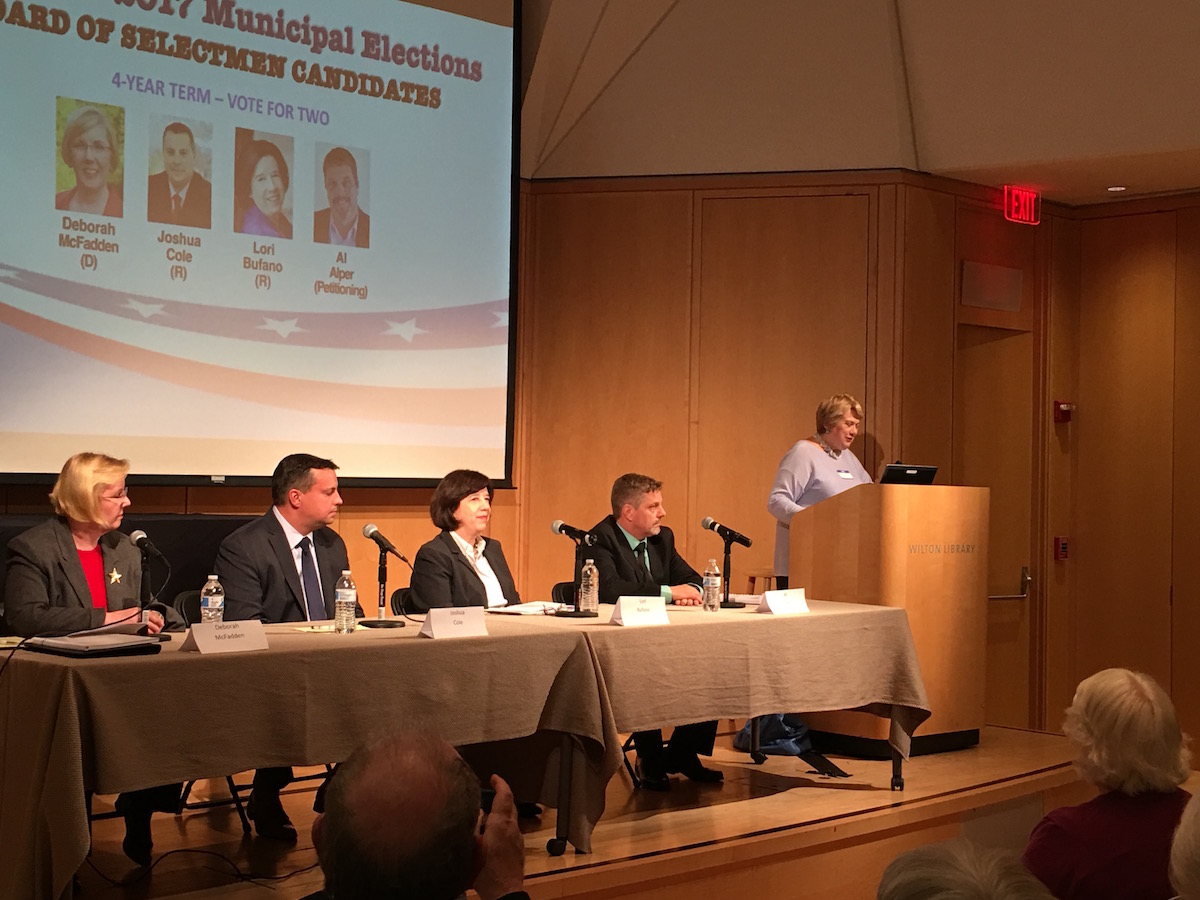 At last night’s Candidate Forum for the Board of Selectmen, there were four candidates sitting onstage at the Wilton Library to answer questions in advance of the upcoming municipal elections. And while the group was half as small as the previous night’s forum with nine Planning & Zoning Commission candidates, the differences between the four Wiltonians running for the two open spots were much more apparent–differences in style, approach, experience and personality.

The Forum was sponsored by the Wilton League of Women Voters, the Wilton Library and GOOD Morning Wilton.

There were also some questions which touched on more philosophical questions of governing, including: how to get more residents engaged in town participation and increase voter turnout (and even whether voter turnout should be increased); whether they each could represent unaffiliated voters even as candidates who are affiliated with political parties; and whether Wilton’s political process is working or needs to be changed.

The chair of the Republican Town Committee, Bill Lalor, had this to say about his candidates:  “I thought it was another good night for the GOP-endorsed slate. Lori Bufano and Josh Cole demonstrated that they have the right experience and temperament and have studied the issues. They both articulated strong positions on conservation and development, keeping costs and taxes at bay, and trying to enhance town amenities. What came through last night from all the BOS candidates and questions was that Wilton faces a difficult road ahead, and Lori and Josh showed they are thinking creatively and proactively and will serve us well. Their experience is exactly what Wilton needs at the BOS.”

Bob Carney, the spokesperson for the Democratic Town Committee, had positive words for his candidate too:  At Thursday’s Candidate Forum Democrats articulated a vision of careful economic growth coupled with the preservation of Wilton’s greatest assets: its quality of life and excellent schools. Deb McFadden’s professional history as a trouble shooter and problem solver in the mayor’s office in Salt Lake City gives her a unique understanding of how municipalities work and was something she brought to her previous experience on the BOS. She also reminded the audience of the advisability of having both political parties represented on the Republican-dominated BOS. If you do not vote for her and she loses, you will have no Democrats on the Board of Selectmen, since ‘unaffiliated’ candidates would fill minority seats. It is important to have a diverse viewpoint in town.”

In light of fairness and equal time, we asked Al Alper, who is running as a petitioning candidate, for his thoughts on how he did at the forum. “Last night’s forum was an excellent opportunity to compare and contrast the four people running to serve the community on the Board of Selectmen. While I have great respect for my opponents, I believe that I, Al Alper demonstrated a stark and palpable contrast between myself and the others. With 13 years of volunteer experience, eight of them on the Board of Finance, and nearly 10 years as the Chairman of a volunteer committee I’ve demonstrated a depth of experience and long tenure of leadership. That experience gives me a unique perspective into what the heartbeat of the community is. My strong fiscally responsible position regarding smarter government, more efficient government, and less expensive government in Wilton is borne of that.”

As a sponsor of the debates, GOOD Morning Wilton has the privilege of bringing the video recording of the one-hour forum to readers. It’s our hope that we’ll be able to bring you a fuller picture of each of the candidates–who they are, what they represent, and how they’ll govern–to encourage readers to turn out to the polls on Tuesday, Nov. 7.