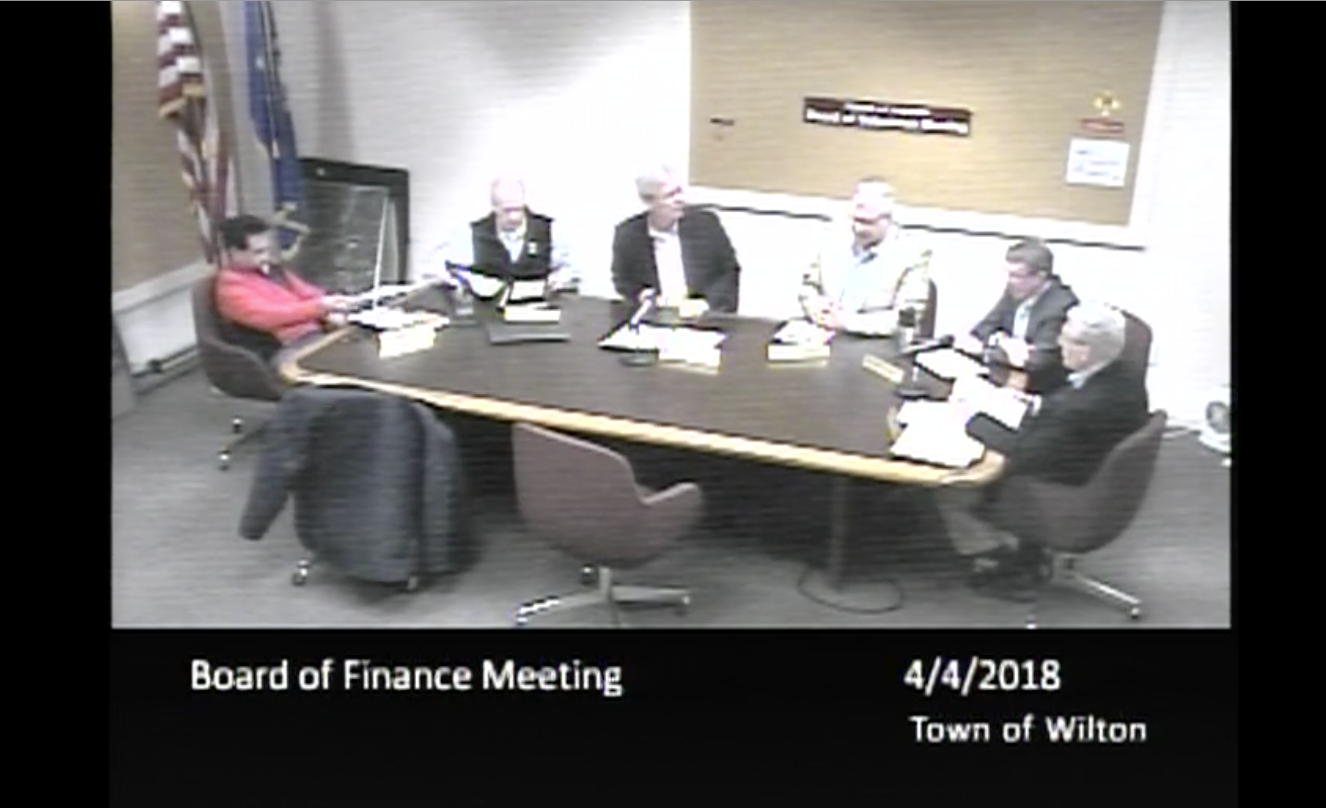 Before formalizing the proposed mil rate increase for FY’19 at its meeting last night (April 4), the Board of Finance revisited its decision from the prior evening about the reductions it made to the Board of Education budget. That happened after discovering a mistake that had been made in another area of the overall town budget discussion.

Board of Finance chair Jeffrey Rutishauser announced that a small mistake in the calculation of town revenues that the BOF made on Tuesday evening resulted in an additional $110,000 of revenues to the town. That mistake, he said, actually moved the needle on the mil rate calculation.

“I hair-cutted the revenues for a Town of Wilton property fund. That resulted in about $110,000 of revenue. By not hair-cutting it, that changed the mil rate.”

Hearing that, Richard Creeth suggested the mistake was “serendipitous,” and proposed adjusting the Board of Education budget as a result, by using the additional revenue number to lessen the decrease to the school budget. Rather than change the mil rate the BOF had agreed upon the night before, Creeth suggested lowering the BOE budget cut from $650,000 to $500,000, and keeping the same mil rate increase of 1.46%.*

Peter Balderston countered that originally he had been set on lowering the BOE budget increase even more than $650,000 from the proposed 2.24% to 1.0%, but that he agreed to a compromise of approving a 1.43% budget increase rather than the guidance of 1.0%. It reflected, he said, “a sign of good faith effort on the part of the BOE to tighten up their numbers and explain their rationale for the increases and how they’re managing expenses.”

Instead of having the $110,000 error benefit the school district’s proposed budget, Balderston said it should benefit the taxpayers.

Creeth said if the BOF changed the cut to $500,000, he would vote in favor of it; he voted against lowering the budget by $650,000 on Tuesday. “Sometimes you get opportunities to take a second look at things–this might be one.”

With Creeth’s vote change, Balderston said he would then back the budget decrease change to $500,000, because it was important to have more agreement by the BOF members behind the final mil rate number they agreed on–but he wanted to make a point before doing so.

“This is the last year I say this. Each year we get a lot of posturing as we go through this cycle. ‘We’re going to get a five-year model,’ and all that kind of stuff. The problem I have is when we are asked to absorb sentiments about how wonderful the school program is without any kind of backstop that supports it in a quantitative manner, the way parents who come to this town will look at it. I have not seen a level of discipline–until recently–coming out of the school board that gives me a level of confidence, that when they say, ‘We’re cutting bone! We’re cutting bone!’ they really know what they’re talking about. [Former BOE chair] Bruce Likly put in ‘From the Board Table’ that we had a five-year projection. We had nothing! We had nothing! And that’s inexcusable! To sit there and say they have stuff that’s supposed to impart financial discipline is nonsense and I’m not going to tolerate it anymore. It’s enough,” he said.

Creeth agreed, but noted that there has been progress.

Walter Kress also stressed pushing for stricter financial modeling and adherence to watching enrollment figures. “There’s value to that for those of us that live and die by numbers. It is that important for not coming back next year and simply taking this year’s numbers and pushing them forward. And somewhere out there we’ve got negotiations of contracts.”

Ultimately, Kress said the change in numbers was relatively small, moving the per pupil expenditure increase from 2.9% to 3.4%–”At some point these are rounding numbers. What we’re talking about is $150,000 on a $126 million budget. The average number for a homeowner is probably going to be $20 or so.”

But having a unified board behind the ultimate mil rate decision was important too, Kress said, because a split board “tells the town that there’s confusion here.” He said he would be willing to support the $500,000 compromise as well, as it would still meet his objectives–a tax increase below 1.5%, that is below the rate of inflation, and that decelerates the rate of tax increases.

Rutishauser also reiterated having the board “aligned,” and spoke to the BOE hearing the frustrations of the finance board members.

“It doesn’t get your whole budget back but I think you’re hearing some things that are important. There’s a lot pent up, and we probably need to spend some time this spring and summer, that we feel those concerns–a lot of it is flowing through from the people in town–that we do need to start putting in three year plans, five year plans.”

The complete list of resolutions approved by the BOF last night as part of setting the mil rate were: