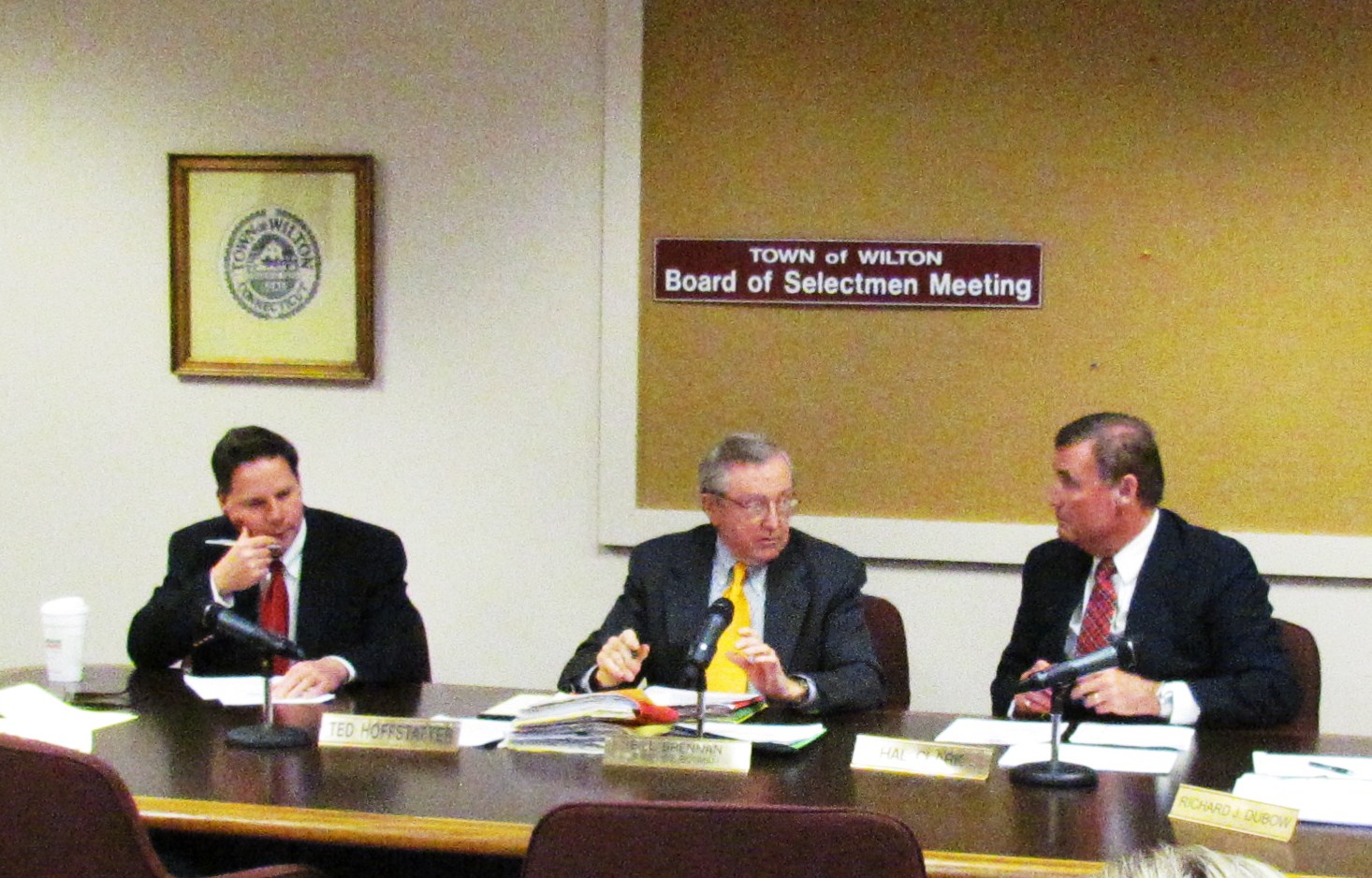 Monday evening’s Board of Selectmen meeting was relatively mundane–that is until the board went into executive session at the end of the meeting. Members of the public, press and town employees left the Town Hall conference room, including First Selectman Bill Brennan, because the remaining four board members turned to talk about whether or not Brennan’s salary should be raised.

The four selectmen who remained behind closed doors were Hal Clark, Ted Hoffstatter, James Saxe and Richard Dubow. According to a statements sent to GOOD Morning Wilton following the meeting, the vote was 3-1 in favor of a 2.5-percent wage increase, raising the salary of the town’s chief official to $132,750 from $129,500. The lone dissenting vote was Hoffstatter’s.

“Bill Brennan works hard for Wilton, and I have a tremendous amount of respect for him,” Hoffstatter wrote in an email he sent to GMW.com on Tuesday. “My vote against a pay increase for the First Selectman is in no way a reflection on him whatsoever. Bill is not just a fellow Board member, but a friend, who has served our Town well.”

Coming into budget season, the selectmen will begin to hear budget presentations and requests from all town departments. Hoffstatter referenced this process in his message: “My feeling is that coming into another tough budget year, we have an obligation to our constituents, our taxpayers, to put forth a fiscally conservative budget that still maintains essential services.  A pay freeze at the top would put us in the strongest position to push for a lean budget moving forward, with all of the stakeholders in mind. That being said, I respect the Board’s decision.  I am fortunate to serve with such a talented group of people. We usually come to consensus, but every now and then we agree to disagree. The reason we don’t always think alike is because we think. That is a good thing. As always, we will move forward to budget season working as Teammates.”

Any time the first selectman receives a salary increase it takes effect on Dec. 1 of a given year, because that’s when his term of office always begins. The last time Brennan’s pay was raised was Dec. 2012, when he received a 2.5-percent increase then as well. In Dec. 2011 he received a 2.3-percent raise. This followed a wage freeze in 2010.

According to Second Selectman Clark, who voted to increase Brennan’s salary this year, “a 2.5-percent increase is what all other town employees basically received last July or as their Labor contracts were approved. That will bring Wilton’s First Selectman to $132,750. He gets healthcare but no other benefits. No town provided car, no free gas, no retirement benefit, nothing. Unlike many neighboring towns who have a town manager, Wilton’s First Selectman is not just Chairman of the Board but also the Town’s CEO and assumes all the work done by a town manager plus.”

He added, “In my view we pay inadequately and are asking our First Selectmen to subsidize the Town. Only people who are independently wealthy, or are supported by a spouse, can afford to live in Wilton and be First Selectman. So it precludes most younger people raising a family (40-60) from ever running. 30 years ago the First Selectman’s job was much simpler. Now it is a 60-hour-per-week grind. Wilton needs to grow up and pay appropriately for what we ask our First Selectmen to do.”

The office of First Selectman is the only paid elected position in Wilton; all other board and commission members serve voluntarily.

Selectman Saxe emailed his comments: “I believe, and the majority of my BOS colleagues, that Bill Brennan had an excellent performance record for the last fiscal year and deserves a pay increase that is inline with other Town employees.Bill is very dedicated to his job as First Selectman of Wilton and works endless hours to make our Town a better place to live and work.”

Hoffstatter added in his statement, “Looking at the concept of public service, most elected officials, whether they are State Representatives, State Senators, Congressman, Senators, or Governors, do not receive compensation any where [sic] near comparable to what they would receive in the private sector given their skill set.  Regardless of political party, most people run for these elected positions because they are passionate about serving their communities.  It is difficult to put a ‘fair’ price tag on that service.”