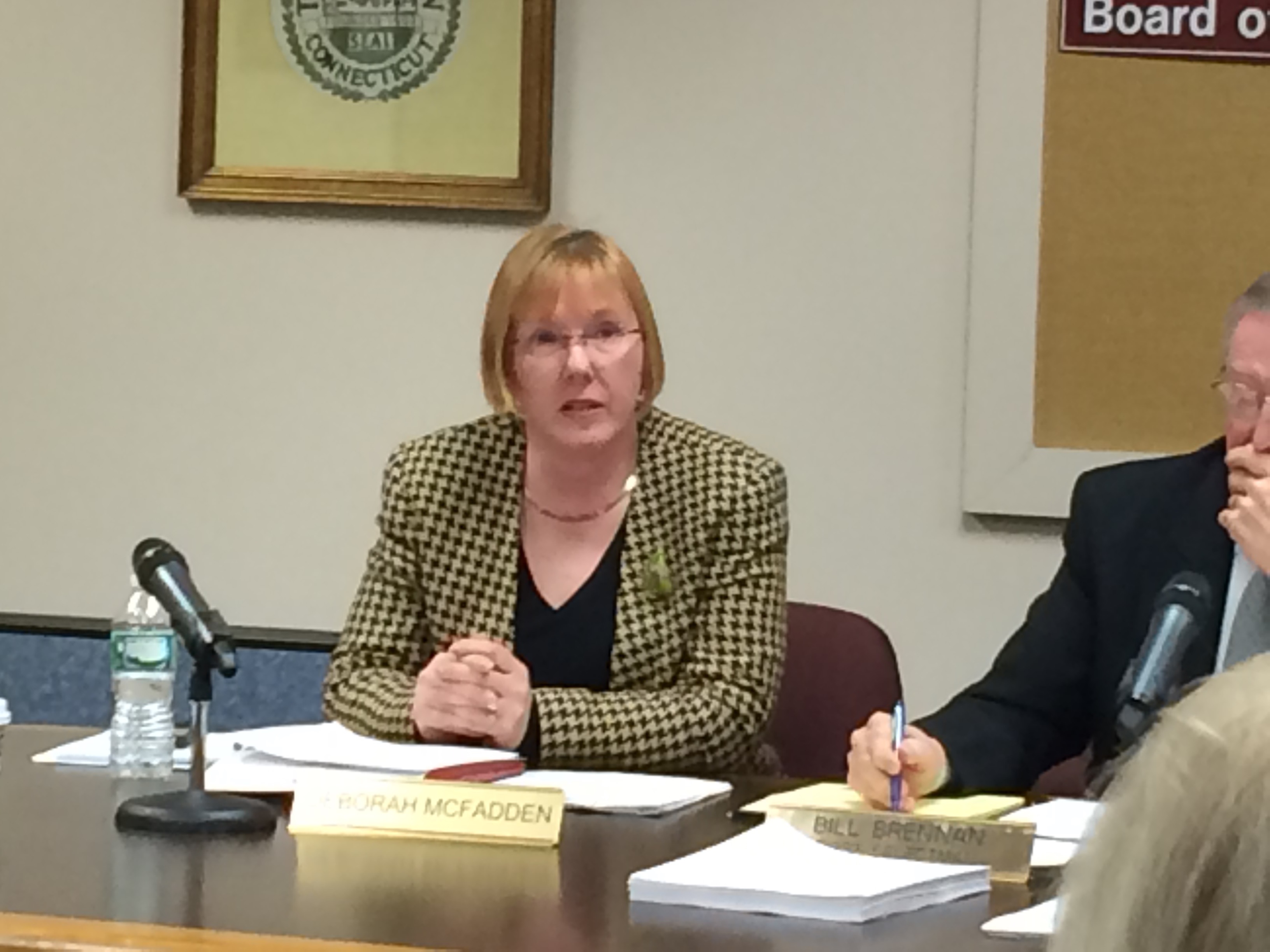 BREAKING NEWS,  June 29, 2015—At a press event on the front steps of Town Hall this morning, Deborah McFadden announced she is running for the position of Wilton’s first selectman. The position, which carries a 4-year term, will be filled by voters at the next municipal election on Nov. 3.

McFadden is currently a member of the Board of Selectmen. She was appointed to fill the seat in January  when Ted Hoffstatter resigned from the BoS. That term is up this November.

She has not yet won the DTC’s nomination to run as their official first selectman candidate, as the Wilton Dems won’t select their endorsed nominee until they caucus in late July.

McFadden says she plans on doing a “listening tour” to find out what issues are of concern to Wilton residents, but she also has her eye on what she says are pressing needs.

“I certainly would like to maintain a proper balance between Wilton’s past history and values, and the need for further economic development–let me be crystal clear:  economic development is a very high priority for me,” she says, also listing the needs of Wilton seniors, citizen engagement and the Danbury train line are areas on which she wants to focus.

Wilton’s current first selectman is Bill Brennan, who has served four terms in the top spot. He has previously said that he will not run for re-election. The Wilton Republican Town Committee (RTC) has not yet announced a nominee, nor have any other candidates from either party announced plans to run.

As a Democrat, McFadden is undaunted by the town trend toward favoring Republican candidates.

“It’s about voting for the person they believe will do the best job for Wilton. It’s not about parties. The largest group in town is not Republicans–it’s unaffiliated [voters]. I’ll use my affiliation to better connect with state leadership. Let’s make this about issues and performance, not about party politics,” she says.

Assuming the RTC will nominate a candidate, the Nov. election will mark the first time in 10 years that Wilton has seen a competitive race to be Wilton’s top official. McFadden says she can’t wait to see who she’ll be running against.

“We’ve had years where, if there wasn’t something on the ballot like liquor stores or beer in the supermarket, people haven’t had anything to vote for. Historically, the last couple of elections, the Republican nominating committee has selected their candidate, who then goes to the RTC, and that’s the process–you have a group of seven people in a closed room picking who we have as our first selectman. I’m excited to be part of a process where the citizens are actually going to get a choice.

According to the Town Charter, McFadden cannot run for one of the other four seats on the BoS and run for first selectman at the same time. There’s no word yet on who the DTC will endorse to run for that spot.

The first selectman is the only member of the BoS who receives a salary from the town.

McFadden and her husband, Jack, have lived in Wilton for 18 years. Their four children have all attended Wilton Public Schools. Andrew and Rebecca graduated from Wilton High School, where their youngest son, Joey, is currently a student. Their daughter, Melissa, passed away from leukemia in 1999.