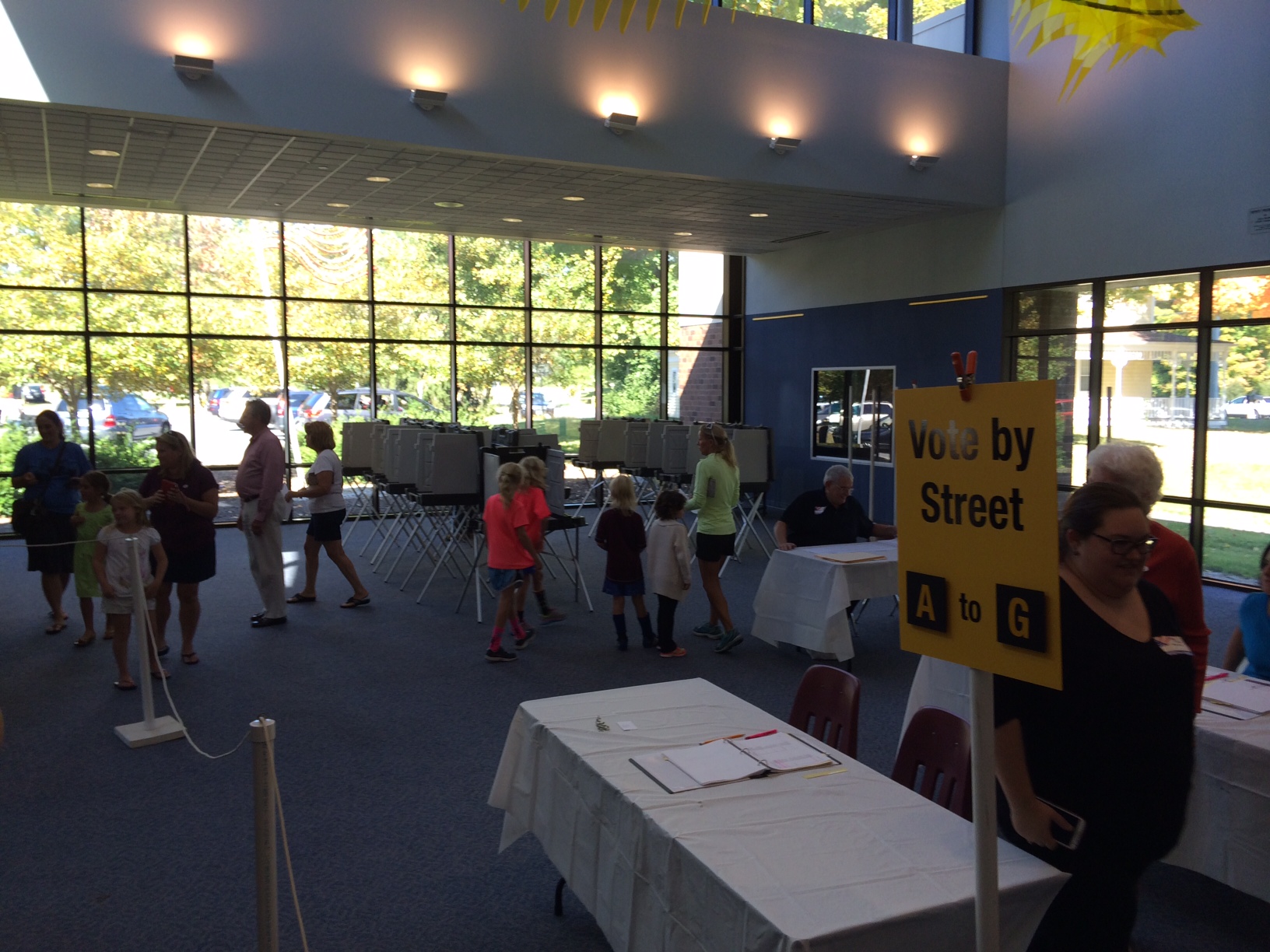 UPDATED 8:30 p.m.–the article has been updated with quotes from both Bruce Hampson, chair of the Miller-Driscoll Building Committee, and Edward Papp, of “Sensible Wilton.”

Sept. 27, 6:05 p.m.–With 1,931 votes cast, Wilton voters have approved the $50 million bonding for the proposed renovation of Miller-Driscoll School. Registrars announced the results at just a few minutes after Clune Center polls closed at 6 p.m., confirming that 979 people voted ‘yes,’ and 952 voted ‘no.’

First selectman Bill Brennan championed this project, most especially in the two weeks leading up to the vote. He was pleased the vote passed, saying, “The winners of this vote are the young children of Wilton and future students of a renovated and modernized Miller-Driscoll school.”

Karen Birck, co-chair of the Miller-Driscoll Building committee, was at the Clune Center to hear the results announced. “I’m pleased that it passed, because much needed work on the school will not be further delayed,” she said, adding that she was not surprised at how close the results were.

Her co-chair, Bruce Hampson, was similarly grateful about the outcome. “This a victory for the Students of Miller Driscoll who, for the first step into their educational journey will have a learning environment that they deserve. I also want to thank all those who worked so unselfishly to make this happen.”

Susan Price, president of the Miller-Droscoll PTA gave a pretty relieved sigh at the vote’s outcome. “Thank gosh!” She added that she knew it would be close — “but not within just a few votes.”

Two Board of Education members were also there to hear the results. “I’m pleased it passed, it is desperately needed,” said BoE member Glenn Hemmerle. “But we’re going to try to figure out what message that sends, that the town was so split.”

BoE member Laura Schwemm was also pleased about the vote outcome. “Now we can move forward, and most importantly the children of Wilton, and the future children of Wilton will benefit. It’s going to be a great school–it’s a good plan.”

There was organized opposition to the project that campaigned vociferously in the weeks leading up to the vote. A group calling itself “Sensible Wilton” published fliers and sent emails urging residents to vote against the project. Their materials said that, “The $50M proposal delays repairs 3+ years and fails to consider alternatives that can improve the school now.”

Edward Papp, one of the leaders of the “Sensible Wilton” group, emailed a statement to GMW.com following the vote.

“Fiscally conservative voters are obviously disappointed with the results. I wish we had been able to reach out and persuade 14 voters to  change their minds based on the information we collected. But I guess it’s always easier to vote to spend the other guy’s money. I would expect town officials to scale back the extent of the expenditure to more reasonable levels as a way of acknowledging the concerns of 49-percent of the voters. I would also hope they seriously consider these all-too-close results when they begin preparing the budget and that they honor their promise to not embark on large capital plans until [the] M-D tear down-rebuild is complete. Clearly, this is one of the closest votes in Town history despite the unanimous BOE, BOS, BOF vote. Let’s hope they get back in touch with nearly half the voters.

“I also urge the town to sell naming rights to new classrooms, cafeterias, etc. to help defray costs. This would be a great opportunity for advocates to demonstrate their commitment outside the polling booth.

“I am of course delighted we had such a large turnout in an off-cycle referendum and I thank all those citizens who worked hard to collect and distribute opposing information since the first public presentation at the library a few weeks ago.

“We will be better prepared to lobby for fiscal conservatism next time.”

A steady stream of voters came to the Clune Center Auditorium all day to cast their ballots, according to democratic registrar Carole Young-Kleinfeld. In addition to voting that followed Tuesday evening’s Special Town Meeting, the polls were open today from 9 a.m. to 6 p.m., with several voters arriving at the last possible minute.

“We were up at Williams College watching our daughter in a track meet, and we had to leave early to make sure we got here in time,” said Carolyn Field, who arrived at the Clune Center with her husband at 5:40 p.m.

The total number of votes included absentee ballots. “We run that through the machine, so it’s part of the total,” Young-Kleinfeld confirmed.

With such a close difference between the ‘yes’ and ‘no’ votes, the question remained about what would require a recount. “It is subject to state laws that govern recanvas or recount provisions,” Young-Kleinfeld. “In a referendum, if the difference between a yes-and-no vote is less than half-a-percent of all votes cast for the question, there would be an automatic recanvas or recount.”

In such a case, every ballot would be examined by hand to make sure that it could be machine-read properly. “We would either count them by hand if they were problematic ballots or put them through the machine again,” Young-Kleinfeld said.

With 1,931 votes cast, a half-percent of that number is 9.7 votes. The difference between yes and no votes was 27, and according to the registrars, that means no recount is needed.

Knowing in advance how close the vote would likely be, registrars made sure to have a backup machine just in case something malfunctioned with the voting machine they used. They also anticipated a larger than usual turnout and had printed extra copies of the ballot to make sure they didn’t run out.

Registrar Tina Gardner said the votes will be posted on the Town of Wilton website as soon as the town’s webmaster is able to upload them, and that the vote would be certified on Monday morning by the Town Clerk.