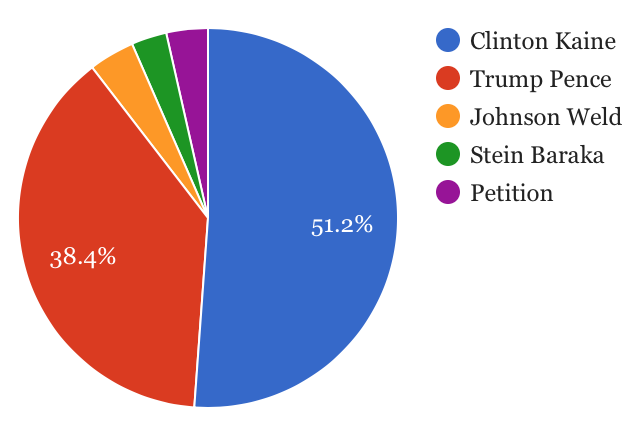 While the nation’s tumultuous campaign season won’t be over for another eight days, Wilton High School students have already decided who they’d elect, after holding a mock election last week. On Friday, Oct. 28, more than 600 students from all four classes cast their ballots in a simulation of the three upcoming national races, and results were announced Monday, Oct. 31, with Democrats sweeping all three offices–President, Senator and U.S. Representative.

The event was coordinated by the Wilton High School Model Congress, a club that grants students a powerful outlet for political expression and debate. Under the guidance of advisor, Kenneth Dunaj, the club conducted the day-long balloting and reported a steady flow of students throughout the day at the WHS polls. Only students were allowed to vote, and more than 45-percent of the school population cast a ballot to exercise that right.

Wilton registrars of voters allowed the Model Congress to use their official privacy booths and ballots in an effort to maximize the authenticity of the election simulation. After being counted by the Model Congress, the results were clear: In both previous Wilton High School mock elections (2004 and 2008), students’ decisions matched the eventual outcomes of the races; in just just a few days, it will be determined whether WHS continues this predictive streak.

The Model Congress students have provided a Google doc with a more detailed look at the results.