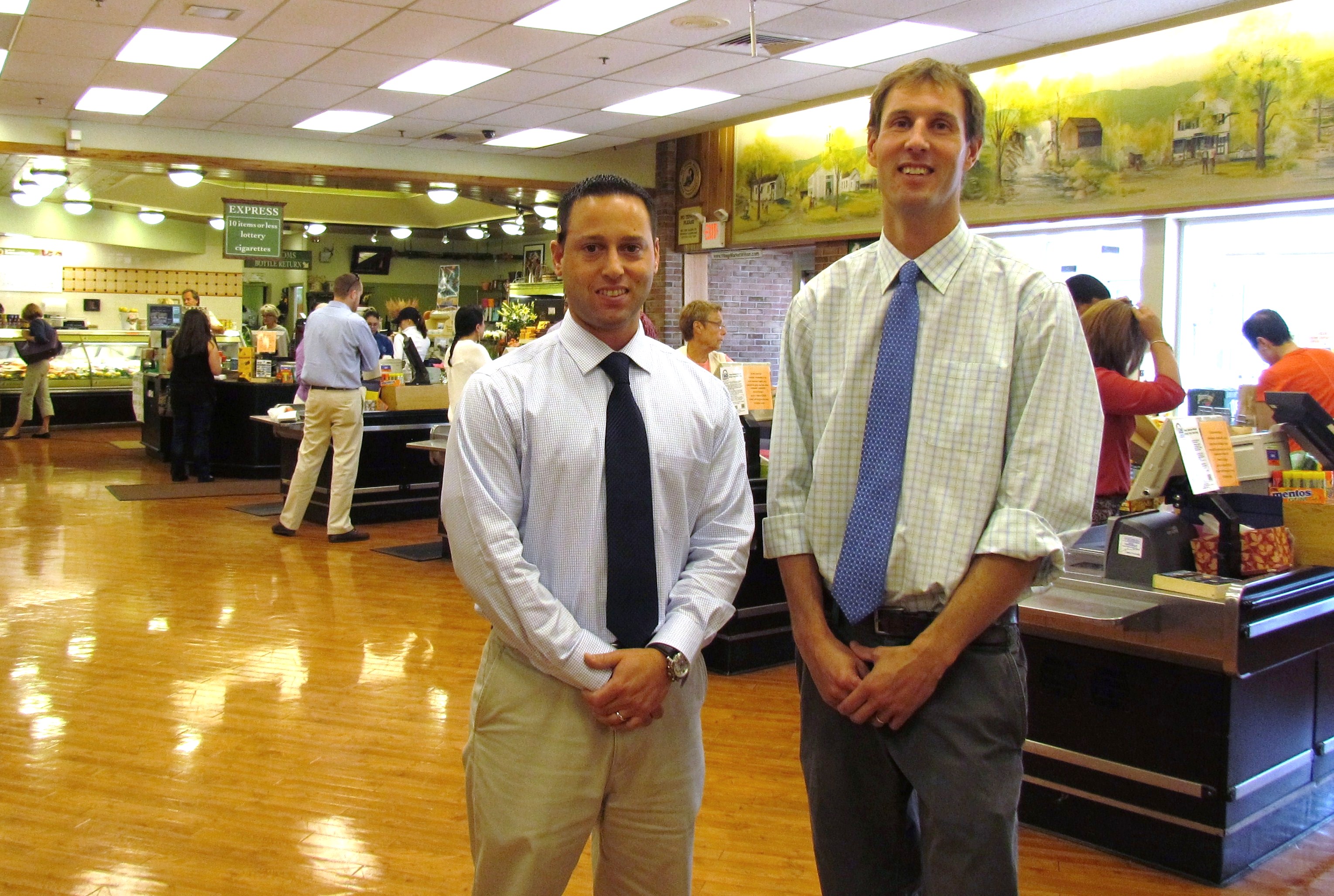 Wilton’s Village Market, Inc., a town institution since 1935, just changed hands, as the market’s president, Peter Keating–and only the 2nd owner in the store’s history–announced Tuesday that he sold the seventy-eight year-old independent supermarket business to two of the store’s longtime employees.

Michael Picheco (left in photo above), the store’s grocery/frozen foods/dairy manager and Timothy Dolnier (right in photo), the store’s deli/prepared foods manager have taken over as owners of the market in a deal that was finalized this week. Picheco and Dolnier will serve as co-presidents, and plan to keep the current management team and structure in place.

“We’re very excited, it’s been a long time in the making. It’s great for everyone, from us, the staff and the community that we’ve been able to make this transition in a way that will carry on the Village Market legacy, bringing us from our 78th year to hopefully our 100th birthday down the road,” said Dolnier. “It’s a great opportunity for us and we’re excited to keep engaging the community and be part of it.”

Keeping the management team in place includes making sure that vice president and general manager Nancy Dolnier, who has been with the store for 30 years, also stays at the management helm. That’s a good thing, considering she is also Tim Dolnier’s mother.

“I’m very excited. I’m thrilled that it’s my son and Mike, who are great young men and will do wonderful things for the business. They have great vision, they want to keep the store much the same as it is–a community-minded store that people love to shop in. I’m thrilled to be part of it,” said Nancy, adding [and laughing] that she will now have someone to report to.

“I have a great relationship with both of them and they’re both incredible people. I couldn’t be happier that it’s them.”

With the two new owners, it’s somewhat of a family affair; not only is one Nancy’s son, but both of the new owners have been part of the Village Market family a long time. “I’ve been here 15 years. I had always hoped to own the store,” Picheco said. “I love the people, I love the products, I always did dream of having my own store and I’m fortunate to have this one.”

Dolnier, who grew up in Wilton, basically grew up at the store as well. “The Village Market is a part of my entire life. My mom has been here since I was born, I’ve been working here through high school, through college, since college, in various roles,” he said. “It makes it extra special that it’s the store where I grew up, not just anywhere. I’ve got great relationships with customers–friends from high school, parents of friends from high school, teammates, people I’ve known all along the way. It’s very special to be part of the Village Market and of Wilton.”

Keating announced the sale and his resignation as President of the company to the store’s staff today by way of a letter to the employees and with a series of follow-up meetings in the store.

Keating began working for Village Market’s founding family, the Piersalls in 1975 and purchased the business from them in 1989. The full-service, independent supermarket now employs one hundred staff members, including over 40 full-time positions.