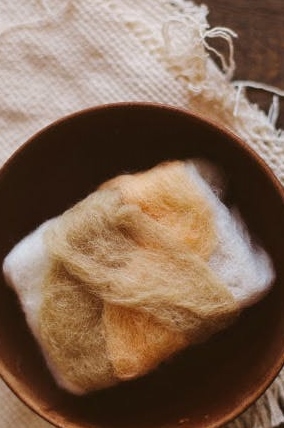 One of the world’s oldest textiles, felt is created from wool or other animal fibers that are densely matted together. It is ideal for protecting against cold and insulating against heat, thus it has long been used for hats, mittens, blankets, rugs, yurts, boots and clothing. At this Wilton Historical Society workshop, museum educator Laurie Walker will discuss the origins of felting, and lead the children in making felted soap. The kids will help make their own snack, chocolate covered pretzels.

According to ConnecticutHistory.org, a program of CT Humanities:

“The origins of Danbury’s hat-making industry date back to the late 18th century. It was then that Zadoc Benedict, having stumbled upon a way to make felt by adding heat, moisture, and pressure to animal pelts, began using his bedpost to mold felt into hats. He then hired a journeyman and two hat-making apprentices and started producing three hats per day. Danbury proved an ideal location for hat making thanks to its abundant populations of beavers and rabbits for pelts and thickly wooded forests for firewood. . . . In the early 1800s, Danbury produced mostly unfinished hats. Hatters softened and dyed the felt through an 18- to 20-hour boiling process, and molded the pieces into their proper shape. They then rolled the hats up by twos into paper and placed them in a linen bag, and from there, into a leather sack for shipment to New York by coach. Once in New York, craftsmen trimmed and finished the hats.”

The expression “as mad as a hatter” is believed to have its origins in the deleterious effects of mercury nitrate exposure on workers in hat factories. During the mid-19th century, the term “hatter’s shakes” became commonplace in the United States and Europe. It referred to the tremors experienced by workers whose prolonged exposure to the toxic mercury used in making headwear had devastating effects. In Connecticut, the physical condition was termed the “Danbury Shakes.”