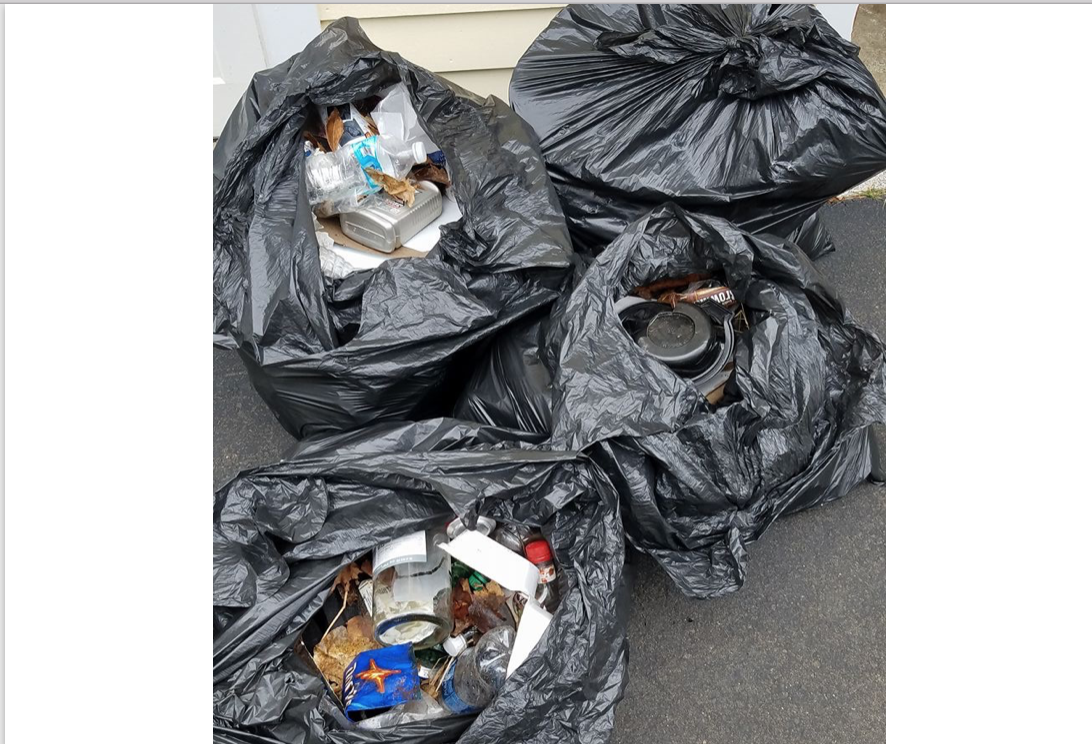 Who knew that a post about garbage on Facebook could be so popular–and have the potential to maybe even help home values?

But that’s exactly what happened this week, when this post (below) and photo (above) of four full garbage bags uploaded to the Wilton 411 Facebook page received almost 300 likes and close to 100 comments:

Town of Wilton, I have your garbage. About 100 gallons worth that my kids and I picked up off the lower Nod Hill Road in just one hour, and we had cleaned the same stretch just 6 months ago. This post is not judgmental or holier than anyone but here’s some reasons to care. Your home value is directly tied to the appearance of your community and property especially with respect to litter. I can send you several studies if you don’t believe that. Second, as Wiltonians, I know most of us care about the environment and our water quality. Most of this garbage was collected in the drainage to SNEW reservoirs. Maybe not the water you drink at home, but if you office in Norwalk you do drink it. Some ideas based on the patterns I see in the garbage – I’ve collected a lot lately. Tell your near drinking age teenagers that you’d rather they threw out their beer, liquor, mouthwash and dip cans at home than worry about getting caught. (you know they do it already). Tell your workers that you are happy to take their trash and make receptacles available for them. Given the high quality of our tap water, consider terminating your bottled water habit. And if you don’t want your paper copy of the villager/hour that has recently been laid at all our driveways, call the paper and tell them rather than ignore the fact they are stacking up on the road. PEACE TO ALL, NEIGHBORS AND FRIENDS!

The post was written by Wilton resident John Kelly, and like he mentioned in his post, he’s no stranger to the volunteer trash collector effort. Not only has he pitched in this way the two times he describes above, he’s actually voluntarily picked up roadside garbage around town a total of six times in the 18 months since moving to Wilton from California.

“It’s my town. I’m a fully invested share-holder, so to speak. I sure would like it to be clean, it bothers me.”

Kelly wasn’t trying to be preachy or lecture his fellow residents about stepping up and taking some responsibility in his post.

“I know how that could backfire on social media, so I was super careful at wording that. I’m not trying to judge anyone or say, ‘This person is doing more of it and you all ought to get out here and clean up too.’ I was just trying to generate more awareness and say that it doesn’t take too much effort. Although there’s a heck of a lot of garbage out there, you can create a lot of impact,” he says, adding it’s even a great family activity. “You can do it with your kids–if anyone is concerned about their kids being too entitled, it’s a great way to lead by example and get into ways of fixing the town in ways that are small but impactful.”

Kelly was surprised that there was so much trash that had amassed on the mile-long stretch of Nod Hill since he last collected about 6-months prior–but he also was struck by the type of garbage that littered the roadway, and what it indicates.

“To have 100 gallons of trash! You see a lot of patterns when there’s that much. A lot of the trash is dip cans, cheap beer and high volumes of beer and wine containers, and easily hidden liquor containers, like flask bottles. Plastic bags of a number of beer cans–including ones that have been opened in the shotgun method. And mouthwash. So, that’s one part of the garbage, coming from kids who don’t want to get caught drinking,” he surmises.

Other motorists who are likely tossing things out the car window are probably just passing through, tossing coffee cups and fast food trash, and losing lottery tickets, saying, “‘This isn’t even my neighborhood, I don’t give a damn,’ and out it goes,” Kelly says, adding that it’s likely not to be ‘accidental’ garbage, or something that happens to fall out of a pickup truck.

Another alarming factor is that particular area is a water drainage area. “All that stuff is going into the water supply.”

And until someone stops to point it out, it’s understandable that not everyone will take note of the litter sprinkled along the sides of Wilton’s windy roads. As we go about our day, it sort of blends into the scenery as we drive by it, perhaps even especially so in the grey of winter. Sometimes we need the reminder to slow down to notice our surroundings and make the time–and relatively easy effort–to each do our part.

It’s that action that Kelly says is worth putting effort into over, say, griping about it online.

“Complaining about it isn’t going to get a damn thing done. You’ve gotta do something about it, and in this dimension it’s super easy to do so. You get a little exercise, maybe teach a little civic lesson to your kids, it’s win-win-win.”

Kelly’s own personal civic-minded duty got him involved early. After the first time he stopped to do some local road cleanup, he got in touch with first selectman Lynne Vanderslice. She recruited him to become a member of the Wilton Economic Development Commission (EDC).

That role has underscored what’s at stake for the town, and it has made the issue stand out even more for Kelly.

“If you’re not into it for saving the environment, or because you don’t like your road to look uncared for, I bet a large majority of Wiltonians care about their home values. There’s proven linkage to litter on the property and decline in home values,” he says, driving home an issue that resonates for so many residents.

He also keeps in mind the work that the EDC is trying to accomplish.

“We’re talking about branding the town, and the towns are competing for new residents and taxpayers. They create a first impression–this place looks pretty nice, it’s a great balance of rural and access. That first impression can be the difference between buying in Wilton versus buying New Canaan, Westport, Weston or other towns. There are so few homes bought and sold in Wilton–just under 300 a year. Just a handful, 30 homes can make a 10-percent swing! That 10-percent increase would be bonanza market, so just wanting to defend your home value, this really does help,” Kelly says.

Kelly has some ideas, like more frequent town-wide cleanups. The Wilton Conservation Commission holds a cleanup each spring, but Kelly thinks more residents, groups, businesses and organizations should be recruited to pitch in, and more frequently. Some other thoughts include branded bags and incentives for private haulers to take part.

But he’s also buoyed by the response to his post on Facebook, including several of his fellow Wilton neighbors who said they were doing the same thing regularly on their own streets. There was even mention of another Wilton woman who picks up litter regularly by Orem’s Diner but who doesn’t have regular trash pickup at her home–so several of the commenters volunteered to help her by taking the bags that she collects.

His one post ignited something in people who were either primed for his message or were previously unaware–but glad to get the wake-up call.

A few days after his original post resonated with folks, Kelly updated it with this commentary:

“Clearly, this post struck a nerve. My takeaways.  1. General agreement that there is a litter problem on the streets of Wilton.  2. A good number of people who are taking it upon themselves to do something about it outside of the annual spring cleanup effort.  3. An even greater number of people who want to do more and we can multiply our impact by helping each other out (love hearing about the Orem’s lady!!!).  4. Some hope that the town may support/complement our individual efforts.

My suggestion, and there are no easy answers according to studies produced by organizations like KAB (Keep America Beautiful) is to leverage this W411 page to form neighbor teams who will take turns cleaning up their particular neighborhood streets – some get hit a lot harder than others. That, and again, making your high schoolers aware of the issue, both on the cleanup help and the need to keep it clean. Like others have mentioned here, I will raise it with the town as well and see what is possible through public/private partnership. Check back here for progress!”