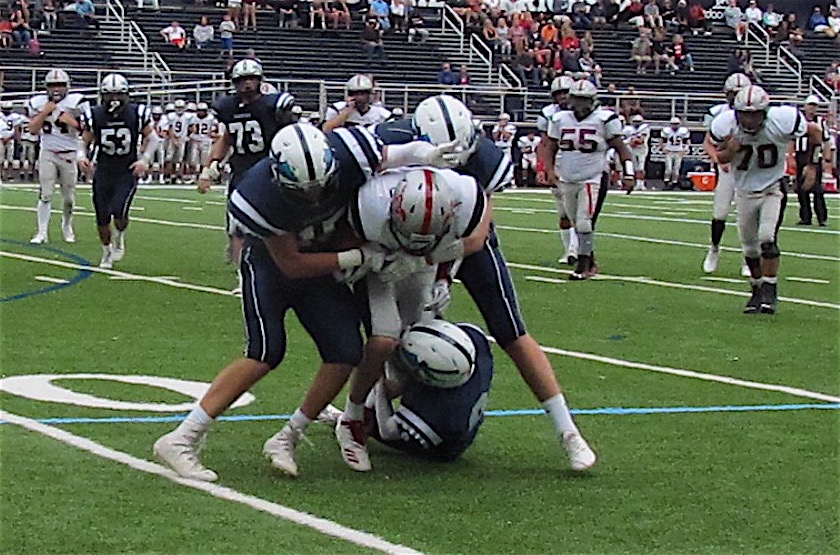 The Wilton School District’s intense revision of day-to-day activities to fit the new COVID normal has consumed town dialogue, but what happens after school’s out?

High school fall sports are an integral town activity for players and spectators alike, with over 60% of the Wilton High School student body participating as athletes each year, but what the new season will look like is still relatively up in the air. The state is expected to make a formal decision about the season next week, but The Day of New London reported that Connecticut Interscholastic Athletic Conference (CIAC) officials predict the state will push back the start time of games and have a shorter season. Instead of state tournaments, competitions would likely be localized to certain regions and not begin until later on in the fall.

Wilton High School’s athletic director Chris McDougal takes a more optimistic stance, thinking that sports will be allowed to start as scheduled with football conditioning beginning Aug. 17 and other sports starting Aug. 27. However, he agrees that the CIAC will likely change and shorten the existing game schedules of school sports.

“Everything is always in a state of perpetual evaluation,” McDougal said. “And so the CIAC says that they’re going to make a statement [soon] to find out what this upcoming season is going to entail and then from that statement, the league–ours is the FCIAC–will make some changes to our current schedules. They will not be the same.”

McDougal described the situation as “fluid,” and subject to change as COVID case data and community transmission rates do.

“Bottom line is how to keep everybody safe for players, coaches, and fans,” he said.

For Wilton, McDougal said if students are in school in-person–either in a hybrid or full reopen model–the high school plans to have sports. If the school is learning remotely, they won’t be able to.

McDougal is required to submit plans for each sport to the town’s health director, Barry Bogle, who must approve each plan. A plan is necessary for each sport because sports differ in risk and challenges.

Each team’s plan will detail cleaning protocols, safety measures, and how it will ensure the health of its players. Whether the plan involves temperature checks, self-symptom checks, or other measures is still up in the air.

However, unlike during the school day, many mitigation strategies like masks, cohorting, and social distancing aren’t always possible when sports are actively in session.

For football, instead of restricting teams to a smaller number of people, they plan to instead cohort players during practices into groups of 10-15 players at a time depending on the regulations, where coaches would switch from cohort-to-cohort. This would make contact tracing easier if a COVID case did present itself, though McDougal said it would be a decision for the head coach to make.

“It’s up to the head coach. They have to feel comfortable with the size of their team, they have to be able to manage their team and follow all the protocols that we’re going to set forth related to COVID,” he explained.

However, during practice, players will distance “within reason,” while still practicing “the game way the game is supposed to be played.”

As games or matches are being played, they’ll look relatively the same as before COVID. Players will not have to wear masks when actively exercising, such as during practices or games, but when they’re on sidelines or the bench and not playing they will “more than likely have to wear masks” and social distance. McDougal said where this becomes a challenge is in football, where all side-lined players are required to stay in the center of the field between the 25-yard lines, and there likely isn’t enough space to maintain six feet of distance between each player. McDougal also added that they may need to make sure an adult is in charge of monitoring players during breaks to make sure they aren’t having difficulty breathing with their masks on.

At games, some activities that come second nature to players will become obsolete. For instance, McDougal said the traditional end-of-game shaking hands and high fives between teams won’t be able to happen, and teammates will have to bring their own water as teams will forgo the community water cooler. Locker rooms are also up in the air–officials have said they can’t be used during the day, but because players need to be able to change into uniforms after school, McDougal is not sure if they will be available for athletes.

Moreover, because of the necessity to social distance, the school may have to use twice as many buses to transport players to away games to make that possible, which would be an additional expense. However, one option the FCIAC is discussing is scheduling games only weekends, “jamboree style,” which could help make sending multiple buses more financially affordable.

McDougal said some decisions, such as whether or not to open seating for spectators, will be collaborative between himself, the coaches, the Board of Education and Bogle. He believes that Darien has decided not to allow fans at athletic events.

Despite these concerns, Connecticut has been allowing summer sports with relative success since Phase 2 started. The regulations for these sports to run are extensive and differ based on whether sports are categorized as High Risk, Moderate Risk, or Low Risk. However, new cases in mid-July were linked to youth team sports, suggesting they are not totally risk-free.

New Jersey and New York have both pushed back the start date of scholastic sports to October and mid-September, respectively. Connecticut is expected to make an announcement on Aug. 3, if not sooner.

Alhough Connecticut’s case numbers remain low, the recent upticks that have occurred are largely attributed to young people. In fact, McDougal said that even with all of the uncertainties of the specifics of how fall will look, his biggest worry is of players not following social distancing guidelines outside of school and sports, especially in light of National news that at least 17 team members from the Miami Marlins tested positive for the virus less than a week after Major League Baseball, a multi-billion dollar organization that tests players multiple times a week, opened the season.

“I’m absolutely worried because once they leave our area–the school grounds–I don’t know what they’re doing outside,” McDougal said. “I can control what they’re doing here, along with the help of the coaches and the athletic trainers and everybody, but once they leave–and I think that’s what happened to baseball, once they left the park, and they went out into town and they did whatever–I think that’s where they’re getting sick and bringing it back to the team.”

For now, he encourages people to follow the protocols, wash hands, wear masks, and be willing to say ‘No’ to anything unsafe.

In terms of McDougal’s faith in the state, league, and district’s ability to keep kids safe in school, he’s confident they are doing the best they can, but he knows there is always a risk.