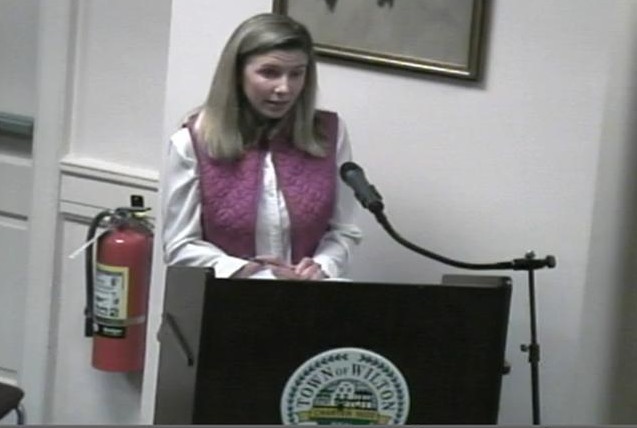 The CT Freedom of Information Commission (FOIC) issued decisions on Wednesday, June 10, on three complaints filed by Marissa Lowthert against the town of Wilton and officials from the Board of Finance, the Board of Education and the Miller-Driscoll Building Committee.

“She has filed multiple complaints last year. Three were adjudicated yesterday,” CT FOI public information officer Thomas Hennick said in a phone call with GMW.com on Thursday afternoon. “Two were dismissed and one was found to be in her favor.”

While these are the three most recent complaints for which decisions have been released, they are just three of many other complaints filed by Lowthert against Wilton and various town officials and boards, which the commission has received and adjudicated. Some have been decided in Lowthert’s favor, and some have been decided in favor of the town and town officials. [Editor’s note:  GOOD Morning Wilton is preparing a more detailed look at all the complaints that have been filed with the FOIC, including specific findings and decisions.]

Complaint 1:  Board of Finance

The first of two complaints that were dismissed this week was one Lowthert filed against Warren Serenbetz, chair of the Board of Finance; the Board of Finance; and the town of Wilton (Docket #FIC 2014-497). It was heard as a “contested case” on April 7, 2015. It pertained to records Lowthert had requested from the officials regarding a financial audit that was conducted of the Wilton Public Schools, with regard to the school district’s former facilities director Sean O’Toole.

According to the decision document provided to GMW.com by the FOIC, Lowthert requested in her complaint, “…records without redactions; imposition of a civil penalty of the maximum allowed $1,000…; and admonishment of the chairman for, among other misdeeds, violating the FOI Act.”

The commissioner who acted as hearing officer on this case found that the BoF was justified for not providing Lowthert with the records she requested because the board did not have them. As a result, those named as respondents (Serenbetz, the BoF and the Town) were found not to have violated the FOI Act, and they were not sanctioned with the penalties Lowthert requested. The complaint was dismissed.

The second of the two dismissed complaints was filed against Bruce Hampson, chairman of the Miller-Driscoll Building Committee; and the M-D Building Committee (Docket #FIC 2014-444). It too was heard as a “contested case,” but this time on April 24, 2015.

The decision document states that Lowthert alleged that “on February 11, 2014, the respondents violated the Freedom of Information (“FOI”) Act by conducting committee business and voting by email, and without providing notice to the public. The complainant also requested the imposition of civil penalties, among other remedies.” The decision cites relevant statute section 1-206(b)(1) that “any person …wrongfully denied the right to attend any meeting of a public agency…may appeal… to the FOIC…not later than thirty days after such denial, except in the case of an unnoticed or secret meeting, in which case the appeal shall be filed not later than thirty days after the person filing the appeal receives notice in fact that such meeting was held.”

According to the decision, Lowthert contended that she didn’t find out about the alleged secret meeting until June 2014.

The decision outlines when the M-D Building Committee met, and when they published notices about those meetings. However, it states that the Commission found that Lowthert “…received notice in fact that the respondents may have conducted an unnoticed or secret meeting…” based on minutes and notices made available on the town website and through the first selectman’s office in March and April, and that she filed her appeal more than 30 days after receiving notice, and thus was too late.

As a result, the Commission states in the decision that it did not have jurisdiction and dismissed the complaint.

The complaint that the hearing officer found in Lowthert’s favor was not released by the FOIC spokesman, Hennick, by press time. He did say that it involved “certain records she was looking for from the school district. The hearing officer found that the school district was not diligent enough in its search for the records and ordered them to pay a $300 penalty and to get her the records as quickly as possible.”

Hennick did say that he would provide the decision document to GMW.com as soon as it was available.

Emails were sent to Lowthert, Serenbetz, Hampson, first selectman Bill Brennan, town counsel Kenneth Bernhard, and chair of the Board of Education Bruce Likly. By press time, no one had provided comment.