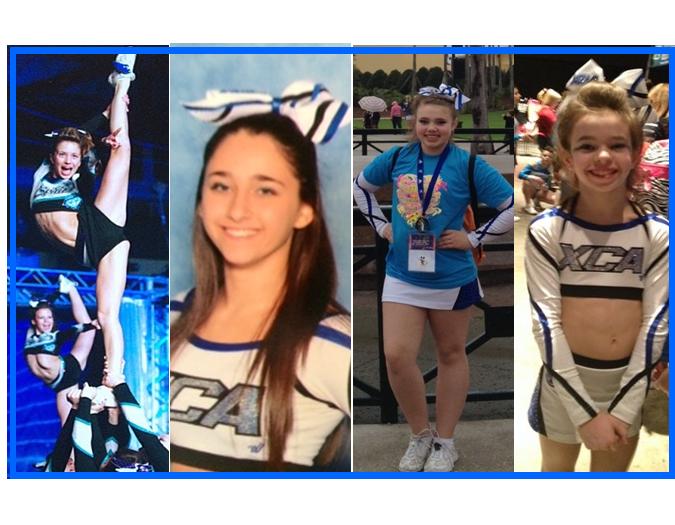 Four Wilton girls who compete as All-Star cheerleading athletes on area teams recently traveled to Orlando, FL in early May to compete at “The Summit,” Varsity All-Star’s most prestigious event of the year.

All four girls took the floor on Saturday, May 3 with their teams in hopes of placing within the top 50-percent of their division, in order to move forward into final round competition the following day.

Reber, Rhodes and their Senior 2 teammates performed a courageous routine with a honorable performance at the end of day one, although they did not advance to final rounds.

However, Meyer, Favarolo and Rhodes all succeeded Saturday with two nearly flawless performances which helped them advance:  Favarola and Rhodes with their teammates on Xtreme Cheer Blaze performed a nearly perfect routine allowing them to move onto finals placing them eighth out of 18 teams; and Meyer with the Spirit Emeralds performed a perfect, zero-deduction routine which tied them for first with the well-known Pacific Coast Magic team from California.

Going into Sunday’s final event, Meyer, Favarolo, Rhodes and their respective teammates were hopeful to perform equal to, or better than, the previous day. Performing live at the HP Field House in Disney’s Wide World of Sports, the athletes took the main stage under the lights and cameras of ESPN 3.

First up was Favarola,  Rhodes and their Blaze teammates from Xtreme Cheer. They performed another fantastic routine, earning them seventh place overall out of 18 teams.

Concluding the day as the last team to perform in the Large Senior Level 3 division, Meyer and her Spirit Emerald teammates performed another zero-deduction routine leaving a very respectable impression on the competition. The Emeralds ended sixth, only missing first place by .6 of a point. The division was so extremely close, ties were determined for both first- and seventh places.