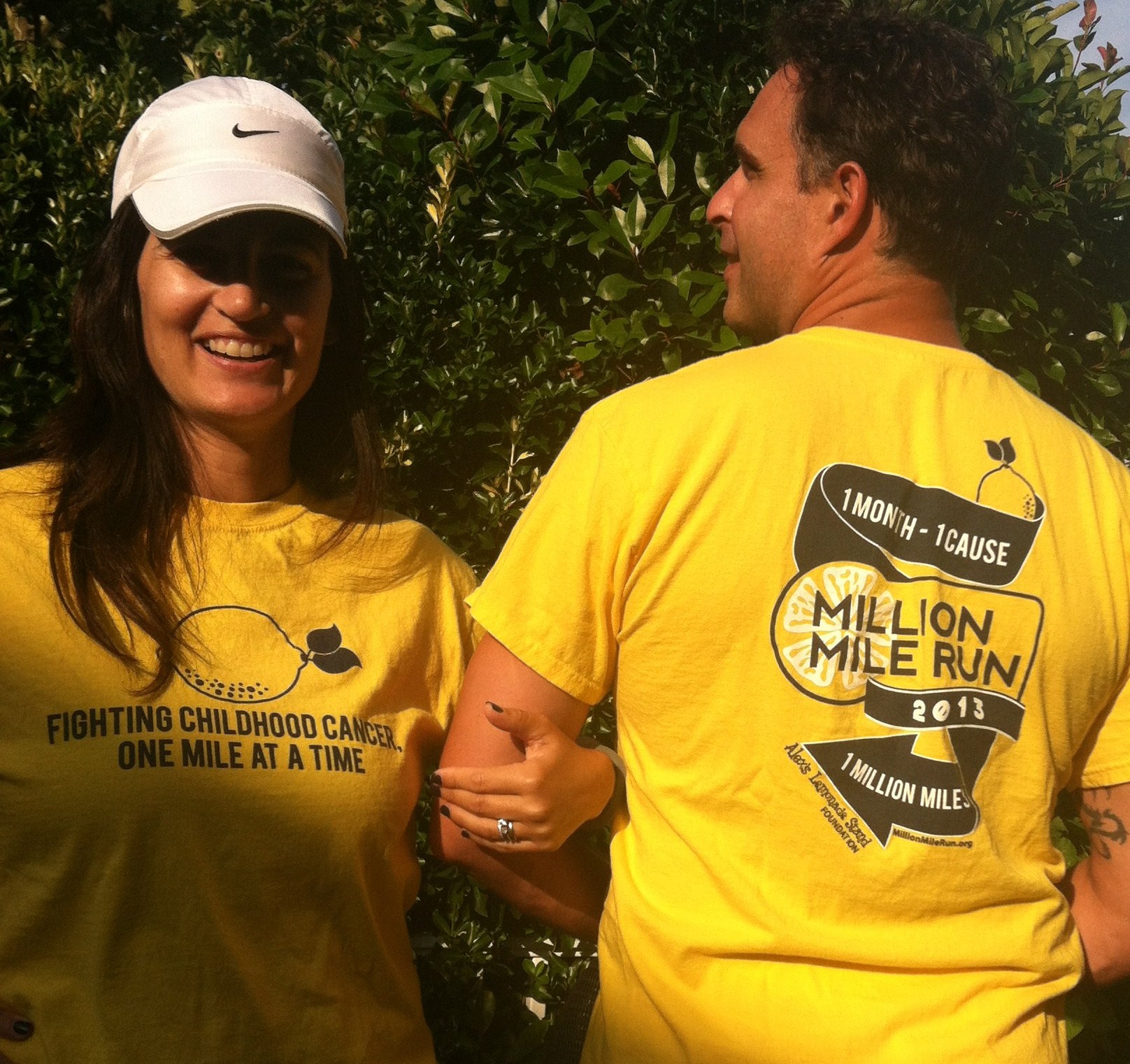 I’ve never been a runner. But when our friend, Jeff Snyder, announced over the summer that he was going to be forming a team for the “Million Mile Run,” without even flinching I said, “That’s it, we’re in.”

I was the kind of runner who could run maybe two blocks before giving up. Call it lazy, call it disinterested, call it undisciplined. It wasn’t something that appealed until Jeff made his Facebook appeal. Come run 100 miles in September to raise money and awareness for Alex’s Lemonade Stand Foundation, which is dedicated to fighting pediatric cancer.

Truth be told, there was no excuse big enough that would have been valid or reasonable to not run on this team. Jeff’s dedication and ability to inspire people to do things bigger than they think they’re able to is clear–that’s how he got almost 100 people to join this team and raise at least $50,000. He doesn’t exactly pressure someone to do something they never thought they could as much as he sweeps you along with his enthusiasm, and you just understand you can and you will.

But in the three whole seconds it took to say, “Yes! I want to be part of this amazing effort!” I realized it was because that’s the kind of spirit you catch when you live in Wilton. People do things for one another, to lift other people’s spirits, and to make a difference in the world. Many of us are aware of the some of the children in town right now fighting, living with and just being children…with cancer. There was no way we could say no.

And so I started running, a little bit more every day. Past the first two blocks, eventually past the first four, and then past the first mile. I eventually ran more than 50 miles (my husband and I split the 100) in the course of four weeks. I discovered that I liked it, and could finally understand what that “runner’s high” meant. I also discovered a sort of embarrassing thing about running, at least about some of the physical aspects of running–let’s just say you have a couple children, it makes you need to know exactly where the nearest bathrooms are, and let’s just hope you reach it in time. But I’ve learned there’s a sisterhood of running women my age who deal with the same thing.

But that’s an infinitesimally minor inconvenience compared to the indignities and agonies so many children fighting cancer face each day with valor and grace. How could all of us not rise to the challenge to help them. How could all of us not put aside our trivialities and give this very small thing to hopefully make a big change happen in their world and in the larger world.

In addition to running on the team with my husband and children, I also wanted this website to be a part of helping the team reach its goals. It was an honor for GOOD Morning Wilton to be part of this movement right from the start. I hope we’ve been able to bring some attention to the amazing phenomenon that are the Wilton Cure-iors, and to know we have contributed something toward making a difference.

I also want to mention the GMW.com advertisers who have helped us be part of this too, just by taking a chance on our website in its first month. We are donating a portion of our ad revenues from the first month, so we say thank you to the following advertisers for helping us.

Thanks to everyone who supported us, the friends and family who ran on the team, who donated, who cheered us on. Thanks to our kids who ran with us, who biked alongside and said, “You can do it!” even when it felt like running another step was impossible.

And thanks to Jeff for asking.