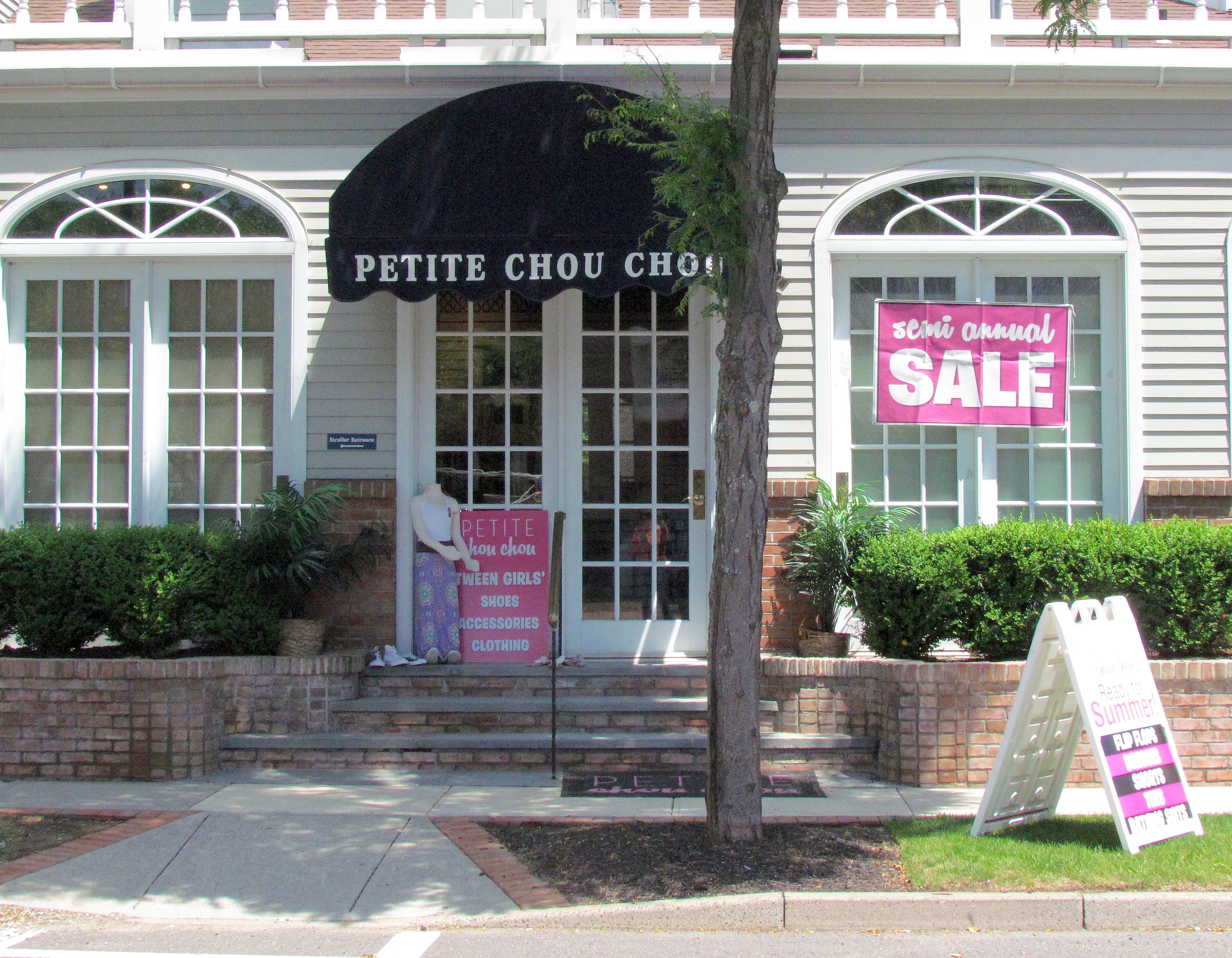 There’s good news and there’s bad news for Petite Chou Chou, the kid- and tween-targeted spin off of Chou Chou, the popular women’s apparel and footwear boutique. While the women’s boutique at 21 River Rd. has been a Wilton Center mainstay for more than 15 years, the kids’ boutique tried to make a go of it across the street after opening in early 2013. But yesterday, June 10, Katie Sanford⎯who owns the stores with her mom, Kathy⎯notified GOOD Morning Wilton of some disappointing news:  “We’ve decided to close Petite Chou Chou, and merge it into the big store.”

Katie is blunt when it comes to identifying what’s behind the closing–it’s the landlord of the space where both stores are located. “Kimco is the main reason,” she says.

But it’s not the only one, she says.

“As of yesterday, kimco was willing to negotiate on rent but not enough to make keeping the space a viable option. At the end of the day they are a big company and we’re just a little cog in their wheel. Also, I would like to emphasize that while the high rent was the biggest factor in deciding to move, the planning and zoning ridiculously strict and arcane signage rules were a major factor as well. When we got good signage (which by the way completely fueled sales) we were sent a cease and desist letter. We just couldn’t win between the town and Kimco,” Katie said..

Several times in the past she’s confided that rents are unfairly high and Kimco has been inflexible, she says, until the Sanfords made good on the decision to close one store. What’s more, she says the landlord hasn’t been responsive to maintenance problems, like leaks. She cited high ancillary fees that Kimco has indiscriminately charged them for⎯things like parking, maintenance and landscaping, adding significantly higher costs to their base rent. And the Petite Chou Chou space wasn’t insulated, which caused their utility costs to skyrocket, all with little consideration from Kimco.

So where’s the good news? Petite Chou Chou isn’t entirely gone. Katie will be sending out a blast email to customers today about starting a sale. They’re drastically cutting back prices at Petit Chou Chou as they prepare to move everything out of the Petite Chou Chou location at 5 River Rd. across from the Wilton Bow Tie Cinemas, and open up a sort of “boutique within a boutique” at Chou Chou.. “Most things will be under $20, and summer sandals are $25. Now is a great time to stock up on summer clothes,” she says.

They’ll be out of the space by June 30, and use the month of July to get set up in their new space. They will also narrow their target audience a bit, and carry mostly items for 8-12 year old girls.

“It’s a space that will be even more fun for moms and daughters to shop together. It’s one-stop shopping,” Katie says of the 10-ft. by 10-ft. area in the main store that they’ll turn over to younger-skewing items. “We are still going to be everything that their daughters love, just in a new space.” In fact, Katie is making sure not to pare down too much, and they’ll keep a lot of the same lines they carried before:  Converse, Tractr Jeans, Hunter Boots, UGGS. “And of course the fuzzy pjs and blankets!” Katie adds.

Of course, the savvy owners that mother-daughter duo are, they know what Wilton will need when they do reopen. “We’re planning a big launch for back to school in August,” she adds, “starting Aug. 1.”

Editor’s note:  the article has been updated to expand on Sanford’s thoughts about what’s behind their need to shutter one location and move into their main store.