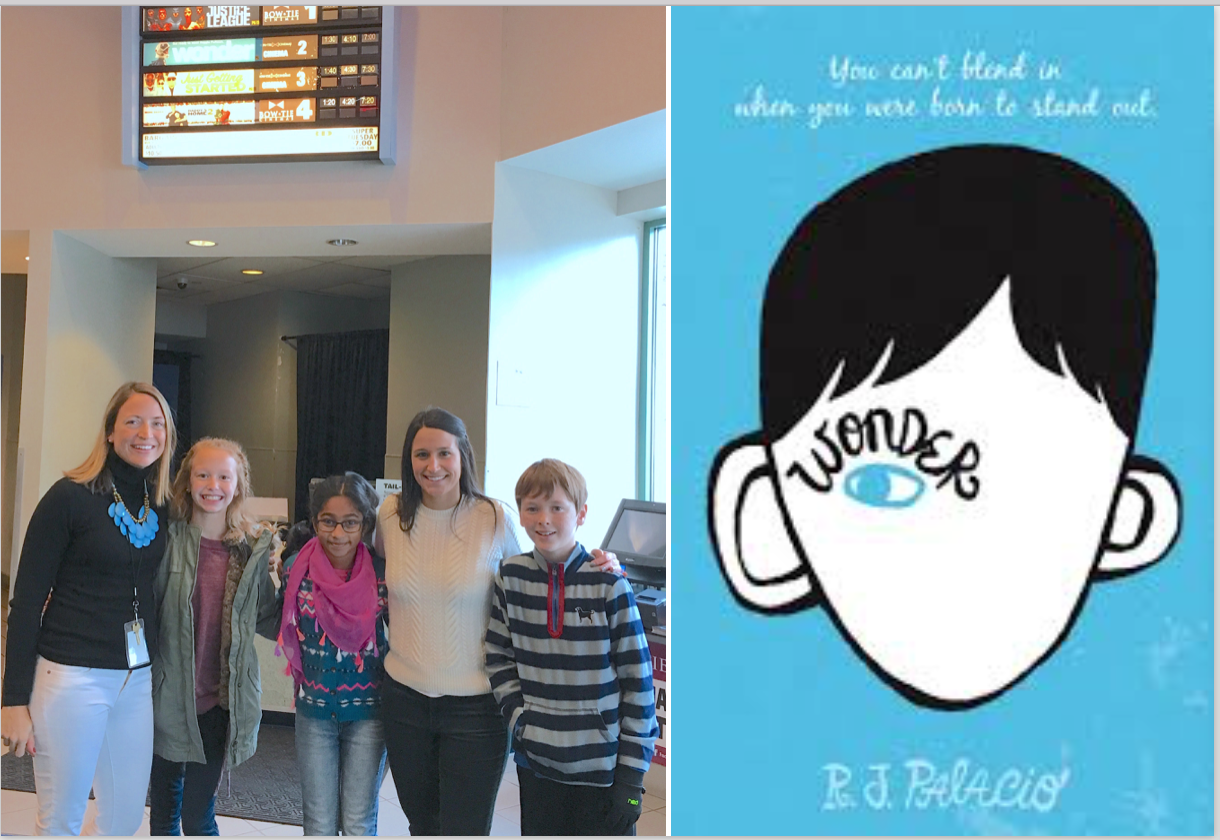 The bestselling book, Wonder, and its recently released movie version, are both tear-jerkers. Both tell the fictional story about an 11-year-old boy named Auggie who has a severe facial deformity, and the experience of his first year going to school with his peers.  It is a moving and emotional tale about acceptance, empathy and kindness, and it shows how true friendship develops around values more important than physical appearance.

Cider Mill fifth grade teachers Ashley Kubo and Katie Froelich were able to weave both the book and movie into a curriculum they created for their students. Shortly before the winter break, all the fifth grade classes took a field trip to see the movie and work on related projects in the classroom. The result, say the two teachers, was nothing short of … wonder-ful.

“It was just something that brought the spirit of the story among the general fifth grade across the building, just really everyone was so excited,” Froelich says.

The real excitement, they agree, was how the students made very personal connections to the subject matter and were able to bring those observations back into the classroom for discussion and learning. What’s more, so many students said the experience has helped them see how they can bring more kindness to Cider Mill.

Many of the children had already read the book, and knowing they would see the movie with their classmates made many others excited to read it as well. It was a good match with the kids the same age and grade as Auggie, so they could relate to what they were seeing on screen. The timing of the movie release was fortuitous too, as the children studied character in the fall.

“It fit with thinking about the journeys that characters go on. We’ve discussed tracking a character through their changes and thinking about what does the book teach us as the reader?” explains Kubo.

The movie helped solidify much of those lessons for the kids, reinforcing how Cider Mill works to teach the kids about empathy and kindness in every grade.

“When we got back from seeing the movie yesterday, we had a class conversation about what really stuck out to them,” Kubo recounts. “I had a student who said, ‘If someone like Auggie came to our school, I think the situation would be different now that we’ve seen this movie and a lot of us have read the book.’ Fifth graders don’t always think that way, but having empathy, it’s starting.”

Froelich agrees. “There are takeaways from the movie and our conversations were very fifth grade friendly in terms of showing somebody how can you use the lessons learned in this movie or in the book with your other peers?”

Both teachers agree that because the students got to see the pain that Auggie feels when he is bullied by Julian, and watch how to stand up for someone like Auggie’s friend, Summer, does, seeing the movie was a great way for their students to learn by example and see other perspectives.

But even better than just hearing that from the teachers, three Cider Mill students explained it very well themselves, sharing their observations and takeaways from both the book and the movie. From what these very articulate 5th graders had to say, it’s clear that the work they were doing in the classroom on this unit had made an incredible impact. (And according to their teachers, the three were very representative of their classmates.)

GMW:  When you guys read the book, what did you take away from it?

Nate Jackson:  It’s don’t judge people by their looks or anything because it’s the purity of the mind, heart, soul, all that. It’s not the outside.

Sienna Morris:  I agree with both of them, especially don’t judge a book by its cover. Everyone in the school judged Auggie, and that kind of almost hurt me, even though I wasn’t even in the book or anything. Because it just shows that how bad people are in the world sometimes. And that needs to change.

Sienna:  I think it will change in a positive way. After seeing Julian, his effect on Auggie, they see how bad it is and they realize they don’t want to be like Julian being mean to Auggie like that. They want to change their attitude and their way of not talking to people, and focus on being nicer.

Nate:  I know there actually has been a reasonable amount of discussions about that. Like a kid in our class, he said, if a kid like Auggie were to come to our school, the effect would be amazing because that movie teaches everyone in the school never to do that.

Saanvi:  Books are good to give you a lesson, but seeing it in [the movie], that it’s real people, that actually have the effect on their face, the disabilities, how if he did come to our school, people would probably be more welcoming than the kids that weren’t in the movie. It really goes to show how you have to be nice.

GMW:  Did this experience of seeing the movie change you in any way?

Saanvi:  It changed me because if one person like Auggie were to come to the school, maybe before I could have avoided it a bit, but maybe I would still be nice. But after watching the movie, it made me think of being nicer about them, and probably talk to them more. And have a good effect on them, than what might have been before I read the book.

Nate:  I think what you’re saying is it doesn’t matter if Auggie was a normal kid or anything. Bullying is not allowed. How Julian kept bullying him, he would’ve bullied him even without his face disabilities. There are two main lessons, never bully and don’t judge a book by its cover, Because if you think about the outer thing is he has a disability, but inner, you think, it could be any kid. Bullying is just not allowed.

Sienna:   Julian never really got to know Auggie, and just thought of how he looked, how he judged Auggie before he got to know him. It did change me  … if I ever see someone getting bullied or anything like that, no matter what it is, that you should really just go and stand up for them.

Froelich and Kubo were quick to acknowledge how supportive the administrators were when they proposed the idea. “[Principal] Jen Mitchell was so for it, immediately. She called [assistant superintendent for curriculum] Chuck Smith, and said, ‘This is a great idea,'” Kubo recalls.

“And Chuck was so excited,” adds Froelich. “Immediately, that night we had an email that said, ‘Absolutely you can go.’ We wouldn’t have been able to do it if they weren’t so supportive. They really saw the spirit and the importance of this activity for everyone.”

One of the related activities the teachers had their students do was to design their own little space helmet like Auggie wears throughout the story. Each classmate was able to write a compliment on it about the person whose helmet it was, so that each student was able to have an image filled with kind words and compliments from their fellow students.