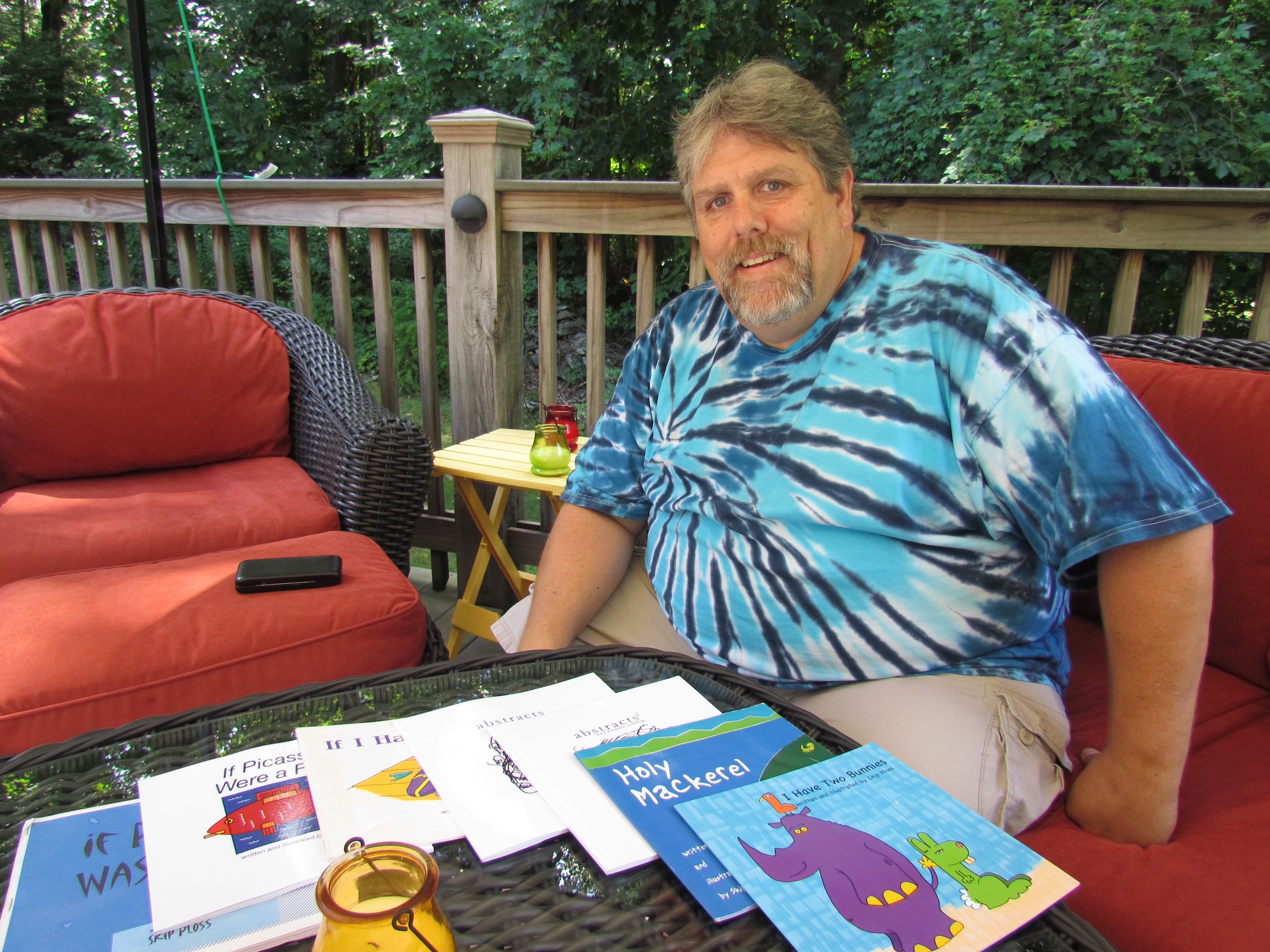 You might know Skip Ploss if you have a child at Miller-Driscoll School. That’s where he spends his weekday work hours as a special education paraprofessional and classroom aide. Or you might have heard of him if you’ve ever seen a production of Wilton Children’s Theater, where he frequently directs plays they stage. Maybe you’ve needed help retrieving a password to one of the school’s online platforms like Edline or PowerSchool Parent Portal, as he’s the district webmaster and handles much of their IT work.

But there’s one other way that you can get to know Ploss⎯as the author and illustrator of several self-published children’s books. He has written six different books, available on Amazon, and which reflect all of his different creative and professional experiences.

He started writing and drawing back in 2005, around the time he began working full-time at what was then Driscoll School, and the idea for his first book, If Picasso Were a Fish, came from the work he was doing in the classroom and during art specials with the students.

“I’d never experienced an art program at an elementary school before, and they were doing Picasso, Mondrian, and all these kids were really getting it. I don’t know how it came into my head, but ‘If Picasso were a fish…’ popped into my head. With a sketchbook I was carrying at the time, I started playing with Renoir and stuff like that. I wasn’t going to be able to replicate Renoir, so I leaned more towards abstract. I picked out artists that I thought I could use their style, and, then wrote the words and did the art,” Ploss recalls.

He wrote a second book around the same time, inspired by another classroom exercise, in which his first grade students would write and illustrate a gift idea for each classmate celebrating a birthday.

“It fascinated me, that kids would give anything because they have no concept of finance or anything else. You know, ‘I would give you a million crayons,’ or ‘I’d give you a limo with a pool in the back.’ I started writing them for all the kids in the classroom too,” he recalls, reciting the one that inspired the second book, If I Had a Gift to Give: “If I had a gift to give, it would be one you would love. This splendid purple cod of Cairo, who wears his sky-blue glove…”

At this point, the works weren’t really ‘books.’ Rather, they were loosely stapled, gathered illustrated pages that he carried in his backpack. The teachers he worked with got wind of what he’d written, and one–Maris Horowitz–was student teaching with kindergarten teacher Sal Giamo at the time. She asked Ploss if she could use the Picasso book to teach a lesson on as part of her certification. At the end of the lesson, she had the kindergarteners (this year’s sophomores) draw fish in the style of famous artists.

“Later in the afternoon Sal said to me, ‘You have to see what the kids did. They bound it all as a book and they have it in the library. ‘ So I went down with him and looked at it. Every single page that every kid did, you could see they referenced a specific artist and in some cases they referenced two, and turned it into their own thing. And I said, ‘That’s pretty cool!’ It caused me to go home and finish the book.”

Unfortunately, publishers weren’t as enthusiastic. Consider a response he got from Simon & Schuster. “A comment was, ‘Amazing! Like nothing we’ve ever seen before. What an amazing concept. [But] we won’t take it because we don’t think the kids can reference the art,'” recalls Ploss. “I wasn’t as depressed as I thought I would be because basically – you’re sitting in an office in New York, I’m in the classroom with the kid. Who is a better judge as to who will get what? Because I’ve seen it. So I started looking into self-publishing.”

Over the years he had other in-classroom experiences that inspired other books.

“Carol’s been teaching…for a very long time and she has this sort of amazing presence in the classroom, and whenever somebody does something really well in her class, she says, ‘Holy Mackerel!’  I listed to this all year long, ‘Holy Mackerel!’ Then one day–and this happens all the time, usually things pop into my head with the books–one day she said it and click! I knew exactly where the book was going to end and I just had to work out, the beginning part of it,” Skip explains.

His two books titled Abstracts grew out of a lesson he was asked to teach a two-day class at a school in New York State that teaches mixed-grade students in 3rd through 8th grades who come from difficult backgrounds. After really connecting with the kids and two days spent drawing and creating with them, he received a book they wrote for him about how he impacted them.

“After I finally stopped crying, I decided I wanted to do a book for them, so the first Abstracts book came from that. And both Abstracts books are dedicated to them. And I sent it back through the teacher to show them, that they had an effect on me as well,” Ploss recounts.

With his books self-published, in 2008 Ploss received an interesting inquiry–an email from a woman at the Austin Museum of Modern Art in Texas.

Jack of All Trades

One might wonder why fish play such a prominent role in his books. It might have something to do with the fact that at one time he owned a fish market in Wilton. Located where Marly’s Bar & Bistro now stands in Wilton Center, the fish market was a precursor to his illustration pursuit. “In Mackerel the style of some of the fish in that book are the fish that I drew for the coloring sheets I did for the fish market back in 1988,” Ploss says.

It was also in the mid-1980s that Ploss became an early-adopter of computers, learning graphic design and desktop publishing. He learned coding and HTML, and worked for several years in digital technology. But when he was laid off in 2003, someone suggested he try substitute teaching. He was eventually hired full-time by Wilton Public Schools, to work with some of the youngest kids in the district.  Often he’s a one-on-one aide working with just one child, sometimes he assists a teacher with a whole class. Ploss says his time in the classroom working directly with kids has been one of the most rewarding parts of his life.

“It’s cool to make a difference. When I see the kids now, you’re having this grown up conversation and here’s this grown up kid, you see that he made it all the way through and he’s done a phenomenal job and all that. You know, the downside, of working with kids at my age in that age group, we’re still trying to sort it all out and often you don’t see what the end result is so it’s nice to [run into them and] see them at that age. I’ve seen most of the kids I’ve worked with, in town and it’s very rewarding, it’s an amazing experience. That’s what keeps you going,” he adds.

Being able to combine all his interests and talents is something that has really made Ploss happy. Having the work he does in the classroom inspire his writing, which can in turn, impact more kids, is incredibly satisfying. He’s been able to channel his technical abilities into the digital and IT work for the school district. And he’s also been able to use technology to create the books, illustrating the works on computers and iPads and doing almost all the work digitally. Marrying all of it, has been immensely satisfying, he says.

“I believe in creativity and I think that cross pollination is an amazing thing.”

Ploss’ books can be purchased on Amazon.com.