Home Community Laughter is the Best Medicine for Wilton Family 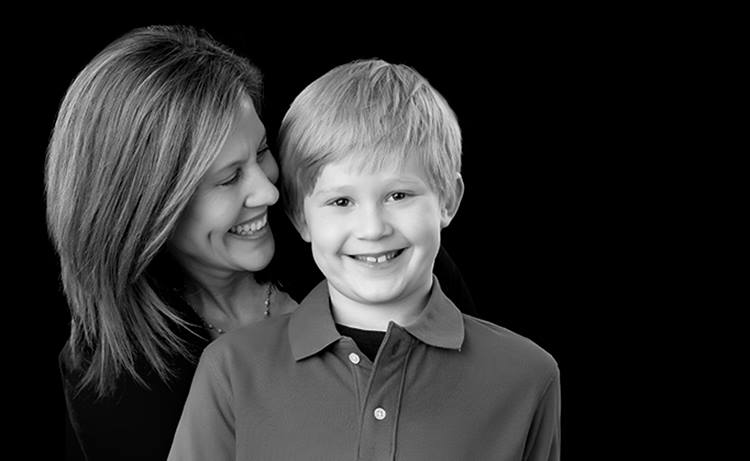 As the saying goes, When life gives you lemons, make lemonade. But how many of us would say, When life takes a scary left turn…laugh.”?

Life certainly did get scary for Wilton’s Siegel family in 2011, when their son, Cole, was diagnosed with HLH, or Hemophagocytic lymphohistiocytosis.  He was only 4 years old at the time.

“It’s a genetic disease [where] the body gets all revved up to fight an infection or virus and then doesn’t have the capability to turn itself off, so it starts fighting the healthy body. It starts attacking the liver, the spleen and other organs. and it’s usually fatal,” explains Cole’s mom, Janet.

While some of Cole’s doctors initially suspected HLH with the symptoms–fever and spider-bite-like marks and a skin rash–because it’s considered ‘rare’ and is not something many are familiar with, they mistakenly thought Cole might be getting better on his own. But one doctor urged the family to consult the leading HLH expert in Cincinnati, OH. “We were very lucky that this one doctor was smart enough to say, ‘I don’t know,'” Janet recounted.

The Siegels did fly to Ohio, where genetic tests confirmed the worst:  while the the Siegels’ two older children, daughter Carter (11) and son Ryan (10) didn’t have HLH, Cole did. That meant Cole would have to face a bone marrow transplant to save his life, and he’d need to stay in Cincinnati where the HLH expert at Cincinnati Children’s Hospital, Dr. Lisa Filipovich, would oversee his care. It also meant Janet and Cole’s dad, Jeff, would have to relocate as well to Cincinnati for about six months with Cole, leaving their older two children in Wilton with Janet’s parents.

“It was an insane, crazy time,” Janet said. “My head was all over the place, thinking, What does this mean? First of all, doing the research, trying to figure out what the disease is and what we have to do, trying to find out what the steps were for a bone marrow transplant and how to prepare ourselves, in addition to moving for the six months. Trying to figure out how our other kids would manage and adjust, and how we were going to keep their lives somewhat normal. And once we got to the hospital the only way I can describe it is holding my nose and jumping in, knowing that I had done the research, that we had found the doctor and hospital, it was jumping off the cliff and saying, You have to have faith.”

The Life-Saving Treatment and Moving Forward

They started making preparations for a bone marrow donation from Ryan, who turned out to be Cole’s perfect match. To get prepped for a transplant, Cole went through chemo for seven days, to knock out his immune system, and then give him the donor cells to try to build it back up. Cole underwent the transplant in April 2012.

Janet said that Cole handled everything like a champ.

“Maybe because he was the youngest of the three, that he was mature for his age, but we told him everything. We told him the whole process of the bone marrow transplant, that he would get chemo and that he would feel sick, that he would’t want to eat but that he’d have to eat, and that he would lose his hair; that he’d be in the hospital and not want to move. We were very upfront with him about what would be happening. He knew, and we never really hid anything from him. He was fantastic, through the entire process. He took all of his medicines, with little problem. He had to have a central line in his chest where they would draw his blood and do any infusions through that. For a 6 year old boy, although he didn’t want to move around too much, you have to be careful having that in there, and he was very conscious of it. He was conscious about keeping it clean and behaving when we changed the bandages. He has one heck of an imagination now, being in isolation–he can entertain himself for a long, long time. Because that’s what he had to do.”

By September 2012, Cole and his parents were able to return home to Wilton. They still had to remain cautious, and Cole had to remain in isolation for some time, wearing a mask most of the time and staying apart from even Carter and Ryan. Since then he’s continued to improve and has returned to school full time, starting first grade this year. He’s a smiling, fun-loving kid but they always keep an eye on his health.

“He’s always going to have to be monitored. One of the things we monitor is the engraftment, the percent of his brother’s cells that are in his body versus his. That number, we’re watching. Over the fall, it was dropping, so he’s had to go in for a couple of boosts, which are blood transfusions from Ryan. I think monitoring will always be the case for him. It’s all a matter of waiting–he will get sick, and we just need to see how he does and how his body reacts, because that will be the ultimate test to see if the bone marrow transplant works. It’s just waiting. Theoretically, it should work. The numbers say that he should be able to get sick and recover without another HLH flare-up. But until that really happens, we won’t know,” Janet explained.

So they take things day by day. And yet Janet says they do have a completely different outlook about everything. “We realize we really don’t have all that much control over what happens. Things kind of have a way of happening and you can’t constantly be on top of them. And we look at every day as a blessing. It’s cliche, but that’s what happens. Every day we’re so thankful to have him here and have our family together. Even the silly little fights he has with his brother and sister are somewhat enjoyable because a year or two ago those weren’t possible. It changes you for the better, because it really does make you appreciate life and the time you have, with everyone, more.”

They also have an appreciation for the part knowledgeable doctors played–doctors with enough knowledge and education about a very rare disease. They credit the efforts of Dr. Filipovich and the HLH Center in Cincinnati with getting the word out and so that even doctors who don’t see HLH every day were able to recognize it in Cole.

“Part of the reason Cole was diagnosed was because of education–because the HLH Center in Cincinnati has reached out to so many doctors to educate them about how important early diagnosis. There’s a statistic that HLH affects 1-in-200,000 births each year. There’s also an unpublished observation that it’s actually 1 in 50,000. That’s just due to better detection. Those 150,000 children that fall in the middle, it’s just not being diagnosed. It’s scary. We always say that we were lucky–the doctors were on it right away, they knew what to look for, but we hear of so many cases where kids are sick for months, a year, and so many lose the battle. Where we can increase education, they stand a better chance. It’s a passion of ours now, because there are so many families who weren’t as lucky,” Janet explained.

She has also said that one of the things that got the family through the toughest moments was laughter, even writing in an email to friends, “The one constant during these turbulent times was laughter.”

So they created a way to link laughter to education. On Saturday, March 29, 7-11 p.m., Jeff and Janet are hosting a “night of comedy” fundraiser in at Trackside in Wilton, to raise money that will directly benefit the HLH Center. Calling the night “LOL for HLH,” it will showcase three comedians: Dave Williamson, a Los Angeles-based comic who has appeared on “Nick Mom;” John Wynn, who has opened for Andrew Dice Clay; and Alex Morizio, a Miami doctor who also does standup.

Tickets are $50 apiece, and include food and two free drinks (beer and wine). AMG is catering it, and Vintage Fine Wines is participating as well.

And laugh out loud is what the Siegels hope people will do at the event, as well as contribute toward saving more lives, just like Cole’s. “Finding laughter where possible kept us all going,” Janet said. So too, will the laughter they’re helping create at the LOL for HLH event will hopefully keep many other families going too.

To purchase tickets, visit the website created by the Siegel family, www.lolforhlh.com.