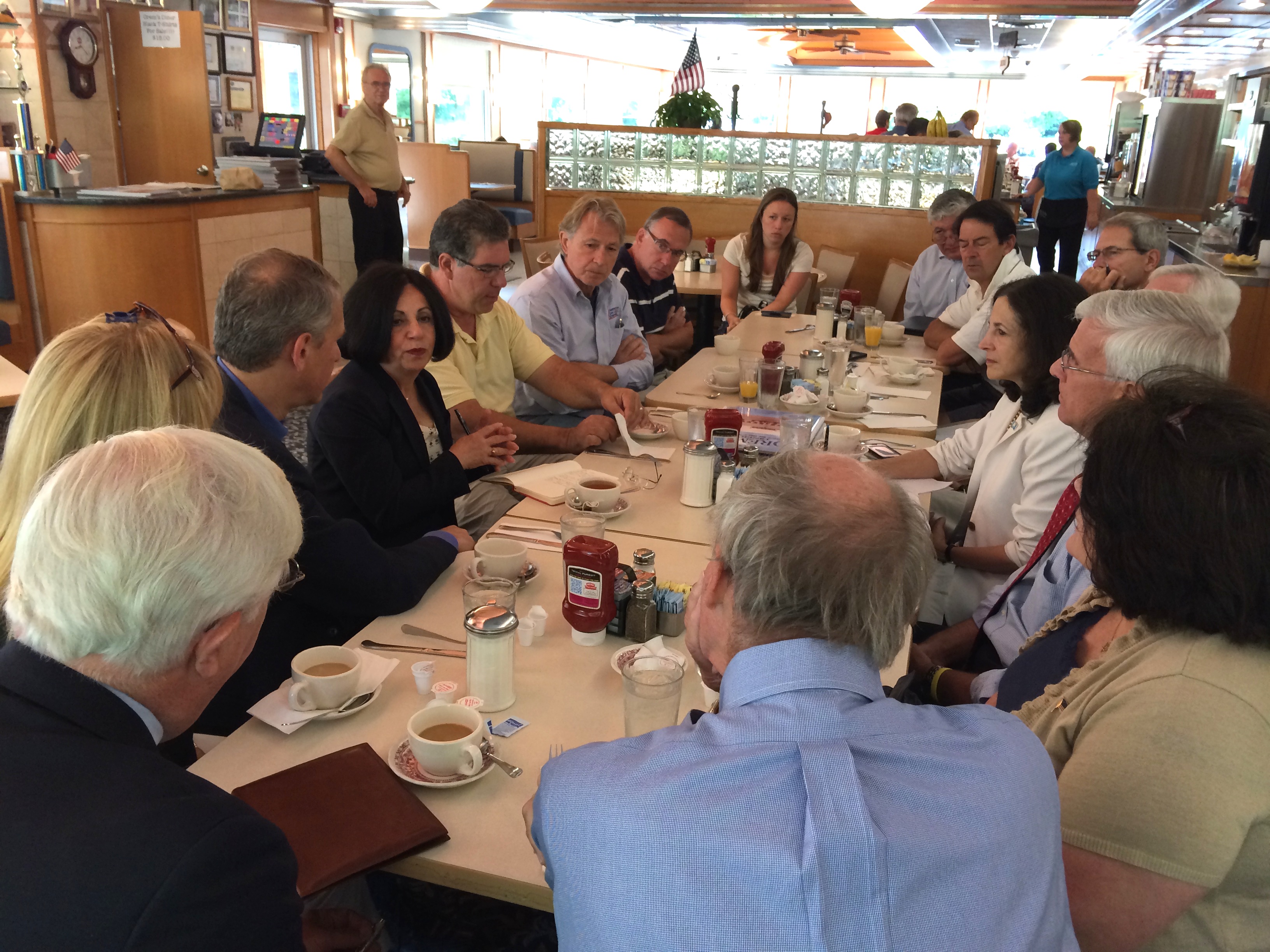 Wilton state legislators Gail Lavielle (R-143) and Toni Boucher (R-26) held a coffee to meet with constituents on Tuesday morning, July 1, hosting a roundtable at Orem’s Diner to hear what their voters say they find concerning.

Sitting with a group of about one dozen mostly supportive Republican constituents, the two asked those who joined them to speak about what was on their minds and what things were troubling here at home in Wilton and in Hartford. The major themes that resonated for everyone were high taxes and a difficult economic climate for business owners; what they said was Connecticut’s poor image nationally and low economic performance; infrastructure and transportation problems; and an increase in people leaving the state.

Things kicked off with a small business owner who said he’s finding the state a difficult place to stay competitive.

“I’m concerned about the incentives given out, they sort of pick and choose who they dig into the deep pockets for, as a favor from the governor or whomever. The rest of us, we’re just disregarded,” said Roger van Brussel, who owns American Dry Stripping, a small, Milford-based business that focuses on paint stripping. “There’s a cycle of incentives that people just come to expect to get them to stay in the state.”

He expressed a wish for better economic development policies that could help businesses like his reduce costs. Like several other participants around the table, he cited policies in other states that he said were better at helping both small and large businesses stay strong. Many of the people sitting at the table referred to a recent Gallup survey that reported CT (and Illinois) as the states where most people want to move from–researchers found that half of CT residents would move elsewhere if they could. They also referenced a recent report that found CT was the fifth worst state in which to make a living.

“Killing small business is really a concern. If this doesn’t stop, and this borrowing to fund pensions doesn’t cease, then we’re all–sorry–screwed,” said Peter Daniel.

“I’m a flight risk,” declared Jim Reid. “I’m looking at Georgia and North Carolina. I’m confident I can work and improve my quality of life outside the state–but I can’t get as much for my house. In my younger days, this was the greatest state in the union to live in; now it’s the worst.”

Jim Condron said both he and many friends feel similarly regarding residents’ ability to afford to stay in CT.  “We raised six kids here in Wilton. The kids are leaving. They can’t stay, they’re hoping their parents–60-70 year old people–can stay but they don’t want to stay either.”

Responding to a question from Lavielle about what kind of incentives CT could provide to attract new businesses and get people to stay, Condron suggested that CT position itself as a hub of both education and technology. “Look at education, every state is in worse shape [there] than we are, we could be the hub of education. We have the Nutmeg [Network], of fiberoptic, we’re somehow forgetting that,” he said, referring to Connecticut’s statewide, high-speed, fiber-optic network, with a secure, redundant and dependable Public Safety Data Network (PSDN) and Connecticut Education Network (CEN).

One of the complaints expressed by many were the taxes instituted by both Hartford as well as the recent plan suggested by Connecticut’s senator Chris Murphy to raise the federal gas tax. van Brussel said, “The mindset, why don’t you just manage the budget in your own house instead of trying to beat people down with raising more tax. It’s inane thinking.” Chuck Wessendorf focused on the difficulty of older residents to retire here. “We’re ranked as the [one of the] worst state[s] to retire in. I’m retired, why should I stay, other than the beauty, my kids are far away.”

That was furthered by Paul Lourd, who added that “you look at any organization that depends on volunteers to do work around town, it’s all older people. So you lose a huge base of people who give back to the community, because they can’t afford to stay here. Then you’re going to have to pay someone else to run the senior center, or pay someone else to do whatever it is.”

“What is the tipping point, where people realize something has to be done? Is everybody willing to ride the ship down? It’s been frustrating, whether it’s living in CT, whether the financial situation of the state, or the unemployment rate still being high, compared to other states,” said Rob Lamneck. “I’ve gotten so tired of us showing up at the bottom of these lists. Who’s standing up and saying, ‘Why are we behind Alabama? Why are we behind Arkansas?’ What are they doing that we’re not doing? There’s got to be lessons learned. Where are we going to be five years from now?”

Boucher responded that ideological differences along political lines in Hartford are to blame.  “The numbers are against us for the time being, the political numbers, but they’re changing in a direction of people who don’t think business is bad and profit is bad. They’re refusing to believe that by raising the cost, somehow people are going to leave. They don’t buy it, but the numbers are clearly there. Money drives who can make it.”

Lamneck continued the conversation: “There was an article that came out a few months ago that listed 13 states that were having financial problems, they lowered their state income taxes. That’s a pretty bold move, a lot of states would raise taxes, but they lowered them to try to make it more economical for people and to generate spending. I say, what are we doing that’s bold and aggressive to respond? I just don’t see it.”

Lavielle agreed:  “Even New York has done that, and it’s a question of expanding the tax base. If you expand the tax base, you have more people and businesses paying the taxes and it’s spread around. New York has given almost any business that comes from out of state the incentive of almost no taxes for a certain period, it was more selective than it sometimes comes across, but it was a big, bold move.” Boucher added, “Rhode Island reduced their income tax to 5.9 percent to be under CT and North Carolina is thinking of eliminating the income tax altogether. This administration has done the opposite. The fees at the DMV has gone to the highest ever. That’s an increase to every single person there.”

Some of the other issues that were touched on included the state Board of Education change to Common Core, troubles with MetroNorth, and transportation, about which Lavielle said, “To get anywhere in New England and you’re not already there, you have to come through Connecticut. Our transportation situation is a crisis–there is no other word for it. If that bridge gets stuck one more time, you’ll have people backed up all the way to Pennsylvania. It’s a nightmare.”

In a press release issued after the event, both legislators said that meetings of this sort help them represent their constituents better. “One of the most important parts of our job is listening to what’s on our constituents’ minds,” said Lavielle. “We take the feedback we receive at these outreach events and bring it to Hartford,” Boucher said.

Tell us what you think in the comments–do you agree that CT is facing a tough battle and things are gloomy? or do you disagree, and  think Hartford is making tough choices that hurt now but will make CT stronger in the end. Let us know what you think, here…