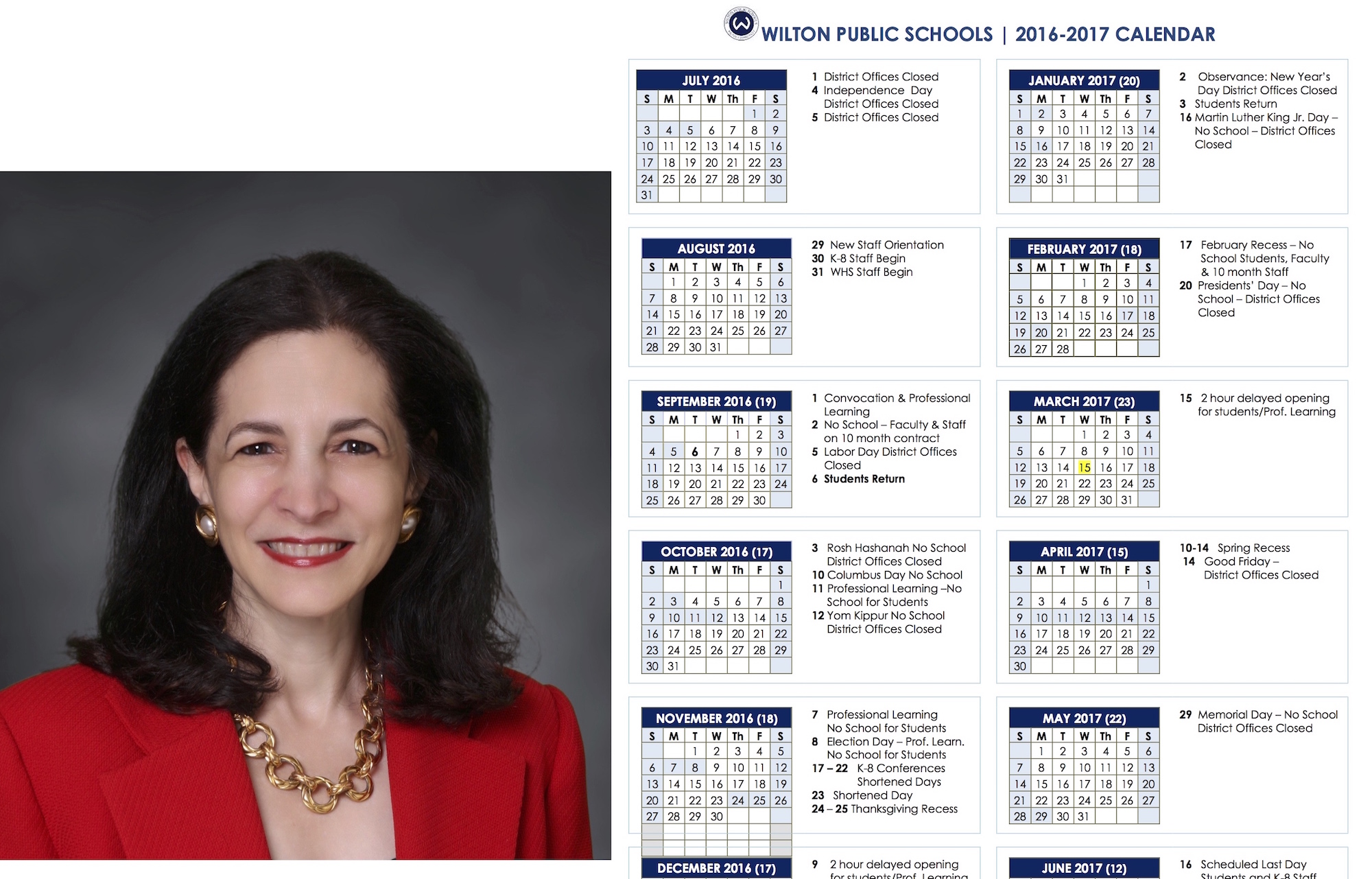 Last week (Thursday, Jan. 28), Wilton’s Board of Education voted to approve the proposed changes to the 2016-2017 school year calendar, which included a post-Labor Day, late start (Sep. 6) as well as an April break that some families in the district felt was not preferable. The changes had been widely discussed by school officials, and reportedly several parents wrote and emailed the BoE with their comments and objections leading up to the vote.

The calendar changes were due in large part to mandated regionalization of school calendars (as well as a late start to give as much time as possible to finish up planned summer work on the Miller-Driscoll construction project). In 2013, legislators in Hartford passed a law requiring adoption of uniform regional school calendars and despite local efforts by school officials and superintendent Kevin Smith, as well as opposition in Hartford by Wilton’s legislative delegation (Rep. Gail Lavielle and Toni Boucher), the measure is one the district eventually had to start to follow.

Before the BoE voted at last Thursday’s meeting, Lavielle spoke to the board members at Smith’s invitation to update them about the issue and recent developments in Hartford. She indicated that there actually might be a slight chance to do away with the regional calendars. While she made no promises, she said there doesn’t seem to be much support for it state wide.

GOOD Morning Wilton reached out to Lavielle to ask about the issue—how we got here, and what it all means. She sent us the following account:

In 2013, the General Assembly passed a law (PA 13-247, section 321) requiring the adoption of regional school calendars by all regional educational service centers (RESCs). According to the law, each school district in a RESC must adopt the same calendar. Most, if not all, school districts in Fairfield County expressed opposition to regional calendars from the beginning, and still do today. All members of Wilton’s legislative delegation voted against the bill in 2013, and we have continued to oppose the concept and to try to change the law.

The notion of regional calendars received its strongest support from House Speaker Brendan Sharkey, who is a strong advocate for obligatory regionalism. The legislation passed in 2013 had originated in his MORE Commission, which he had established to work on ways to produce regional efficiencies, and which has occasionally proposed initiatives to create new layers of regional government. The regional calendar legislation was, in fact, raised not by the Education Committee, but by the Planning & Development Committee, which is focused on municipal government and regional matters.

In 2014, I was able to pass amended language on the floor of the House to prolong the deadline for districts to implement their regional calendars. At the time, I had suggested making it possible for RESCs to vote to opt out of the requirement. I was, however, told by many legislators, as well as the chairs of the Education and Planning & Development Committees that this idea would not fly, because the districts in Fairfield County were the only ones opposed to the regional calendar, and many of the legislators from upstate were not, as often happens, anxious to grant Fairfield County any special favors.

This year, however, I have received new information, and this is what I communicated to the BoE last week. First, I heard from the governor’s office that the issue of the regional calendars was not one that was a high priority for the administration. Then, I heard from the Education Commissioner, Dianna Wentzel, that she had been receiving calls from around the state from districts that have decided that they don’t want to adhere to a regional calendar. A number of these districts have even said that they won’t do it, as there is no enforcement provision. Finally, I met with staff of the CT Association of Public School Superintendents (CAPSS), and they confirmed that they had been receiving the same feedback from around the state. This has all indicated to me that we might have a chance to succeed in amending the current law to make opt-outs possible for RESCs.

As a next step, I have asked CAPSS to conduct a quick survey of the state’s districts to learn more about their positions on regional calendars, including a number of questions. Do they think adopting a regional calendar could save them money? If so, how much per year? Do they support or oppose adopting a regional calendar? Why? Do they intend to do it? They have promised to come back to me with the responses by mid-February, which would provide plenty of time for discussion of raising a bill with committee chairs. This would not affect decisions Wilton must make this year, but if we did succeed in amending the current law, it would certainly allow the flexibility in future years.

That is where the matter rests. I will do everything possible to try to make this happen. As always, however, I told the BOE that I cannot promise anything in terms of a final decision on behalf of the 150 other legislators in the House and the 36 in the Senate. But now, as opposed to two years ago, this is at least worth a try, and I will try my best to get legislation passed. And if the information obtained by CAPSS reveals that districts across the state are indeed opposed to regional calendars, we may have a chance. There is still the Speaker’s opposition to deal with, but if enough districts disagree with him, this could work.

The BOE then asked me if I knew what would be on the education agenda during the upcoming session. I replied that it was a little too early to tell, except that I am certain that we will be working very hard once again to pass a new bill protecting the privacy of students’ personal data. The concept has strong bipartisan support, as it did last year, so I am optimistic that we’ll make progress in that area.