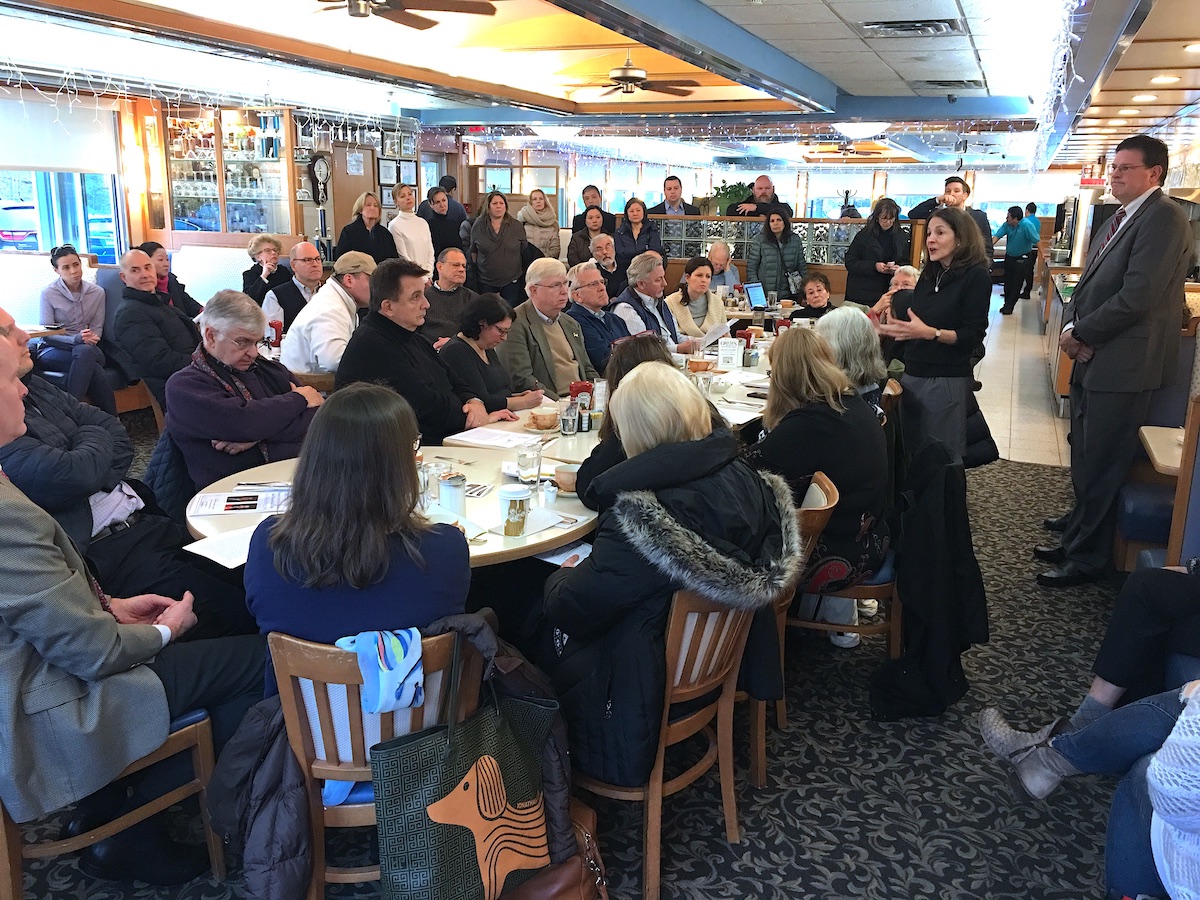 It was billed as a Constituent Coffee, but heartburn seemed to be the main thing on the menu, and no one was ordering the special of the day–taxes.

Sixty constituents had come to Orem’s Diner to listen and talk with State Representatives Gail Lavielle (R-143) and Tom O’Dea (R-125) at the coffee hosted by the legislators, an event that any other year would likely attract 15-20 people tops. But Tuesday morning, the guests filled one half of the restaurant, and the space was standing-room-only. They spoke of their concerns about proposals that have been introduced recently since the Jan. 9 start of the CT General Assembly session in Hartford–proposals to impose a sales tax on groceries, tolls, a statewide property tax and a change to the automobile property tax. But most of all, people were unhappy with a topic that has the whole state abuzz–consolidation of school districts. They were, as Lavielle had described in a recent meeting of the Education Committee, distressed.

Republicans Lavielle and O’Dea talked about things along partisan lines (although they both said they always hope to work with their colleagues across the aisle).

“We’re fighting all those initiatives. School regionalization, we’ve got our own family leave, we’re fighting the tolls. We’re trying to get as many people on the other side of the aisle to join us,” O’Dea said, adding, “Obviously the Republicans are going to fight, we have a spending issue not a revenue issue.”

Lavielle echoed that:  “I want to urge less spending on things we don’t need. Not on the things we do need, like important social services.”

But the main course that preoccupied most of the attendees was the school regionalization bill–SB 454, introduced by Senate President Pro Tempore Martin Looney (D-New Haven). Lavielle assured everyone that the bill was widely feared across the state, and that Wilton wasn’t alone in the fight against it.

“We know how wrong it is to force this on districts. We’ve got it on the radar, everyone knows this is a controversial issue, and it will get a lot of attention,” she said.

Lavielle said people from all over CT are contacting the legislators, and both she and O’Dea encouraged those in the room to keep it up. They suggested emailing not only the governor and the Education Committee chairs and ranking members, but also all the members of the Committee, in order to really communicate just how upset everyone is.

“Someone made fun of me for using the word ‘distressed.’ He said, ‘That’s ridiculous,'” she recalled. “This is going on throughout the state. We have colleagues who represent those small towns hearing from their constituents, the issue is getting a lot of statewide press, and a lot of local press. The distress is very widespread.” O’Dea said it was important for everyone to reach out, not just his fellow Republicans. “We need people who say, ‘I’m a lifelong Democrat and I’m never going to vote Democrat again if this passes.’ Focus on Sen. Looney and the governor.”

Because of Looney’s stature in the Senate, his bill will almost surely go to a public hearing, likely sometime in February. The date won’t be announced until five days before it’s scheduled; because Lavielle is a member she’ll try and let district constituents know as early as possible. And they both encouraged as many residents as possible to go to Hartford when a date is set to testify as against the bill.

“When public hearing time comes, having a huge showing of people from various towns enraged would be very, very helpful. That’s difficult for the committee to resist,” she said. And turning out in force will discourage the legislators from letting the concept linger. “The uncertainty will continue to hang so we need to kill it dead immediately.”

O’Dea agreed. “If you think Sen. Looney won’t have a hearing on his bill, you’re crazy. This hearing needs to last to the wee hours of the morning. We need people who will go up by the busload and stay all night long. If you stay until 5 p.m. it doesn’t register. We need buses up to Hartford. It’s a pain, Gail and I know, but to hear from you is what we need on this bill.”

The duo also let everyone know about a statewide petition sponsored by the CGA House Republicans, and encouraged people to sign either that one or the Change.org petition currently circulating in Wilton. As of Tuesday evening, more than 2,300 people had added their names to that.

Toward the end of discussion, the legislators were asked what was the motivation behind the introduction of the bill.

O’Dea opened the door to some of the subtext underlying the issue, and said: “It’s the first step to integration of the school systems. They’ll market it as diversity.”

Lavielle was quick to point out she wasn’t on the same page, at least when it came to a question of race. “I disagree, I don’t think that at all. I think it’s a money thing, it’s a fiscal thing.”