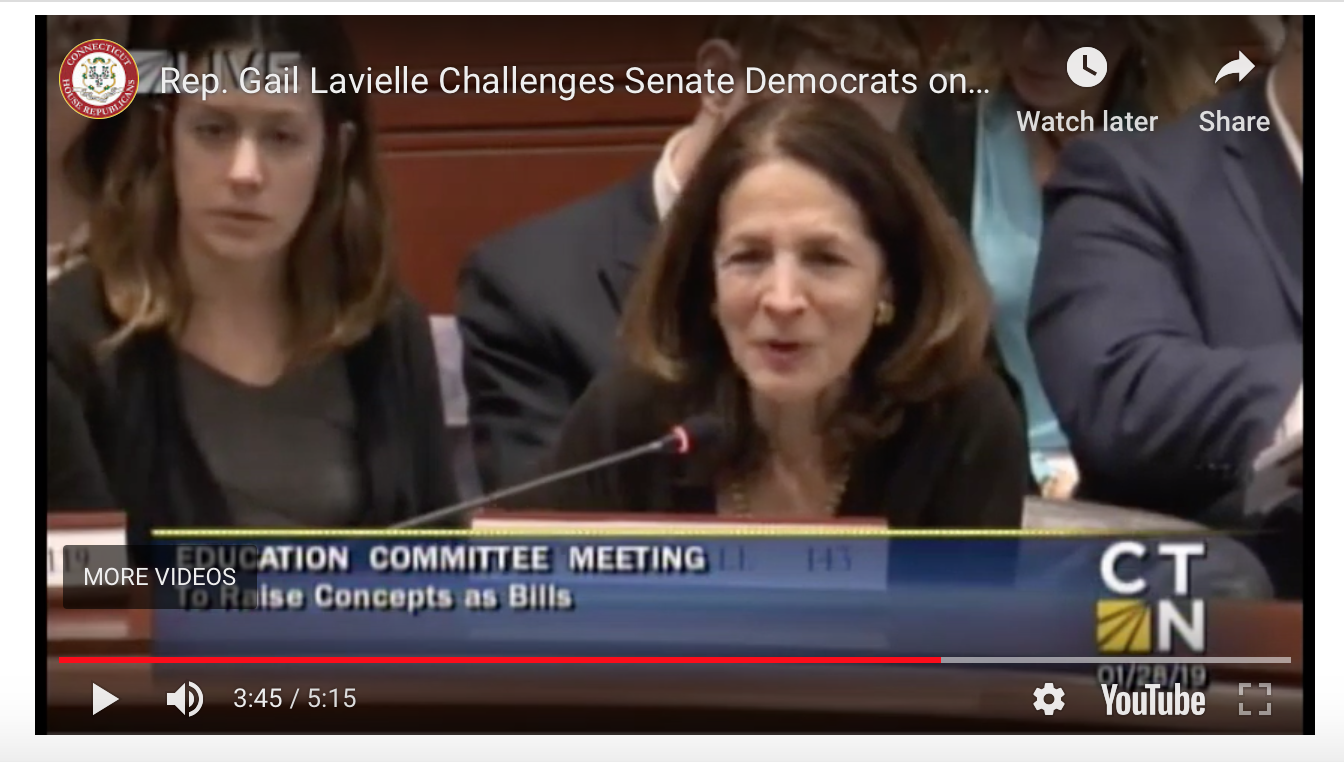 Monday morning, the Education Committee of CT’s General Assembly met to begin shaping the committee’s agenda for this session. As part of the discussion (in front of an atypically packed hearing room), Wilton’s state representative, Gail Lavielle (R-143) – who serves on the committee – raised the issue about SB 454, An Act Concerning the Creation of Regional School Districts. Introduced by Sen. Martin Looney last week, the bill created a firestorm of reaction, much of it negative, in Wilton and across the state.

She raised the issue as part of the discussion about what concepts would be on the agenda. As she explained in a Facebook post later on Monday, at this point in the committee’s agenda setting, there is only discussion about generic concepts and not specific bills.

When the concept of regionalized education services was raised, Lavielle asked whether anything the committee would discuss or pursue would include forced consolidation of school districts, including language from SB 454 proposed by Looney.

“Many people that I have heard from have been very distressed simply because of the existence of the bill, regardless of what it may ultimately say, because they don’t feel that someone far away should be telling them what to do with their children or how to shape the institutions in their own town. They really feel the schools are the soul of their community. The distress is due to the forced character of the regionalization that the bill is suggesting.”

She later reiterated, “The distress has been so great, I’ve never seen anything quite like it.”

While the Education Committee’s co-chair Sen. Douglas McCrory (D–Hartford) said he had not read Looney’s bill, and didn’t know the specifics, he said he didn’t think anyone on the committee was in favor of anything being forced. “It’s a great idea to have a conversation about regionalization, but in this particular concept, I don’t think that idea will go.”

“When we sat down to discuss this concept, the intent was to give districts a choice. It wasn’t a mandate it, it was nothing to be forced. My intent in moving forward it to make this isn’t part of what’s being discussed, in regards to [SB] 454.”

In thanking her committee colleagues, Lavielle complimented them as always being “reasonable people”–and then underscored her perspective about the regionalization topic.

“My concern is the perceived, what this looks like sitting there. I would feel more comfortable if the title of the concept said it was enabling voluntary regionalization of services, if that were possible,” she said.

While McCrory said, “I don’t know how I can make myself more clear about this particular concept,” seemingly referring to not supporting ‘forced’ consolidation, he declined to change the title–or the possibility of discussing all options.

Lavielle didn’t let McCrory get the last word–at least in this exchange. “Thank you, Mr. Chairman, just for the record, I do think that voluntary regionalization is a conversation we absolutely must have, thank you.”

Of course, there were advocates of compulsory consolidation on the committee as well. Widely quoted in press coverage of the meeting was Rep. Michelle Cook, (D-Torrington), countered, saying that if “regionalism is what we have to do to make education in the state of Connecticut work, then we need to figure out how to make that work.

“I know that forcing things is not always the right way to go,” Cook continued, “but sometimes we have to help people get there because they are not going to get there on their own.”

Rep. Roland Lemar, (D-New Haven), said it was “a shame” that people were expressing “great distress” over regionalizing school districts.

“I think that’s a shame because a lot of communities have benefited greatly by the structural inequities that are inherent in our system today,” Lemar said, adding that in order for change to happen, “we have to have conversations that are hard and challenging.”

In an interview with the CT Mirror, Looney said the state needs to address the issue of too-small districts that are losing students. According to the Mirror, Looney’s focus is on consolidating administrative functions rather than schools, in order to reduce overhead and achieve “economies of scale.”

SB 454: OPENING THE FLOODGATES
Please share. This morning in the Education Committee, we met to vote on part of the committee’s agenda for the session, which included a list of generic concepts — not bills, just concepts with titles, but no bill numbers. They are general subject headings which will be developed into bills later. Usually we just vote yes, to wait for the content. Today we had a discussion first. One of the concepts was: “AN ACT CONCERNING REGIONALIZATION OF EDUCATION SERVICES”. I asked whether this concept would cover forced regionalization of school districts, including the language of SB 454 from Sen. Looney. The Committee chairs gave me their word that it would not — that the concept we voted on today would include only measures facilitating VOLUNTARY sharing of services, and that SB 454 would be treated separately. Fine, but it was the occasion to register opposition to forced regionalization of any kind. We made the issue very visible on the radar screen at the Capitol. It is now general knowledge that opposition is broad and statewide. This video captures part of the discussion.