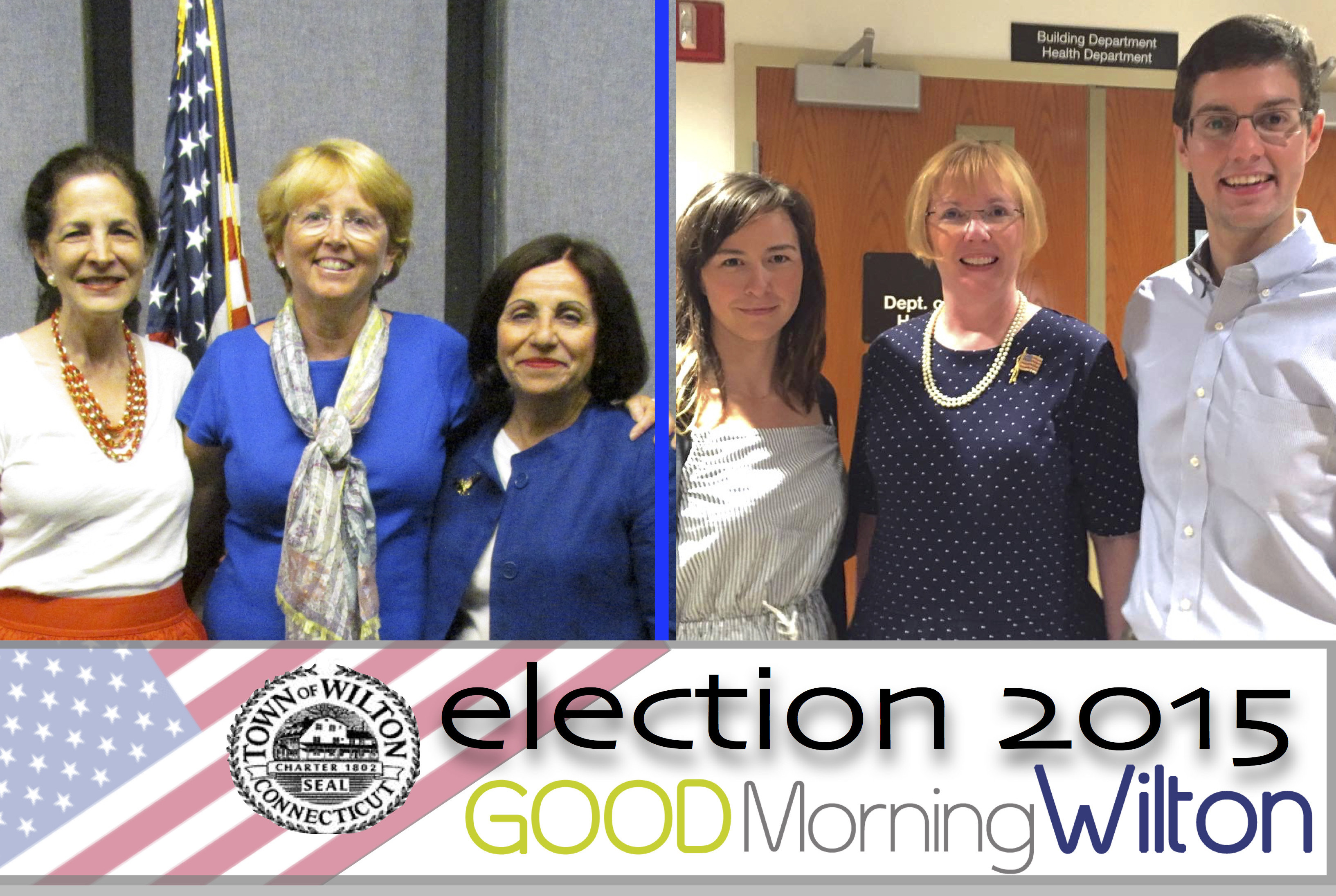 Who will be Wilton’s first selectman following the Nov. 3 municipal elections?  It’s too early to say, but one thing’s for sure—the winner will be a woman.

Last night, Wednesday, July 22, the Wilton Republican Town Committee (RTC) met at Trackside Teen Center and unanimously nominated Lynne Vanderslice to run for the office of first selectman. Over at Town Hall, the Democrats at the Wilton Democratic Town Committee (DTC) caucus cast the majority of their votes to nominate Deborah “Deb” McFadden.

During the nominations at both meetings, people alternately referred to the nominees as candidates for selectman, selectwoman and selectperson. Whatever the official title turns out to be, the person who will hold it and take office will be new to the job but not new to working in town. Both candidates are long-time residents who have served as volunteers on civic and municipal boards and have been involved in town politics for a long time.

Vanderslice thanked the RTC for the nomination and told them of her qualifications in her acceptance speech.

“The first selectman position is a CEO position and I have the executive experience. I have managed a department of 150 people, the size of the town workforce. I have the added benefit of the fact that I was a CPA so I bring a level of finanacial experience that doesn’t currently exist on the Board of Selectmen,” said Vanderslice, who is a current member of Wilton’s Board of Finance.

McFadden was energized by the fact that she was the first candidate for first selectman that the DTC had put forward in 10 years.

“I’m really excited. I can’t tell you how pumped I am,” McFadden said. “I’ve been making lots of phone calls, I’ve been at the street fair and fireworks talking to people, we’ve been organizing and fundraising. So far things going very well. I’m really grateful for the confidence Wilton Democrats have in me, and consider it a privilege to be their candidate for first selectman of this great town of Wilton. Democrats are going to win, and I am all in this race.”

They did differ on how look at the fact that it’s a two woman race.

McFadden said having a woman-only race was an apt symbol for current society:  It’s a surprise because I thought it would be a distinction just I would have, because we’ve had a long tradition of just men in the first selectman’s seat. This is the year of the woman, that Wilton will definitely have a woman as first selectman–I hope it’s me.

I think people are recognizing that we need more diversity in the town. It’s a recognition of the capabilities of women and people becoming more aware that having a board that has diversity of any nature–by gender, age or background–brings a richness that, when you have all similar people you don’t have the diversity of ideas that strengthens an organization. More diversity is a benefit.”

On the other hand, Vanderslice called the fact that both candidates were female, “absolutely irrelevant.”

“I really want to be evaluated based on my qualifications and my ideas. I’ve always worked in male-dominated industries, so it’s important to me that people look first at my qualifications and first with my ideas, and ignore my sex. I don’t think it makes any difference. The issues are the same and what you need is the same. When I moved here Peggy Gill was the first selectman. There was a woman in charge then, so I don’t focus on it now.”

GMW.com asked each of the candidates a few questions following the nominations.

GMW:  What’s the top issue whoever gets elected is going to have to start to tackle, day one on the job?

Lynne Vanderslice: It is without question, taxes. It’s what you hear from people. When I met with the largest property owner, he had three issues, and taxes was one of them. He said we are not competitive–we’re the highest per square foot. I hear it all the time from realtors. Without questions, it’s the taxes. We have to figure out a way to not have them grow and even look towards getting that mil rate reduced.

We have a plan of conservation and development so we have to work within that. They have identified some areas that could be used in a different way. But that is a whole process of working with the people in that neighborhood and coming up with a plan that really works. When we look at commercial development, part of it is also having alternative housing that will attract new people and retain people also. And it helps turn the housing market.

We’re pretty well developed along the lower Rte. 7, we do have some opportunities further up—we have that space across from Town Hall. So there are areas where it can happen. And we’ve got to work with people in town. Being here 28 years, I have not seen the level of ‘vacancy’ signs we have now. Of course, we have a lot more space than we used to have. The original mission of the Economic Development Committee was to increase revenue, and I’d like to see it expanded beyond that and to have it also come up with some ideas to help.

I’d like to make downtown more dynamic, and a place that people want to go to. You have a lot of Wiltonians that eat and shop someplace else, and what can we do to make it a place that becomes a destination for even our own citizens. Those are the things where we can make some improvements.

Deb McFadden:  There are multiple issues, not just one.

There’s economic development that’s going to be a real priority. Seeing how we can work with our Economic Development Commission, the Chamber of Commerce, citizens and local businesses, and working together to come up with a plan and action steps to see how we can help the business community.

Another area is seniors. After recently meeting with the task force, I’m interested in various programs to see what we can do for our seniors in town.

I also really heard the voters when they voted on our recent budget, when more people voted against it. I hear that people are concerned about high taxes, that we need to do what we can. We still need to provide appropriate services for the community.

The other thing is communication. We really need to do more to improve communication from town hall to the citizens so they know what’s going on, they know when we’re having any type of a town meeting or vote, or even when we’re working on projects. If there’s an opportunity for them to participate in an input session, that’s the type of thing we need to do. Looking at our website, and seeing how to make it more user-friendly. There’s a lot of things we can do so that people of Wilton feel like we’re hearing them and they understand how to get their message into Town Hall.

GMW:  There has been a lot of ‘chatter’ about improvements and amenities that people want to see or see changed in town.

Deb McFadden: Since I announced I’ve been on a listening tour. I’ve spent hours walking through the fireworks, I’ve been calling people. They’ve been stopping me everywhere I go–stores, the gas station, people stop me to tell me things. The street fair that the Chamber did was fabulous. I stood out from 10-4 talking to citizens.

It’s interesting, I get conflicting information. Someone will say, ‘Lower the taxes!’ The next person comes along and says, ‘We need a swimming pool in town! Will you put in an ice rink?’ That costs money and is the opposite of the person who just said bring my taxes down.

We need to look at each proposal on a case by case basis, if it really meets the needs of the citizens. Is it really appropriate to do at a point in time based on the economics of what we’re facing.

Lynne Vanderslice: I read 411 and 412, and somebody just gave me the Wilton political Facebook page… There’s a lot of conversation now about Merwin Meadows and I found that really informational. We need to look at what is happening, why is it happening? We’ve seen the revenue grow. One, we have to make sure it is available to Wilton residents. We approved $10,000 to have a study done. If we’re going to spend the money to improve it, then we need to make sure the Wilton residents have the right access. And I think we do need to improve it.

There was a period in time where we had concerts down there. I would like to see if we can return to those kinds of things. I do think the public-private partnership is the way to go. That playground down there, that’s where I met [former Bd. of Finance colleagues] Jim Meinhold and Andy Pforzheimer, because my husband was down there working with them to put that playground in. If you drive all over this town, you’ll see a lot of names of people my age, on the baseball field, and some other things, where we wanted to have additional amenities so we were active with that. People stepped up and did those in a public-private way. People need to understand that’s a great way to go, it’s a way to get things done much more quickly. It’s a way for people who are focused on certain topics, that’s how you get it done. Just like the people trying to do the field.

But I definitely think we need improvement in those areas.

GMW:  A member of Sensible Wilton mentioned they would support Lynne. What do you think of that?

Lynne Vanderslice:  [Sensible Wilton president] Alex Ruskewich said to me, ‘I know we don’t agree on everything,’—in fact, I publicly and privately voted for the Miller-Driscoll project. But he said to me is, ‘I know you to be fair.’ He also added that I deal with facts, that I get the facts and make my decisions based on facts. I think that’s where that support is coming from.

We have to learn from this. What could we have done differently as a town so that we never would have got to this point? I am a big believer in building a consensus. But where you do have something that is so close like that [referendum vote], right after you need to bring those people in and try to work together toward some future common goal. This has to play out in court, and we’ll see where it ends. There’s been a lot of fracture in this community, and we need to heal it and move on, and everybody does have a lot of the same shared goals.

Deb McFadden:  I think it’s unfortunate Sensible Wilton has sued the town. It’s ironic they’re so worried about the expenses of the school when they are actually, by their very actions, costing the community more money.

I think it’s interesting that they have put their support behind Lynne. I think it’s an interesting observation. I’ll just say, if they chose to support one of the candidates, I’m just as happy that it’s Lynne and not me.