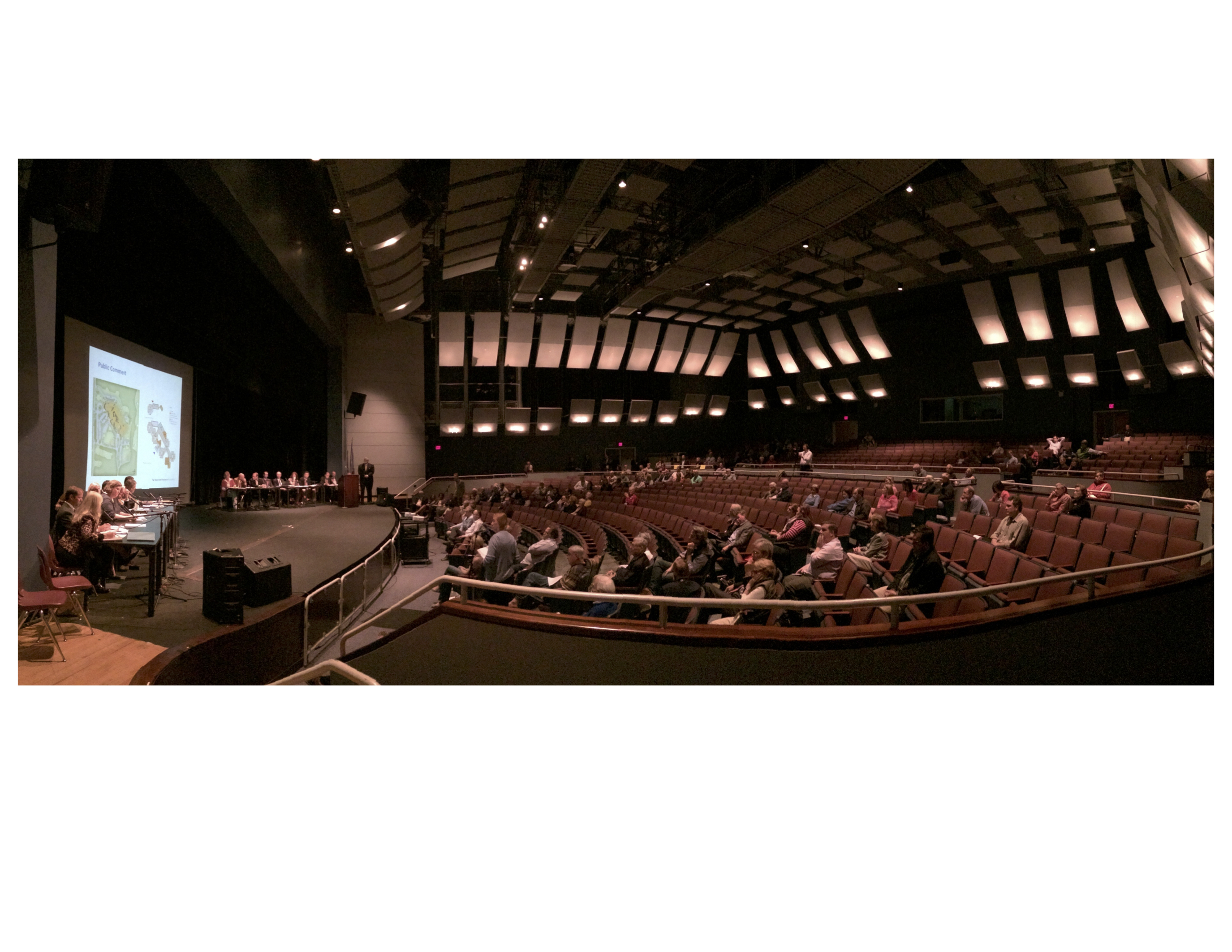 While the audience of about 150 people* at last night’s Special Town Meeting and Vote on the Miller-Driscoll School Renovation Project was small, the fireworks and drama that took place during the meeting seemed larger than life.

Moderator Stephen Hudspeth‘s asked for civility from all public commenters, and yet the evening saw a couple of public outbursts and a dispute at the end when a Roberts Rules of Order ‘call to question’ wound up ending discussion. That led to at least one angry resident, who alleged that his First Amendment rights had been violated because he wasn’t able to speak before comments were closed. The drama was compounded by another commenter calling out members of the building committee who hadn’t been officially sworn in or signed ethics statements–something acknowledge by Wilton’s town counsel, Ken Bernhard, who said it was “an oversight” that had been rectified and that there were no ethical issues.

During the actual balloting after the meeting ended, only 142 Wilton residents cast their votes; however, the outcome of whether or not town voters will approve the $50 million price tag won’t be decided for sure until voting continues Saturday (Sept. 27, 9 a.m-6 p.m. at the Clune Center).

But what is clear is that questions about project cost and reasoning linger for many residents, despite consistent messaging from all town leaders–that “the proposed project is the fastest and most cost-effective way to comprehensively renovate Miller-Driscoll School. When the project is finished, Wilton is going to have a beautifully renovated school that’s going to feel new, look new and have more efficient interior and exterior circulations, there will be dedicated, appropriate and sufficient pre-school space and the building will have lower operating costs, it will be very secure and it will be something you will be very proud of.”

While that quote came from project co-chair Karen Birck last night, it was repeated many times during Tuesday’s meeting and it’s been said several times since the town has set out to convince voters to support the plan. Birck, her fellow chair Bruce Hampson and first selectman Bill Brennan said the same thing during a sit-down interview with GOOD Morning Wilton last week.

There’s approval for this project, that’s for sure. The letters to the editor we’ve received in support for this project outweigh those against–in fact, we haven’t received any that disapprove of the project. That’s not to say that dissension isn’t out there–an ad-hoc group of people calling themselves “Sensible Wilton” have distributed leaflets and flyers around town in the last couple of weeks and handed them out last night at the meeting. (They were legally prohibited from doing so following the meeting in the Zellner gallery where the balloting was done, however.)

Their criticisms? That projected costs far exceed what has been spent to build other schools; that taxes will rise instead of property values; and that the roofing, window and HVAC flaws could be fixed for far less money faster than the renovation project timeline sets forth. They say more ‘sensible’ options should be considered.

At last night’s meeting, several speakers did ask questions about other options, and it’s apparent that not everyone is sure that this project is the right course of action. That’s surprising, considering several things:

Despite the many years spent by the volunteer members of the very qualified building committee that worked on putting the proposal together; despite the rare, unanimous support of all members of the Board of Selectmen, the Board of Education and the Board of Finance; despite having very credentialed construction and architecture experts (Turner Construction and Tai Soo Kim Partners) who put together the plan and budget; and despite the effort put into trying to convince the town of its value leading up to Tuesday’s meeting… despite all these things, the vote isn’t a ‘sure thing,’ and it also doesn’t seem to be falling along typical “seniors vs. parents” lines.

One thing most people acknowledged is that the decision facing the town is one of the most crucial facing voters. At issue is the present condition of Miller-Driscoll School–with aging mechanicals and a structure that has outlived its life-expectancy, something must be done to upgrade the facilities for Wilton’s youngest students. Technology and security needs have changed and Wilton must adjust to make sure its youngest students have the necessary educational advantages and are protected.

At the end of the day, the biggest question is whether or not voters feel we’ll be getting value out of the ultimate projected $43,894,000 price (after the state reimburses Wilton an estimated $6,128,000, knocking down the $50,022,000 overall projected cost). The stakes are very high.

Will they listen to Ty Tregallas, from Turner Construction, who cautioned against comparing the project against any other one because every project is different? Will they hear him when he says, because the $394 per square foot cost is only $2 above the median price of $392/sq. ft., Wilton is “in a good spot”?

Will they listen to the town’s financial advisor, that the projected tax increase for a property at the average assessed value of $545,315 would be $169 in 2018–the year projected to take the brunt of the increase from this project? And that by 2021, taxes are projected to be “well under 2015 levels”?

Will they listen to the chair of the Board of Education, Bruce Likly, when he said that the main reason for not building a completely new school is that the cost for that would be “north of $60 million, … This renovation is essentially a new school. When I saw these plans I realized we’re getting a new school.”?

Will they sympathize with Kurt Noel, who said that “Many people in town are asking how did it get to be so expensive, and did it have to be so expensive?  I would argue this project has morphed from its original scope of renovation.”

Will they agree with Alex Ruskewich, who criticized the “poor management of maintenance” of the current school, alleging that there are “warranties never enforced” and instead of holding anyone accountable, the town will “throw more money” at the problem.

Will the words of Renee Walsh resonate, when she worried that, “Most of the projects don’t go as well as we want them to go. How will you be sure if we approve $50 million, the price will go to whatever it takes?”

Will they pause after hearing concerns expressed by Susan McCall, who pressed officials on whether testing for hazardous PCB’s would be done, whether or not the project passed. Bruce Hampson said that such testing was part of the project costs, but it seemed to leave her with further questions about whether or not children possibly were being exposed now.

Would they listen to several commenters who asked whether or not other options had even been considered–building new somewhere else? Building a completely new school on the current M-D site? Would they be swayed by committee members who said all those things had been considered over and over again–and that this proposal was far and away the best and most cost-effective option?

We’ll have to see, but hopefully, the issue will be decided by far more people than just 142. The stakes are too high for low percentages.

* not counting town officials and employees