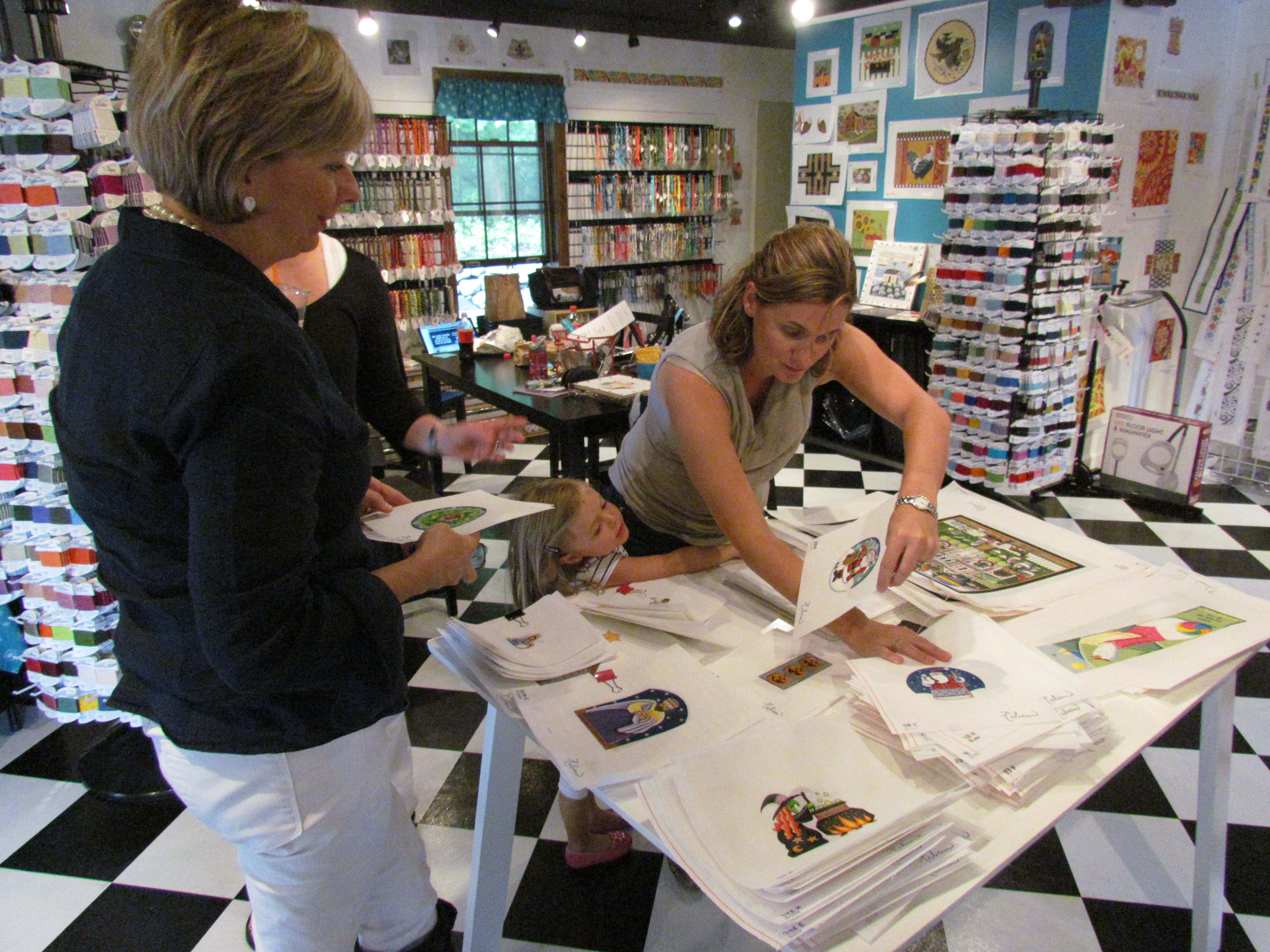 Suzie Vallerie, the owner of the Enriched Stitch, is as charismatic as she is a talented stitcher; the way she talks about needlepoint can get even a novice excited about picking up a needle and thread.

Open at 196 Danbury Road since March 2012, the store is a needlepointer’s heaven. “People are going to find everything they need to needlepoint, and they’re going to find other people who needlepoint as well. They’re also going to find new friends—lots of customers have made friends here, and I see emails shooting across between people who’ve met here at classes and just being here.”

The community part of doing needlepoint is a bonus—it’s not just pick-up-a-craft and go home. With an inviting table where customers can sit and chat while they work on projects, the store is a great way to connect to a community of people. “There’s a group of women working on a project together. We also have a classroom upstairs, for kids on up to however old you want to keep stitching until, as long as you can see!” laughs Vallerie.

The Enriched Stitch hosts visiting teachers from all over the country, and Vallerie, who has been stitching since she was 12, teaches and creates stitch guides for novices on up.

“People can learn everything from doing basic needlepoint, to learning how to embellish a canvas—what we call enrichment, and what one teacher calls bringing a canvas to life.” Looking around the store, you can certainly find lively canvases and just about any creative stitching project possible to dream up.

There are canvases with holiday themes, modern décor, playful sayings, traditional images, and just about everything else.  “A lot of people do Christmas ornaments and stockings. My sister-in-law just made a purse. You can make belts, you can do backdrops and things that are framed, pillows, 3-dimensional toys…you name it,” Vallerie said.

The community part of things doesn’t just start and end in the store itself. Vallerie is hosting a three-day retreat for people who love the craft at the Inn at Water’s Edge in Westbrook, CT.  Participants are coming from all across the country to take part.

Part craft, part art, needlepoint has its devotees. “People do it for all sorts of reasons,” Vallerie said. “A lot of people are sitting around waiting all the time—better than sitting like this [Vallerie laughs and mimes cell phone texting]—it’s very meditative, and people do it to be creative, they don’t want to be sitting with their hand in the cookie jar all night long, they want something to do after the kids go to bed. We even have a large customer base that is recovering alcoholics. I did it when I quit smoking—I stitched all day long!”

Vallerie also has a large following from far outside Wilton. Part of that is because the number of needlepoint stores is declining, at least regionally in recent years. “We have Facebook groups with people from Maryland, Rhode Island, from far away. I had a visitor from Alabama the other day. She was dropping her son at Dartmouth and she made it a point to stop here on her way back home. It’s nice, you become a destination shop.”

The Internet has definitely made it easier for a niche store to thrive in a town like Wilton as the Enriched Stitch has done. “For a small business it’s very hard to survive if you’re just local. You could but you’re going to be struggling. Rents are expensive especially in Wilton. With the Internet, you set up an e-commerce website and it’s so much easier to reach people.”

Vallerie has discovered a nice community herself—of small businesses in the stores that have opened in the building surrounding her, just within the last year. Her neighbors include The Painted Cookie, AMG Catering, Dave’s Appliance and Everton Soccer. “The parking lot used to be empty and now it’s packed. It’s great!” she said, adding, “We have great landlords. I know other landlords are tougher, and rents in Wilton are high. But it’s much better than rents in New Canaan.”

Doing something you love that’s creative, helping people in a warm community atmosphere and making a successful business out of it certainly wears well on Vallerie. “Business is growing, we’re doing well. Everyday there’s somebody new who comes in, and everyday we’re doing something new here. I can’t complain.”