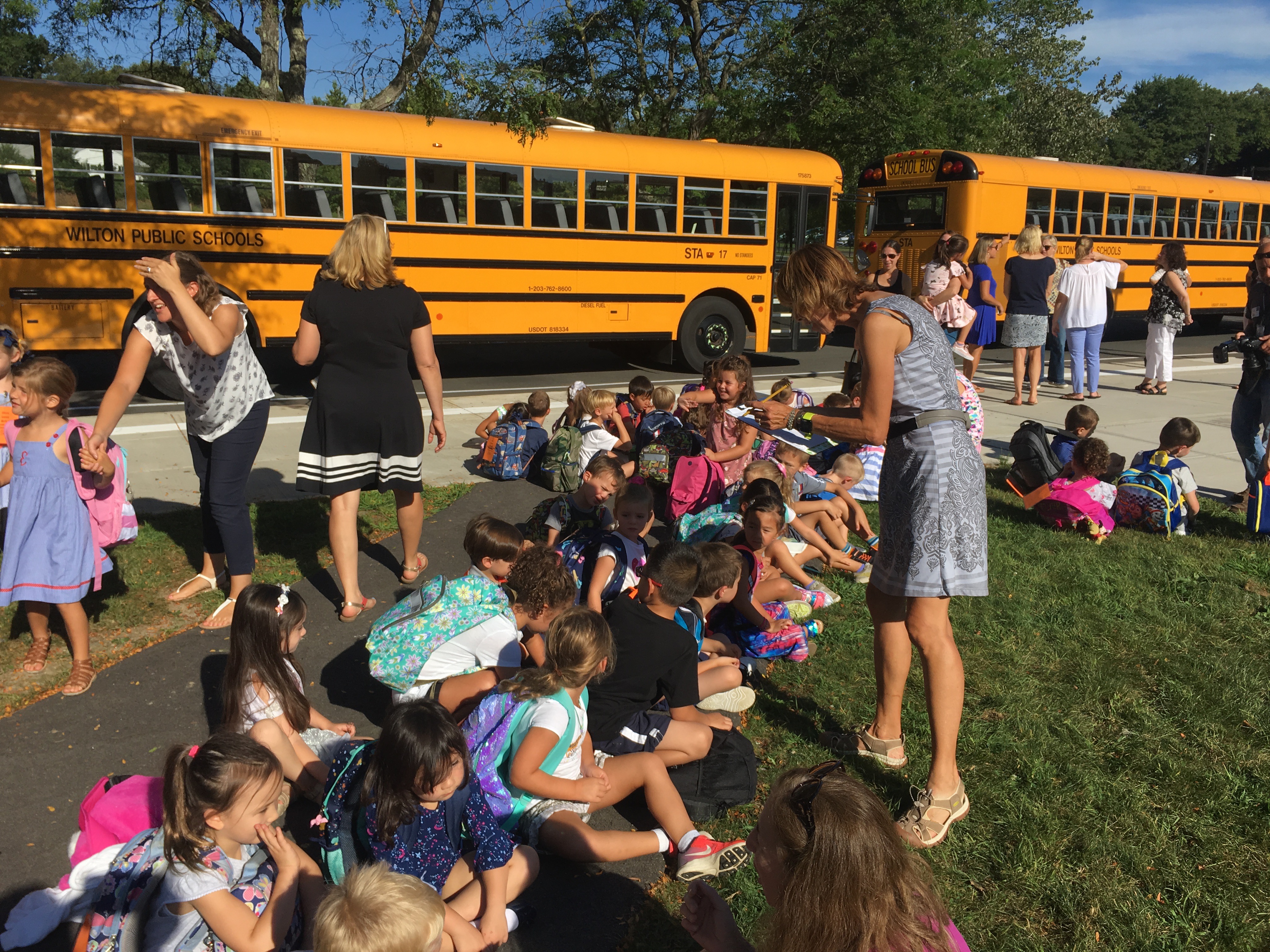 The 2019-2020 school year is just about to get underway and with it will come some exciting new opportunities for Wilton’s youngest learners. Miller-Driscoll Elementary School, which is the scholastic home of Wilton’s public school students in kindergarten, 1st grade and 2nd grade (as well as pre-K), will be piloting a new, multi-age educational component with the start of this year.

Historically, Miller-Driscoll has followed a traditional grade-level approach, with the different grades kept relatively separate. The new, multi-age approach involves bringing the students from classrooms in the three different grade levels together to incorporate shared learning opportunities across the age groups.

The idea grew out of a workshop that some of Wilton’s educators attended last year as part of the district’s participation in the Tri-State Consortium assessment program for high-performing districts. Based on the work of researchers Heidi Hayes Jacobs and Marie Alcock, who wrote Bold Moves for Schools, Miller-Driscoll administrators are building both learning and play-based opportunities for students in the three grades to participate in together.

“We’re going to do some things around building community, and looking for some different connections that we can make with the kids across grade levels. It’s in its infancy, but we’re very excited and the teachers doing it are so excited,” explains Miller-Driscoll principal Kathy Coon.

The school dipped a toe in the multi-age waters last year, exploring some activities on a very limited scale. As examples, Coon describes games the different age groups played together while waiting in their bus rooms at the end of the school day, multi-age recess periods and reading buddies.

“It was a way to have them get to know each other and look at ways that we can provide leadership opportunities even for our–I hate to call them older kids because they’re only 2nd grade–but our older kids that looked out for some of the younger kids,” she explains.

This year, the program will expand in two ‘cores’–the groups of classrooms around which the school is organized. Teachers were given the opportunity to volunteer in the program, and Coon says it was something more teachers wanted to do than could be accommodated in the pilot this year.

“One core will have two kindergarten classes, two first grade classes and two second grade classes; the other core will have three first and three second grade classrooms. We’re going to start there with opportunities to do some different things. So whether they’re teaming up to do some science and social studies. [Superintendent] Dr. Kevin Smith got us some furniture for each of our core areas throughout the whole school, so we’re going to do some things around that, like some core meetings to build community.”

Right off the bat, the approach will require some reorganization of classrooms, with the 12 participating classes relocating to multi-age cores. That means other teachers and classrooms not in the pilot will also switch locations this year. But Coon says there will be lots of benefits to students and teachers from trying the multi-age experience.

“First off it offers a ton of flexibility. Whether a kid needs a change of scenery, whether they need some support behaviorally, whether they need some support academically, all of those things I think we’ll be much better able to accommodate in a multi-age core,” she explains. “I also feel like a lot of the things that our students have already done–like first graders have already done all the science units in kindergarten, so how great for our first graders to be able to go down and talk to kindergarteners about when they built their ‘save the snowman structure,’ for example.”

The approach will also allow teachers to collaborate more with one another. “We’ve done a lot of training and professional development with grade level teams and there still will be an emphasis on grade level teams. But really examining the whole idea of vertical alignment and what was taught in kindergarten and then how do we build on that in first grade and how do we build on that and second and then what does that look like when the kids go on to Cider Mill,” says Coon.

Bold Moves in Play and Recess

The school is also looking at how it can make the learning environment stronger by restructuring how play and recess is built into the day. M-D students used to get a 25-minute lunch paired before or after with a 25-minute recess, supplemented with a 10-15 minute second ‘extra’ recess with teachers.

Now, while the lunch period will stay as 25 minutes, the kids will see distinct changes in their before and after breaks.

One period will be a 15-minute purposeful play time period supervised by cafeteria aides. The other will be a 30-minute recess overseen by classroom teachers–longer than in previous years, and extending the role teachers play in the process.

Purposeful play gives the students a variety of specific play options, including free play, ‘rough and tumble’ play, and organized play, all driven by things the kids themselves reported that they liked.

“Last year we did a survey with the kids, and so we added things like big Duplo blocks and big waffle blocks for building; we brought out some tables that had paper and board games and art materials, because we found that there are some kids where that big gross motor play–joining together and playing football or even climbing on the playground equipment–can be really intimidating for some kids and they prefer quiet play. We’re going to do a balance between those two things,” says Coon.

Longer recess grew out of a professional development session last year with Morgan Lecter Saxby, an expert in how children play. She talked about play cycles after the M-D teachers revealed that some students would come in from recess and still have trouble settling back in to learning.

“She said, ‘Well, some kids haven’t made it through their, their play cycle. There’s this whole routine that they go through.’ So we’re hoping that if we add on even a little bit of time, then we hope that they’ll be more available to come in and learn.”

Having the teachers be part of a longer recess is geared to giving them the ability to observe their students in all areas, and better understand how each of the kids operate.

“We also noticed last year the kids who were probably most successful at recess were the kids who had a plan before they got out there–they would return to what they were doing the day before. They were always the kids who played soccer or always played with the building blocks or whatever, versus some of the kids who didn’t have a plan and it took them a while to figure out what they wanted to do and then start playing–by the time they would, it was time to come in. So we’re hoping that with teachers observing that, then they can see, ‘Okay, maybe we need to have a conversation before we go out about what’s everybody’s plan, what does everybody want to do?’ Or if things go really well at recess time, say, ‘Wow. That went really well. What did we do that made it all work?’ Or if things didn’t go so well, ‘What do we need to do for our classroom community to make sure recess works for everybody?’”

Mindfulness will also enter into the Miller-Driscoll lexicon even more this year, with both teachers and students.

The school’s mental health staff has taught lessons in the classroom around mindfulness in the past. This year educators will build on that on the heels of the district’s adoption last year of the concept of RULER, a social and emotional learning system developed by the Yale Center for Emotional Intelligence focused on positive emotional climates and developing skills in both students and the adults. RULER is an acronym that stands for “recognizing, understanding, labeling, expressing and regulating emotions.”

“This year we’re going to start rolling some of those tools with the kids related to mindfulness–how do you want to feel in your classroom environment, what are you going to do to help people feel that way? A lot of our staff have had quite a bit of training in zones of regulation, which is all about knowing how is your body doing, how is your body feeling? The mood right now to match the tasks that you need to complete–if it doesn’t match, what might be some strategies, so if you’re all revved up but you’re being asked to sit quietly and do some writing, what are some strategies we can use to calm your body and your mind a little bit? And vice versa–if you’re kind of down, but we’re asking you to do a more active thing, then what do you do to get your body moving? All of those things are all related and incorporate that mindfulness piece,” Coon explains.

Mindfulness also has a physical presence in the school, thanks to a former student who has now moved on to Cider Mill, who wanted to introduce a place for students to better access mindfulness. She wrote a grant request to the PTA to create a ‘calming corner’ for students and also led the teachers in some activities they can do with their students.

“It’s a small room that has some sensory activities and choices in there–it has this really cute little chair that you can sit in and kind of pull a little cover over you so you literally feel like you’re in an egg. It’s just another option for kids who might need to take a quiet moment. She also did a professional development with the teachers where they made glitter mindfulness bottles–you shake them and just take a quiet moment and watch the glitter fall to the bottom, and they all made peace rocks. So the teachers [learned] to do those kinds of things in classes with their kids,” Coon describes.

One other new feature parents and students will find this year at M-D is a new Post Office. First grade teacher Scott Dempsey created an idea for an after school student club centered around mail.

“Over the summer he built a beautiful mailbox that we now have in our foyer and there’ll be mailboxes outside of each teacher’s classroom. Parents will be able to send letters in, kids will be able to write letters to other students or to teachers. That’s something extra that he’s doing, above and beyond.” 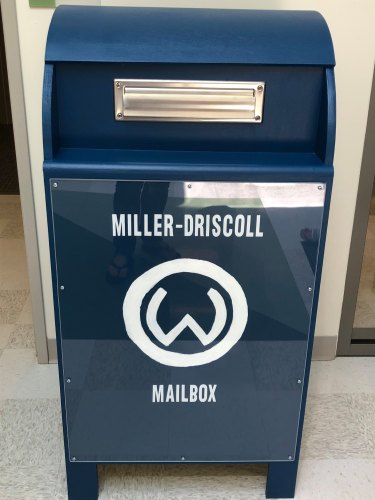