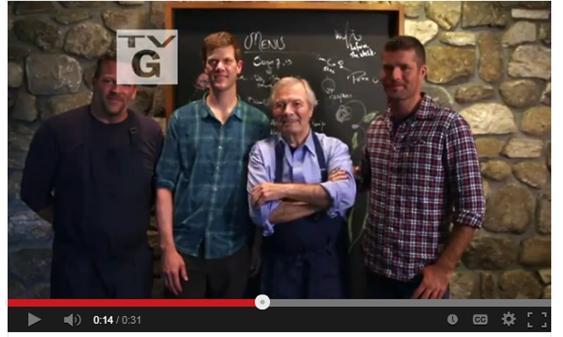 Wilton’s Millstone Farm and Tim LaBant of the Schoolhouse Restaurant are featured front and center next to food legend Jacques Pepin in a new TV series, “Moveable Feast with Fine Cooking.” Westport’s Bill Taibe (of leFarm and The Whelk) is also part of the episode.

GOOD Morning Wilton tracked down this clip, below, promo-ing the episode, one that follows the series’ theme of having notable chefs “pop-up” spontaneous feasts in unusual locations across America.

Some guest chefs that will appear in other episodes include Marcus Samuelsson, Anita Lo, Larry and Marc Forgione, Jonathan Waxman, Andy Ricker, Jeffrey Saad, and more. The show is hosted by Australia’s celebrity chef Pete Evans and is produced by WGBH and Fine Cooking magazine.

In the show, the chefs are asked to demonstrate their farm-to-table cooking methods, as viewers follow them to source the finest local ingredients for their dishes. Afterwards, the food pros join forces and work against the clock to prepare a multi-course menu for an eclectic, enthusiastic, and ravenous group of diners. Viewers will learn from the participants firsthand what ingredients inspire their cooking perspective and the local food treasures and experiences that best exemplify their home cities.