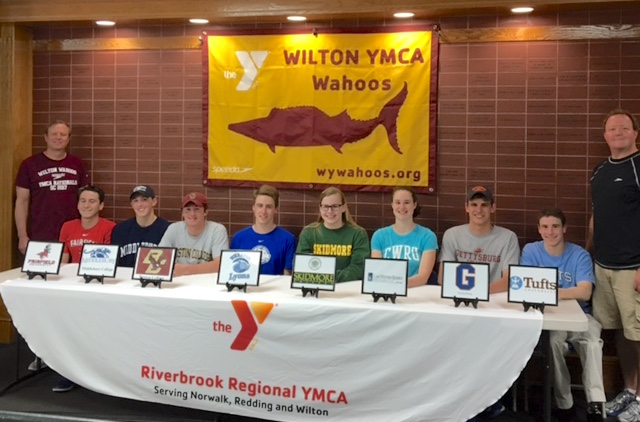 With high school graduations taking place this month, several Wilton athletes have announced which schools they’ve committed to attend next fall and continue their athletic careers.

A total of 19 Wilton Family YMCA Wahoo swimmers will compete in college at Division I and Division III schools next year. Fairfield Prep senior Evan Titus has committed to St. Bonaventure University to play Division I rugby as he begins his college career in the fall of 2017. Titus will study business and marketing as well as participate in the Pacioli Scholars Program at St. Bonaventure, a program that focuses on community service and one which will allow him to elaborate on his service work at Prep. Titus has devoted his service energies to assisting special needs children at the New Canaan YMCA for the past two years, and has earned an additional scholarship for his willingness to participate in the service program at St. Bonaventure.

During his time as an athlete a Prep, Titus has played four years of rugby and wrestling as well as three years of football. In rugby he is a senior captain as well as the 2017 Northeast Jesuit Rugby Tournament MVP. On the wrestling mat Titus also captained the team as well as achieved All-State and All-SCC honors. A consistent hard worker in the classroom, Titus has managed Prep’s strong college preparatory course of studies while pursuing his talent in choral music by his participation in Prep’s Men’s Select Choir for four years. Titus is a resident of Wilton.