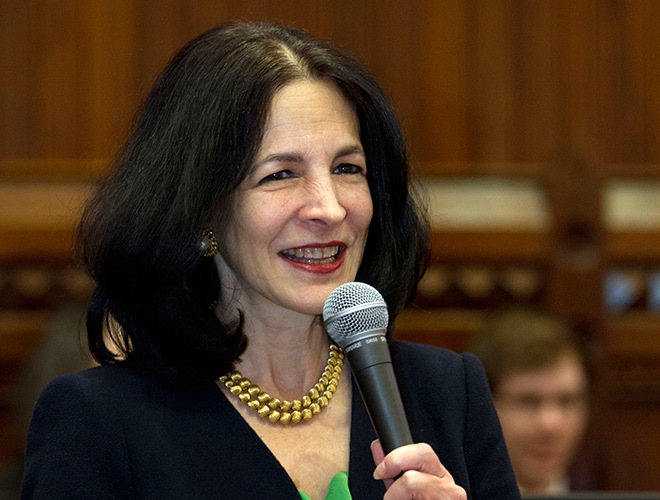 The following article was adapted from an announcement on Rep. Lavielle’s website.

On Tuesday, Wilton’s State Representative Gail Lavielle was appointed by House Republican Leader Rep. Themis Klarides as Ranking Member of the General Assembly’s joint Appropriations Committee, a role she will assume when the 2019 session opens on Jan. 9. The appointment makes her the top Republican on the committee responsible drafting the biennial budget, which is approximately $40 billion.

Lavielle, an Assistant Minority Leader, will be sworn in for her fifth term in the state House in January. In the past she served three terms on the Appropriations Committee, where she was Ranking Member of the Transportation Subcommittee. She has experience leading a large, prominent committee, having served for two terms as Ranking Member of the Education Committee. As a member of the Finance, Revenue, and Bonding Committee, she has worked on the revenue side of the state budget as well.

For the coming session, Lavielle also will maintain her memberships on the Education and Transportation Committees as well.

The Appropriations Committee is the largest committee in the state legislature, and is responsible for determining funding for the state’s departments and agencies. The committee also deals with state employee salaries and pensions–the state’s largest fixed cost. For years, Connecticut has run large deficits, most recently surpassing $5 billion. Due to the difficulties of resolving the massive shortfall, the legislature missed its June 30, 2017 deadline and did not resolve the situation until late October of that year.

State employee pensions are an issue of particular interest in Wilton, with the possibility of a proposed “push-down” of teacher pension costs to municipalities being floated in Hartford. It’s something Lavielle has worked to prevent, as well as focusing on making the state education funding formula more predictable.

“I am honored to take on this new leadership role, and I am grateful to Republican Leader Klarides for the appointment,” Lavielle said, following the announcement at the Capitol. “The gravity and depth of Connecticut’s fiscal crisis cannot be overstated, and no matter how you view the situation, it is clear that real structural, long-lasting changes in the management of the state’s finances will be necessary to restore Connecticut’s economy. During this session, we must of course be attentive to the many non-financial issues that are important to the state’s residents, but at the same time, we must be laser-focused on the serious financial problems that affect the state’s ability to implement and enforce good policies in every area. Together with my caucus, I am confident that we will continue to offer workable proposals to reduce spending, improve the business climate and grow the tax base, reduce taxes as spending cuts and revenue growth permit, and invest intelligently in infrastructure, education, and essential social services.”

Although the state is expected to finish the year with a surplus Lavielle’s announcement described as “relatively small,” the projected deficit, beginning July, 2019, indicates continuing challenges ahead for the state. Lavielle offered hope that there will be bipartisan cooperation to address solutions.

“With a new administration come new opportunities, and I hope that our new governor will be open to ideas from both sides of the political aisle,” she said. “The legislature does its best work when everyone moves past politics and works together. For the last four years, I have enjoyed an excellent relationship with my Democratic counterparts in Education Committee leadership that allowed us to accomplish much together for the state. I would welcome the same kind of relationship with my counterparts on the Appropriations Committee, and I hope that we will be successful in working together to improve Connecticut’s finances and economy.”

While Ranking Member of the Education Committee, Lavielle authored the first comprehensive education mandate relief bill passed in years. Her announcement includes a pledge to “continue to advocate for more equitable funding for Norwalk’s schools, better career and college preparation for students, school safety for students, teachers, and staff, and restoring the solvency of the teachers’ retirement and healthcare funds.” The Education Committee oversees the Department of Education, local and regional boards of education, and legal matters pertaining to unionized teachers.

A longtime member of the Transportation Committee, Lavielle (according to the announcement), “…will continue to advocate for improvements to Metro-North, more cost-effective spending on infrastructure, better access to electric vehicles and construction of the infrastructure necessary to serve them, and a more efficient DMV.” The committee oversees the Department of Transportation, including highways and bridges, navigation, aeronautics, mass transit and railroads, and also has cognizance of all matters pertaining to the State Traffic Commission and the Department of Motor Vehicles.

Prior to serving in government, Lavielle worked for more than 25 years in finance, marketing, and communication, holding executive leadership positions in both the United States and France with Fortune 500 companies. She was Chief Executive of a subsidiary of the Interpublic Group and a Senior Vice President of Suez Environnement, the leading international water and wastewater services company. Before her election to the legislature, she served on the Wilton Board of Finance and Energy Commission. In addition to an MA from Yale and a BA from Cornell, she holds an MBA in Finance from UConn. She and her husband live in Wilton.

The General Assembly will convene on January 9, 2019 for a five-month session that will end at midnight on June 5. In odd-numbered years, legislators must vote on a biennial state budget, which they must pass before they adjourn.