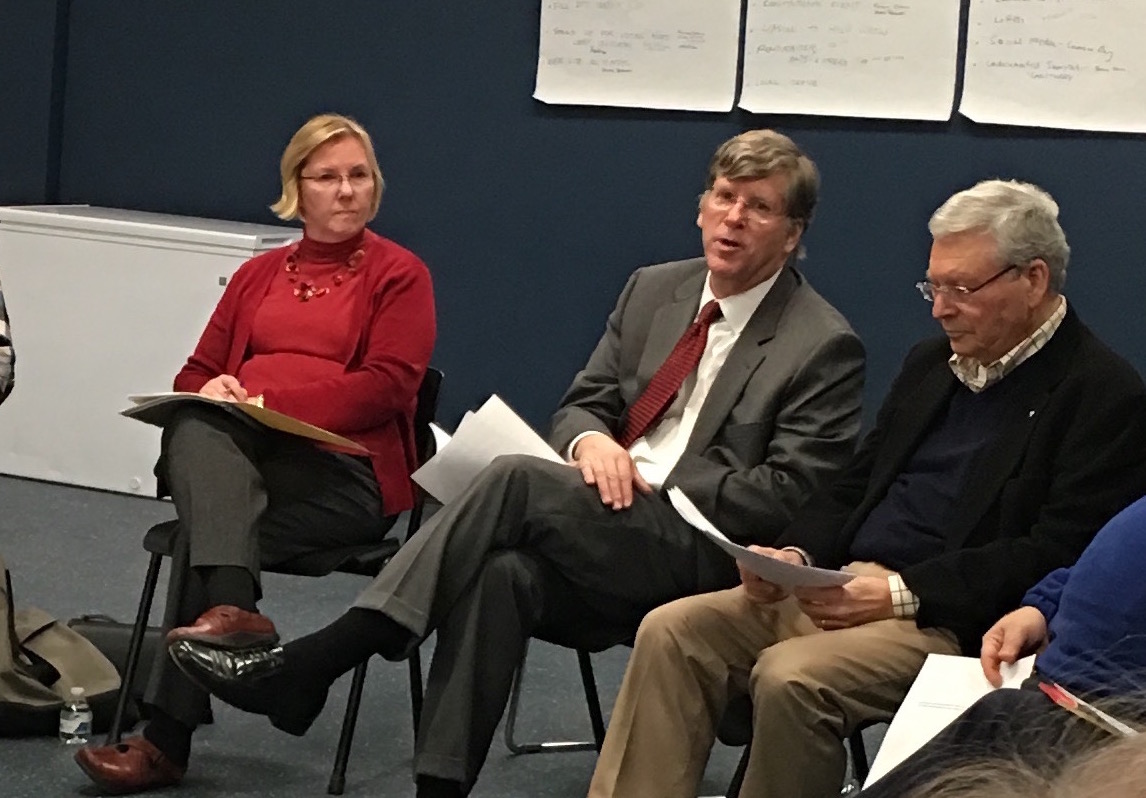 Last Tuesday evening, Jan. 3, the Wilton Democratic Town Committee (DTC) held its monthly meeting in a new location, Comstock Community Center. It was the second monthly meeting the DTC members have held in Comstock’s multipurpose room since moving from the much smaller Town Hall Annex, reflecting the increased attendance they’ve had following November’s election:  December’s meeting saw a packed room with approximately 60-70 attendees, and January’s gathering of 25-30 people was still larger than the DTC’s typical draw.

One other detail at this month’s meeting was different as well–namely, the presence of one non-Democrat. The guest speaker on Tuesday was Michael Kaelin, Wilton’s second selectman. The visit had the added frisson of interest given that Kaelin, a long-time member of the GOP and former chair of Wilton’s Republican Town Committee, recently let it be known that he had changed his affiliation from Republican to unaffiliated.

[Editor’s Note:  GOOD Morning Wilton will feature a lengthy Q&A with Michael Kaelin on Monday with some very candid, interesting thoughts from the town official.]

Kaelin told the DTC membership that he was interested in attending their meeting because while there may be one sole Democrat who sits on the 5-member Board of Selectmen, “You do have a representative on the BoS, you actually have five representatives on the BoS,” and that he was “more interested in finding out what your concerns are rather than communicating what’s going on the BOS.”

He also said he was inspired to come speak with the DTC after attending the DTC fundraiser last summer. “I really learned a lot about what your specific concerns were. I concluded from that it would be a good idea for me to come here.”

Kaelin also broke the ice by saying, “If you’re concerned I’m some kind of mole here sent to spy, I’m really not interested in taking part in partisan politics.”

Kaelin stayed for the entire hour-plus long meeting and spoke for about half of it; he talked about what he saw as the pressing issues facing the town and the BoS and then took questions from the group.

Among the highlights of his comments:

We’ll have much more in our exclusive interview with Kaelin Monday.