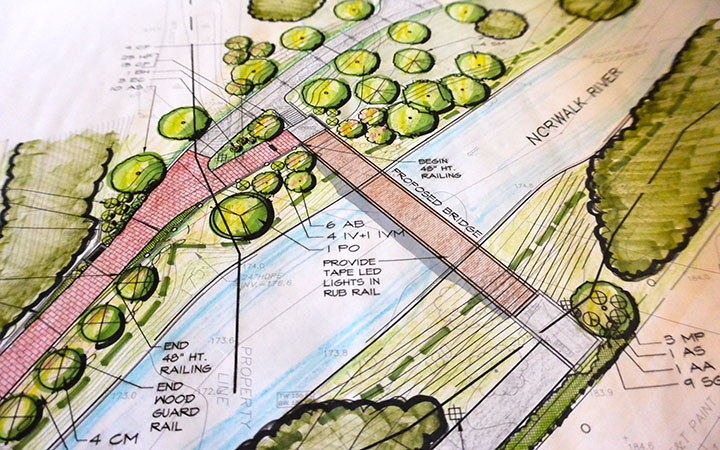 Wilton is one step closer to getting its pedestrian bridge. The project–to build a walkway spanning the Norwalk River and directly connect the Wilton train station with Wilton Center–received approval from the CT Department of Transportation (C-DOT) to put the project out to bid.

First selectman Lynne Vanderslice says she received the good news in a letter on Tuesday, July 11, authorizing town officials to advertise an RFP (request for proposal) and solicit construction bids. The approval came after Wilton officials asked for permission to advertise.

“We submitted an ad [Wednesday] which will run in [Thursday’s] Norwalk Hour,” Vanderslice says.

The approval to bid out the bridge project doesn’t mean the project is officially a ‘go.’ Before any construction can begin, the town still needs to receive three permits/approvals–an Army Corps of Engineers permit, a C-DOT encroachment permit, and Metro-North entry permitting requirements.

However, Vanderslice says that approval to do the RFP is a “very, very positive” sign that the town is close to being able to get the project underway.

“I don’t think that this would have been authorized if they weren’t really comfortable at the DOT that everything was properly done for the permitting,” Vanderslice adds. “It’s good news. It’s an indication that this is very, very likely moving forward. I know residents have been frustrated and have questioned whether this is ever even a possibility, based on how long this has taken. This is a clear indicator that this is going to be a reality.”

Vanderslice wouldn’t say exactly when she expects shovels in the ground. The minimum time for the RFP bidding process is 21-days, and she says, “We still have to wait for the additional approvals before we would be able to proceed and accept a bidder.”

Once it does start, construction isn’t expected to take very long, because the bridge itself is prefabricated. The work is seasonal however, says Vanderslice. “There’s a limited time period during the year when this can get done, and depends on the water levels of the river.”

The bridge project received its final municipal sign-off when the Planning and Zoning Commission gave its unanimous endorsement at the commission’s June 26 meeting.

Currently, to get from Wilton Station to Wilton Center, pedestrians must walk a circuitous, mile-long route up steeply sloped roadways and a heavily travelled section of Routes 7 and 33. The bridge would shorten that walk to a mere 500 feet.

Vanderslice credits Wilton’s state representative, Gail Lavielle, with helping the town secure the C-DOT approval. “Without her help we would not be at this point. Gail continued to monitor and follow up on this,” she says, adding thanks to C-DOT commissioner Jim Redeker, who visited Wilton in April and met with Lavielle and Vanderslice.

Lavielle was similarly very encouraged by the news.

“Anytime a project involves state or federal funding, the permitting process can be very long, and Lynne and her staff have been working hard to complete all the administrative tasks. It’s wonderful news that Wilton can get going with soliciting bids for the bridge, and it means that the remaining permits are viewed as imminent. I’m very much looking forward to seeing the bridge built. It’s the last piece we need for a real transit-oriented development area in town, where housing, retail, offices, restaurants, and open space are all linked together by a safe and easily walkable route. This will add a welcome new dimension to our town center,” she says.

The project has been in the works since being introduced in 2007, and eventually received a $500,000 Small Town Economic Assistance Program (STEAP) grant in 2014. Completed design plans were submitted to C-DOT in June 2016, and needed sign off from multiple state agencies and offices. The process has taken longer than expected–and has caused some frustration among residents and town officials alike.

“We went through the proper process of engaging a designer. That process is cumbersome,” says town planner Robert Nerney. “We’ve been in communication with the DOT, expressing our concern. We’ve been told that these projects routinely go beyond the required completion dates.”

Technically, the town has a September 2017 deadline to use those funds and complete the project–or risk having to return the money. However, both Nerney and Vanderslice says it’s highly unlikely that C-DOT will hold the town to that deadline.

“The state DOT does allow you to file an application and request an extension, and they’ve indicated to us that the substantial majority of these projects, because of the time they take, usually require asking for an extension. If we have to ask, we anticipate that we’d receive a positive response,” Vanderslice says.