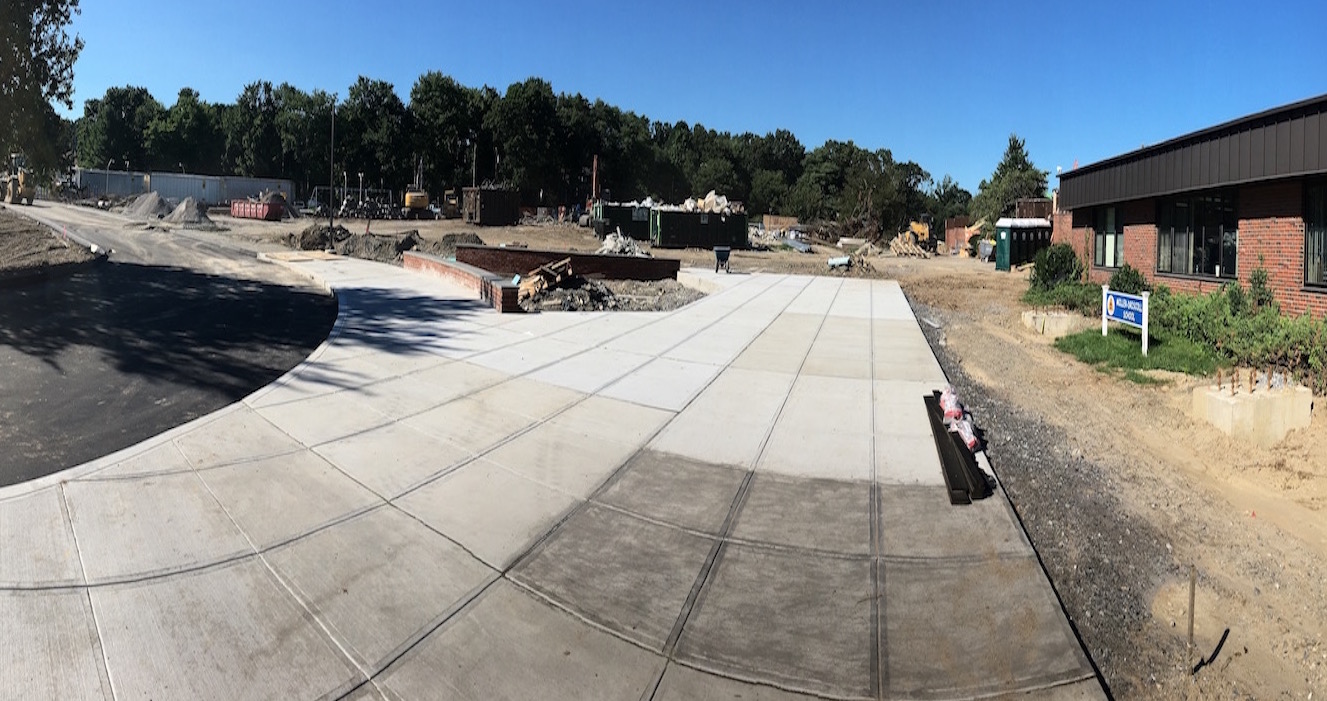 Mike Douyard is pretty stressed. The Turner Construction project manager overseeing the Miller-Driscoll School renovation has a hard and fast deadline to complete the current stage of the project. Movers show up tomorrow, Thursday, Aug. 25, to start moving things back into the building. Teachers are scheduled to return to start setting up classrooms on Tuesday, Aug. 30, and parents and students will be coming in two days later on Thursday, Sept. 1 for Meet the Teacher Day. Of course, school starts Tuesday, Sept. 6.

There’s still a lot of work left to be done, and not a lot of time in which to complete it. No wonder Douyard is stressed.

“We’re seven days a week right now, two shifts,” he says, “For another week, at least.”

Despite the ticking clock, it’s evident that the project has progressed a lot over the summer work period. All told, the 200 construction workers who have worked on the job since June 16 have completed approximately $11 million dollars worth of work just in June, July and August alone, according to Douyard. It was remarkable to see the difference between the two tours of the school that GOOD Morning Wilton was given, the first on July 28 and another yesterday, Tuesday, Aug. 23.

Also along on Tuesday’s tour were Wilton’s first selectman Lynne Vanderslice and Chris Burney, the town’s director of facilities and energy management. Vanderslice was impressed with how far along the project is and how things look. But both she and Burney were somewhat apprehensive about how parents are going to react when they see the school for the first time since the last day of school on June 15. The bulk of the work that was done over the summer is primarily in areas the public can’t yet access–namely the new addition in the rear of the building; the new preschool wing and entrance; the paved access road in the back; and significant re-grading and terrain changes in the rear of the school.

There have been some cosmetic and structural changes in the current building, especially on the Miller side, with new doors, ceilings, flooring and walls painted and extended into the ceiling deck to meet fire code. Of course, the former preschool core and North cafeteria have been demolished, so the front profile of the school is obviously changed. The front bus loop is different too, with new curbing and new landscaping to replace what was torn up over the summer. But the layout of the classrooms in the remaining buildings are essentially the same as last year.

“With upgrades,” Douyard reminds everyone. “Nice new walls, nice new ceilings, new flooring and carpeting. It’s all new windows, a new mechanical system, all new sprinkler system–you never had a sprinkler system in here before. All new lights.” In other words, many of the changes won’t be obvious to the eye.

Parents also should realize that the planned renovation to the front office and the Driscoll side of the building won’t happen until next summer. That’s the way the project has been planned from the beginning. The campus will still be a construction site through the school year; construction areas will be fenced off and well separated from the parts of the school occupied by students, just as it was last year, although most of the large construction vehicles will actually be gone. Town officials want to make sure that parents and residents aren’t misunderstanding the schedule:  the entire project isn’t scheduled to be totally complete until the start of the 2017-2018 school year in Sept. 2017.

The new addition will not be ready to be open to students until at least mid-to-late October of this year. That includes the preschool wing and the new cafeteria. But it’s clear to see progress is being made even in this new structure, with many walls up and painted and the flooring completed in some sections.

The existing, Driscoll cafeteria and kitchen is one area that looks almost ready to accept students. The kitchen is clean and there’s new equipment that was brought over from the old Miller cafeteria. It’s completely operable and will be ready to start on day one, servicing all the children in the school’s lunch periods. This kitchen will keep serving lunches until the new cafeteria comes on line in October. Once that happens, the old cafeteria eventually will become a multipurpose room complete with a stage.

Speaking of getting things clean and ready for students, the maintenance staff, led by Willie DeHostas, is already at work making order where they can. They’re working alongside the crews working on indoor air quality and cleaning. In various spots, there are negative air machines, filtering and circulating the air in classrooms. There are also school chairs and supplies and other classroom items sitting in hallways and corners, just waiting to get put back in the right places. It seems daunting to think about the amount of sweat equity that it will take to get everything ready in time for next week.

Despite the fact that there’s still a good chunk of work remaining, Vanderslice sees promise underneath the chaotic appearance. She says she hopes to put any people’s fears to rest.  “It looks good,” she says, adding, “People don’t need to worry. Parents don’t need to worry.”