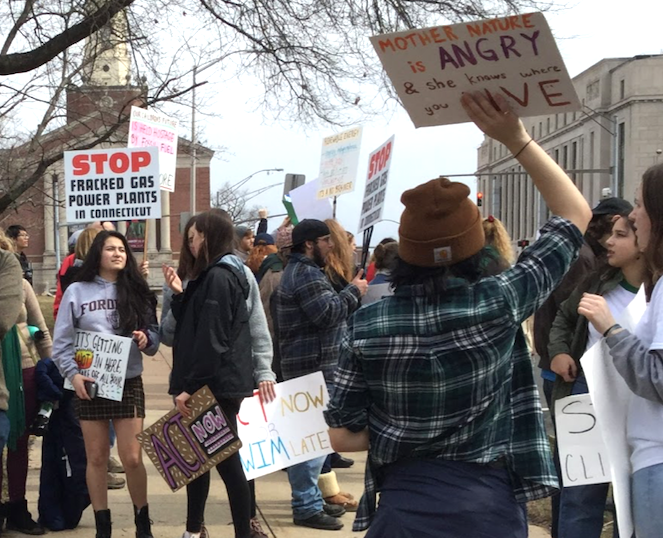 This past Friday, March 15, I joined over one million people around the planet in the largest climate protest in history. The vast majority of these one million people were students, most of whom were striking from school. For me, the climate strike coincidentally landed on the pre-established senior skip day, so I was lucky enough to miss only one extraneous day of school. But for many other students around the world, this was a purposeful act of resistance. A statement was being made:  The adults in power aren’t doing anything to counteract climate change, so now we will.

This movement was started by Swedish activist Greta Thunberg, a 16-year-old student who began skipping school last August to protest outside the Swedish Parliament to reduce carbon emissions. Since then, she has skipped school every Friday and is now joined by thousands of students not just in Stockholm, but around Europe for #FridaysForFuture protests. I encourage all of you to listen to her TedTalk and her address to the United Nations Climate Change Conference, where she described much of her motivation and essentially begged the United Nations to do something. This has become a theme of this movement–youth being forced to beg world leadership to take bold action. The Intergovernmental Panel on Climate Change report conducted by the United Nations created an apocalyptic 12-year timeframe before the effects of climate change become irreversible and literally earth-changing. The debate about climate change shouldn’t be questioning its existence. This has nothing to do with politics, or liberal people vs. conservative people–a point that I hope is made clear by the fact that students from South Africa to Australia to Paris were striking. If there should be any debate, it should be surrounding the most effective way to take action. Yet, the sense of urgency that many young people feel regarding this apocalyptic deadline is completely absent in the lawmakers and leaders that govern our world. But why?

It’s understandable to some degree; the consequences of climate change are easily rationalized out of an individual consciousness with assurances like, “I’ll be dead by then.” But in 12 years I’ll be 29, with hopefully most of my life ahead of me. How old will you be?

I was an organizer for the climate strike taking place in Hartford, a small drop in the ocean of climate strikes taking place around the world. We had speakers, from local environmentalists and legislators, who discussed not only the urgency of climate change but how environmental policy disproportionately harms marginalized, poor, and non-white communities. We then marched around the capitol building, protested on the street, and briefly met with members of the Energy and Technology committee on the state legislature. When asked what they were doing to help the environment by a room of over 50 people, they delivered an unenthused response about how green policy is hard to accomplish within their budget. This epitomizes the massive disconnect that young people sense between ourselves and the generations before us. It’s the disconnect that is forcing us out of our classrooms and onto the streets. Why should money matter when the fate of the earth itself is threatened? We are undergoing the sixth mass extinction on earth. These are circumstances that no civilization has ever faced before. The rulebook that we’ve been operating on for all of history needs to be thrown out in favor of one that ensures the survival of our planet. There is no alternative.

Striking and organizing with a group of smart, passionate, and skilled peers in Hartford and around the world was an exciting experience, but one that I would prefer never to have had. Hearing older generations using rhetoric like, “the younger generation will save us,” and, “seeing this generation gives me hope,” is nothing but a cop-out. It shouldn’t come to students having to leave school to beg their governments to save the planet.

The generations who created this crisis and perpetuated it for the sake of personal wealth have to take action to stop it. There is no time for willful ignorance or a lack of personal responsibility. By the time my generation is in charge, it’ll be too late. Hold yourself accountable for your lifestyle and hold your representatives accountable for their lack of policy. Email, call, and write your state legislators and ask them to prioritize climate policy.

For your convenience, here is a list of specific bills you can ask your state representatives to support:

The story shouldn’t be, as I’m too often seeing in major media headlines, that it’s so amazing how young people can organize on this mass level. It’s frankly patronizing. Young people have been at the forefront of every movement throughout history, whether it be gun control, black lives matter, free speech, anti-war, or the civil rights movement. The headline should center around how ruined our system is that students are forced to spend their time protesting and begging in the streets for their governments to take climate change action instead of being in class where we should be. The people of Wilton have the education, wealth, and connections to make real positive impacts. Personal and representative accountability is key. Our next strike is on May 3. It’s time to get serious.

The author is a senior at Wilton High School.