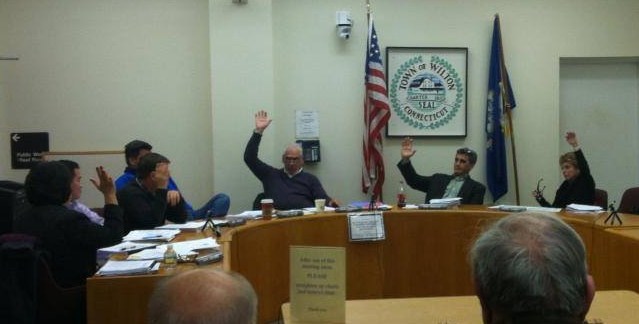 After several sessions and contentious public hearings over the last several months, Wilton’s Planning & Zoning Commission finally issued a decision on the application to amend town regulations in order to permit lighting up to 80 ft. high at athletic fields. The vote at last night’s meeting of the P&Z commission was to approve a resolution denying the application, and the commissioners voted 5-2 to say “no” to the lights.

The unusual vote meant that a vote in favor of the resolution was actually a vote against the lights.

The commissioners who voted in favor of the resolution to deny the lighting ordinance change were Michael Rudolph (chairman), Lori Bufano, John Wilson, Doris Knapp and Bas Nabulsi. The two officials who voted against the resolution (in other words, they were for the lights) were Christopher Hulse (vice chair) and Peter Shiue.

The proposed turf field is still in front of other town boards, so this vote doesn’t halt the possibility of a new athletic field at Middlebrook School outright. There is still a potential debate in front of the Inland Wetlands Commission to get approval on the water drainage systems proposed by the engineers and landscape architects. As well, the same lighting issue that P&Z considered is also in front of the Zoning Board of Appeals. In 2012, that board approved a previous application for a variance to allow lights above 70 ft. That decision was appealed in the courts, and it was recently remanded back to the ZBA to make “findings of fact” to support their original decision. The ZBA did that last week.

Majority of P&Z commissioners’ did not support the proposal

In the discussion leading up to the P&Z vote Monday evening, the commissioners debated their takeaway from testimony presented over the course of several hearings, by the side petitioning to change the ordinance and allow the lights. Several times they referred to whether or not they agreed with the lighting experts called by Casey Healy, the attorney from Gregory and Adams, who was retained by Wilton Youth Football, Wilton Youth Lacrosse and Wilton Youth Field Hockey Associations to get the regulation amended.

From the outset of last night’s meeting, it seemed clear that the majority of the P&Z commissioners present did not support the proposal.

[Editor’s Note: Planning & Zoning staff, led by Bob Nerney, Wilton’s town planner, had prepared drafts of resolutions to support and to deny the proposal in advance of the meeting, and while the commissioners wound up amending the eventual resolution to deny, it will be made available to press and to the public after GOOD Morning Wilton‘s publication deadline. GMW.com will update the story with the official resolution as soon as it is available.]

Several commissioners acknowledged their support for the need for athletic fields and improved facilities for Wilton’s young athletes. Nabulsi was one who expressed this opinion when he stated he was “leaning toward denial” prior to the vote:

Rudolph, the commission’s chairman, agreed: “I was very much impressed by the fact that there were double income parents that don’t get home until 5 or 6 o’clock at night and need the advantage of lighting to have their children participate in athletics throughout the community.”

It seemed that they were searching for some justification to compromise on the heights of the lights, and they were sympathetic with the impact such lighting might have on neighbors who live in areas surrounding athletic fields and who might be affected by seeing the lights.

Wilson addressed that from a personal perspective: “I was very affected by a comment made by the lighting expert for the applicant that said there will be uplighting, and that bothered me, that bothered me a lot. I’m also very affected by fog, smog, any of that sort of thing, it will put a dome of light over that entire area. I know what that’s like because I have it at my house, so I’m affected by that all the time. So I’m very sympathetic to the neighborhood that will be affected by this. At the same time, I really think the town needs a turf field in addition to the ones that we have and I support that wholeheartedly.”

Speaking in defense of allowing higher lights, Hulse cited the expertise of the lighting professional who testified on behalf of the athletic groups. “In his 35 years of doing it, he was the recommendation, of everything he’s ever done, 70 to 80 feet is what it is. In this guy’s 35 year, of the thousands of properties he’s done, 70 to 80 feet is kinda what it is. So, I would lean toward approval.”

Hulse also noted that the new ordinance wording would only permit lights up to 80 feet [emphasis added by GMW] and not make it a universal edict for all fields.

“Each field still would have to be individually applied for. It’s not a blank check for lights across all the fields. Whether it’s Middlebrook or another soccer field, they’d still have to come up with the merits of why the lights need to be there,” Hulse said.

What seemed to weigh heaviest on many of the commissioners, however, and what seemed to sound the death nell for the proposed lighting amendment, was that the commissioners didn’t feel there was enough evidence to support specific and consistent light heights as they related to individual sports. It was mentioned that it wasn’t made “clear enough to make an intelligent decision.” As there could be no outlined height limit or defined matrix to determine how to apply the regulation for light heights across different sports, , the commissioners felt that such legislative change wasn’t warranted or prudent.

“This paints with a much broader brush which I think is perhaps not in the best interest of the town,” Nabulsi said, suggesting the better route for such applicants would be the Zoning Board of Appeals, for “variances on a case-by-case basis.”

Nabulsi was consistent in his worry for the impact of the lights on the wider community, not just immediate neighbors. ”

At 80 feet the potential for a larger percentage of the town to be impacted is significantly higher, both from the aura of the light and the direct visibility of the stanchions and the lights themselves.”

Nerney, the town planner, suggested that the commission recommend that the town examine the issue more fully with a larger group of specialists, perhaps by putting together a special  committee. He thought representatives from Parks & Recreation, the schools, Inland Wetlands and others as well as outside expertise would be good options for such a “blue ribbon panel.”

Wilton residents Woodson and Christine Duncan were both very vocal in their opposition to the proposed lighting changes during the hearings. They were satisfied with the outcome of last night’s vote.

“I’m pleased that they listened,” Christine said. “It is going to affect a lot of people if you light up the bowl that is Middlebrook. While some people move here for sports, other people move here for views and dark skies, and everybody needs to be considered. It seemed at first maybe we weren’t going to be heard, but I’m pleased that they obviously listened very carefully– ”

“…the majority of the board really listened and I think they made the right decision.” she finished.

Anthony LoFrisco was somewhat the outspoken ad hoc chair of the group opposed to the lights, even starting a group he called “The Committee to Preserve Wilton’s Character“ (complete with Facebook page and website). He was often in the spotlight with dramatic appearances before the P&Z board, and he stayed on message in his comments after last evening’s vote.

“I’m glad it came out the way it did, obviously, so that the town preserves its character. That’s what I was really interested in. Without 80 ft. lights, it will retain its character. Common sense prevailed.”

GOOD Morning Wilton asked Healy for a comment following the meeting, but he declined.