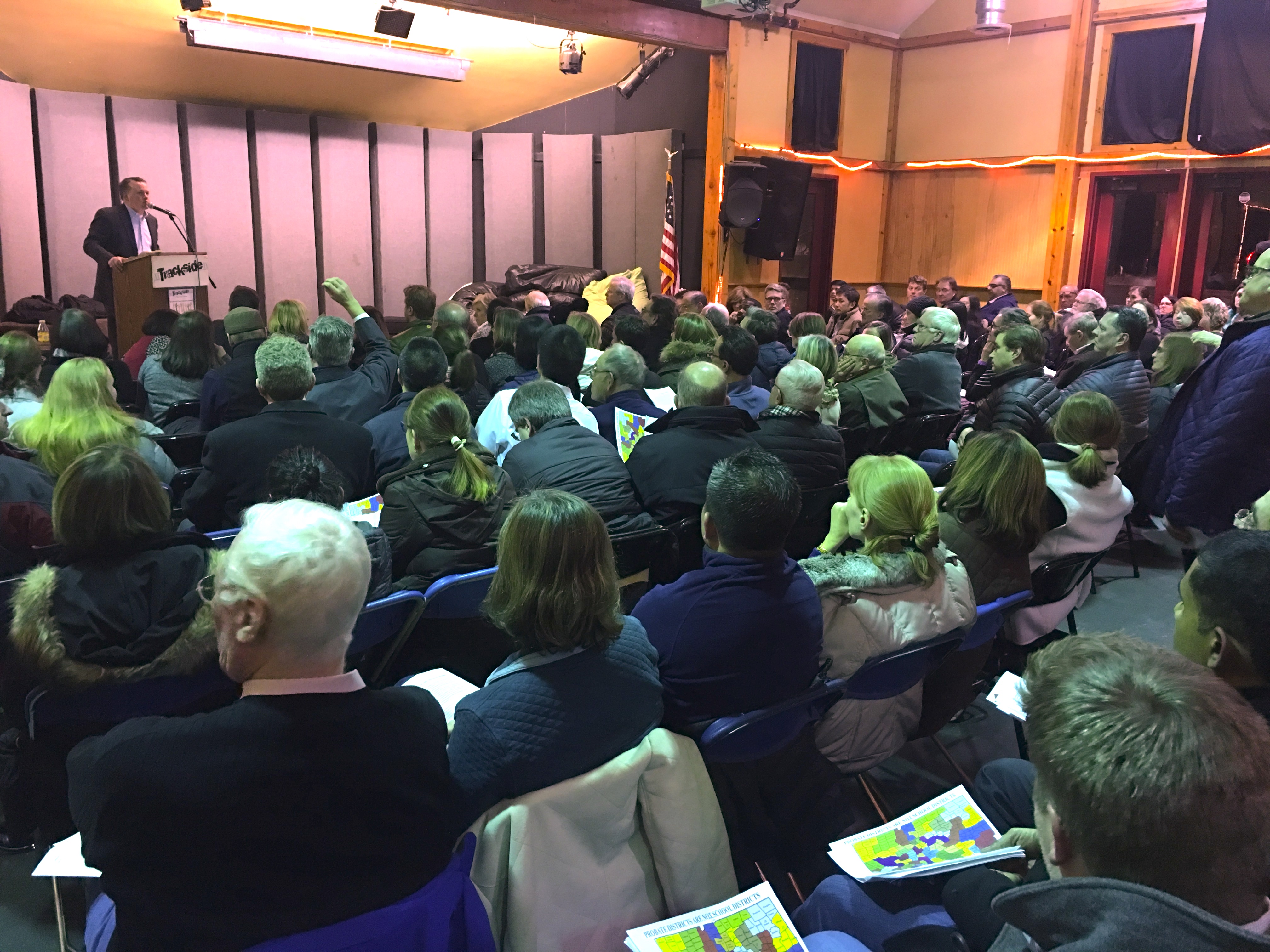 Wilton residents up in arms over a state bill proposing regionalizing school districts have formed “Protect Wilton Schools,” to organize efforts to try to stop the bill completely. At a meeting Thursday night attended by more than 200 people, organizers provided information about the legislative process and the plans they’ve started building to coordinate opposition.

The effort to defeat the bill was organized by the Wilton Republican Town Committee, led by RTC chair Bill Lalor. While the RTC started the group, Lalor was specific that the effort needed to be bi-partisan, saying, “I’ve never seen the unity we’re seeing.” At one point in the meeting he called up Wilton Democratic Town Committee chair Tom Dubin to speak to the crowd in order to emphasize that, saying, “Tom’s a very gracious guy.”

Wilton’s Board of Education was holding their previously scheduled meeting at the same time as well. Earlier, Chair Christine Finkelstein had released a statement vowing to fight the “awful, horrible idea,” and Superintendent Kevin Smith had released a similarly strongly-worded letter that he had sent to legislators in Hartford. Finkelstein expressed that the BOE and school officials would have attended the Protect Wilton Schools meeting if they didn’t have theirs already scheduled.

The Protect Wilton Schools meeting lasted two hours. There was a lot covered. We’re going to do our best to summarize the key points, as several things happened and salient points were made:

“This is a marathon not a sprint, there’s a lot to do.”  Several officials said how this bill could be amended over time, added to other legislation, changed to propose creating a group to study regionalization… They urged the need to stay vigilant and stay involved.  This is likely a months-long effort.

“There seems to be some sentiment for consolidation around the state in some shape or form. There are indications that Gov. Lamont could get behind it.”

“This is damaging as long as the specter of consolidation is out there. Our goal ought to be to kill this bill, make sure it is withdrawn.”

“What the bill doesn’t say is as troubling as what it does say. Left open to guess is the impact on teachers, class size, bussing, facilities (retrofitting, merging), curriculum, etc. To make the transition would cost money. I know what Wilton does, I know what I like about Wilton. We know the people on our School Board. You can pick up the phone, they’re our neighbors, talk to them about policy, logistics, standards, all of them.”

Why going to the hearings is important:  “It’s the personal stories that get the legislators. This is emotional and people will listen to those stories.”

“Wilton has become a focal point but there are other towns. Meetings like this one are going on throughout the state.”

“This is not about politics, it’s about our children.”

Among the action items Lalor outlined for residents:

Follow-Up on SB 454 School District Consolidation Bill: Reaction and What You Can Do

Over Constituent Coffee, Haskell Reiterates: ‘I won’t be voting for anything like SB 454’

There is a second bill (SB 457) calling for school regionalization proposed by State Sen. Bob Duff (D-Norwalk). While organizers say the bill that is most concerning is the Looney bill, the Duff-proposed bill is also a concern, indicating that some lawmakers want regionalization no matter what.

Duff’s bill calls for districts with fewer than 2,000 students to share services regionally, or risk losing state funding. The risk is that the number of students may get changed at any point in the legislative process, or the bill will get passed at 2,000 and then in later years get increased.

At the event at Norwalk Community College last night–the one Will Haskell had been committed to prior to the Protect Wilton Schools meeting–Duff was there, and several Wilton residents attended that as well. Reportedly residents from New Canaan and Norwalk were pressing Duff about this, and expressing their strong opposition to it and any type of school district consolidation.