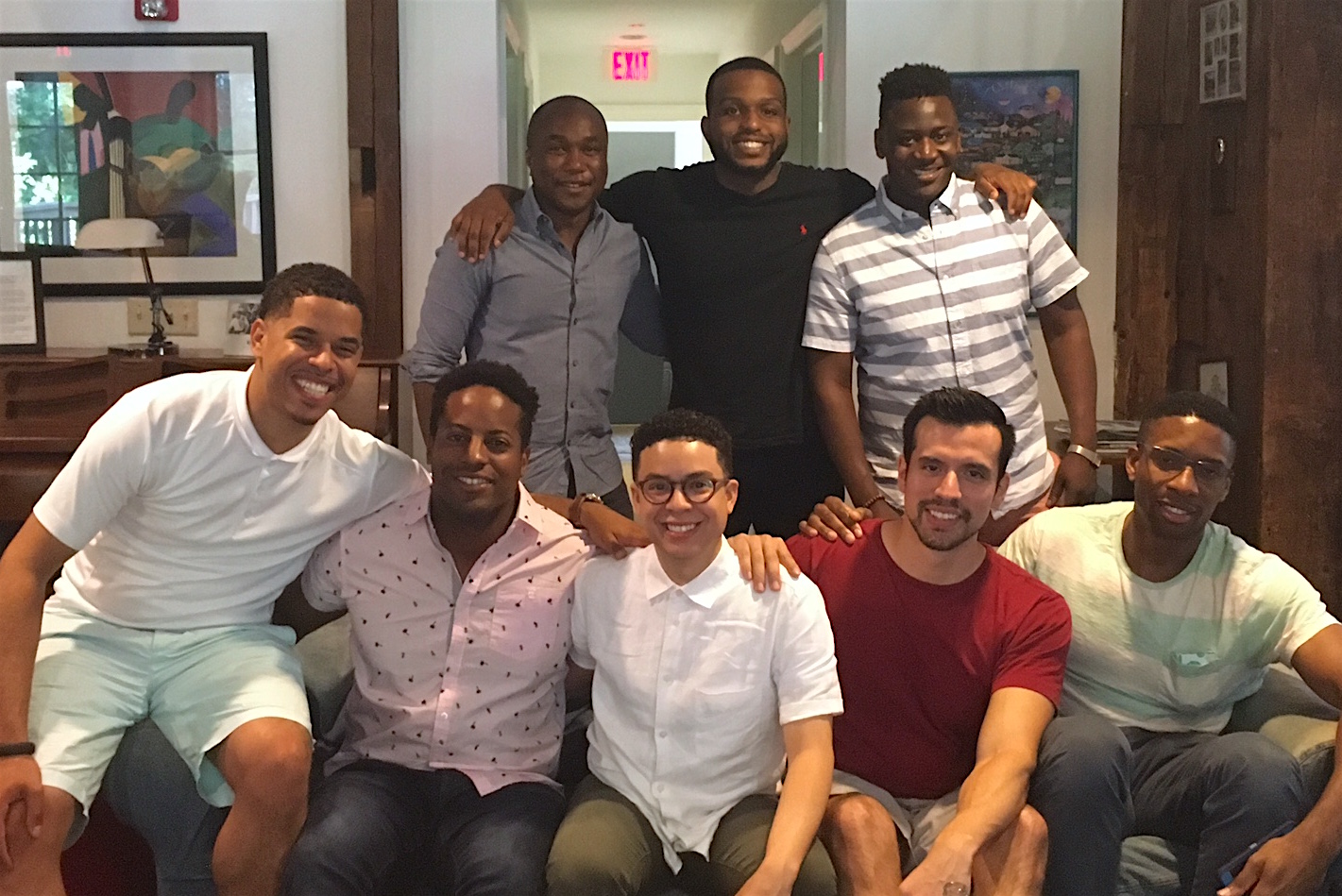 A Better Chance of Wilton (ABC) just celebrated its 20th year of hosting promising minority boys and girls and enhancing their chances of attending college through access to rigorous academic opportunity and a supportive community network.

For the first time as a group, eight ABC alumni recently returned to Wilton for a weekend reunion, and invited GOOD Morning Wilton to join in as they reminisced about their experiences in the program.

The 88-degree heat was no match for the warmth emanating throughout the ABC boys’ Cannon Rd. residence on Saturday, July 15. It wasn’t from lack of air-conditioning; the cozy feeling was strictly due to the sense of camaraderie and fraternity as ABC alums gathered back at the house where many of them lived while students at Wilton High School (some lived at the original ABC house on Godfrey Pl., now home to the ABC female scholars). Despite their different WHS graduation years–ranging from 1999 to 2008–the feel this July day was one of a family reunion.

The ABC website spells out the mission clearly:  “A Better Chance of Wilton exists to provide quality high school education and rigorous academic discipline to promising minority boys and girls, such that their chances of attending college are greatly enhanced. Most frequently of African American, Hispanic or Asian descent, the Scholars bring a cultural diversity to Wilton as well as life experiences and perspectives which are frequently eye-opening.” As could be expected, the somewhat homogeneous, bucolic town of Wilton can be pretty eye opening to the scholars themselves.

Ray Chambers (WHS 1999) was the very first ABC of Wilton scholar. Spending his childhood years on the island of Jamaica and then in Mt. Vernon, NY, he has a unique perspective on ABC Wilton’s early days.

“It was like starting something from scratch – the scholars, the board, the Changs (first residence directors), we were all motivated to make a difference, and we were learning as we were doing.”

Now a digital technology strategist with Google, he likened the atmosphere at the time to a tech startup.

“We wanted to be successful, but we didn’t really know what we were doing,” he says.

As the house parents, Patrick and Roberta Chang  set the tone for the program and set a standard for what they wanted the program to be – creating a family away from home and a support system.

“It was pretty strict–we were expected to do well academically and had a foundation centered on discipline, with chores every Saturday, study hours, volunteer work, athletics, and giving back to the community,” Chambers recalls.

Those values instilled by the Changs were echoed by fellow alumnus Anthony Esponda (WHS 2004).

“I would not be who I am without them. The reputation of the program was super important to them. We wrote thank you letters to every single person after a big meeting. Every person we spoke to at a fundraiser, we would write a thank you letter to. We were taught to remember their names.”

Chris Payne (WHS 2008) agreed that the scaffolding support they received was key.

“The Changs really stressed the family atmosphere, which helped us transition to life here.”

That was echoed by Qui-Juan Jones, who said that the boys’ host families also played a huge role. “I still keep in touch with my host family – in fact, I’m going to my host brother’s wedding in September. Mrs. Herndon is my second mom.”

First Impressions of Wilton and Going Home for Breaks

Jamal Aaron (WHS 2001), originally from Guyana, South America, spent his early teen years in Brooklyn. He had been offered a full scholarship at a boarding school, but turned it down to become an ABC of Wilton scholar instead.

“Coming to Wilton, I loved it and decided it was for me. I really loved the atmosphere. I met Ray, Luis, and the other guys who were here at the time, and I remember thinking that they were so polished. I thought, ‘I want to be like these guys,’ and I looked up to them right away. I liked the home environment as opposed to a boarding school.”

There was one difference Aaron noticed right away.

“When I came to Wilton, I don’t remember it being so difficult. The main thing was that I had a strong accent. I realized, okay, I’m a little unintelligible to some people, and I’d have to work on that.” The comment elicits laughs from his fellow alums, who say, “We teased him mercilessly,” just like brothers do.

Aaron says Wilton was definitely a change from his home in Brooklyn.

“Wilton was more rural, and wealthier. When I went home for the first time since coming here, I took two trains and a bus. As I got deeper and deeper into Brooklyn, I realized how different it was. I remember starting to feel a little bit alien in Brooklyn. I’m proud of where I’m from, but I felt privileged to have the opportunity to live in different places. The economic, racial, cultural differences didn’t hit me so hard.”

More than one alum spoke of “jealousy” in the way they were treated by friends and family back home.  Taking it in stride, they say they were considered less urban and were teased good-naturedly about it.

“The first time I went back home, I already seemed so different. My parents noticed it in the way I carried myself,” says Esponda.

James Uko (WHS 2005), who also hailed from Brooklyn, paints a pragmatic picture of his experience.

“Wilton for me was necessary in that it taught me how to adapt. My first time here I remember someone asking me whether I was part of the Bloods or the Crips.”

There was that flip side of Wilton. Esponda mentions experiencing “…stereotypes, discrimination, [and that] we had a different perspective than anyone else in Wilton.”

While the Changs instilled thank-you letter writing and unwrinkled shirts, Marcus Cave (WHS 2006) spoke of how the Gibsons, who were residence directors during subsequent years, “…sat with us at the table and gave us etiquette classes.”

The skills that ABC gave the boys made it easier for them to transition from high school to college, a time when rising college freshmen typically experience culture shock at having to become self-reliant and adapt to a foreign environment. For the ABC scholars, says Esponda, “College was a cake walk.”

Cave says what the program taught them extends even beyond college years.

“It grounded me for everything I know now. In college, I’d see people older than me who couldn’t even do laundry or go shopping for groceries. We took holiday photos every year, and if your shirt was wrinkled, you had to go back and iron it.”

Coming Back Means Giving Back

One main reason the alumni planned the reunion was to say, ‘Thank you!’ to Wilton in a very unique way.

“Five organizers got together three years ago to develop an alumni group as a way to have a support system for the scholars, so we can help each other with career, academic and life goals. This is the third year we’ve tried to do this, and Anthony had the brilliant idea of having a sleepover at the ABC House to get away from the city. Over the course of planning this reunion, we came up with the idea of a thank you video as a way to give back to the board members and the people in the Wilton community, because they’re the ones who allowed this to happen and let [the program] become what it is today.”

To Cave, there was something special about Wilton that made the experience supersede expectation, and it gave the scholars something even more than what the ABC program was expected to–giving back to Wilton in a key way.

“The Wilton culture exudes a different type of energy and vibe and you get the total package – the family atmosphere, the self-development, the peer development and the education. On top of that you get the extended package of the host families, and it’s not too far from the city for those of us that come from there. In addition to being ABC scholars, we represent the town of Wilton even further than what the program stands for.”

Esponda says that the ABC alumni feel a responsibility to contribute to the program just as much as they benefitted themselves.

“If there’s a way we can help anyone who came after us, Ray set the tone for that. He was always the person we looked up to –going to Brown, the first graduate of ABC of Wilton, Harvard – we all wanted to be like him. He would come back and donate his time and give us advice, and we all then started to do the same. We said, ‘We have to do the same thing that Ray did.’”

“We didn’t get here by ourselves; it’s always important to help the next person in,” he says.

In fact, it’s symbolic of how family is interwoven throughout every aspect of the ABC program. One way was how the scholars felt part of the wider Wilton family.

“The most powerful memory, at least for me, is the generosity of all the people involved in the program, from the drivers to the college coaches to the host families, the people who would visit the house during our dinners to talk about their careers … all those things built up over time. Twenty years from now still you’ll still have those memories,” Manzano describes.

The other family the scholars discovered was through their shared experiences, even separated by years, leaving them with a bond they’ll carry with them forever. It even showed itself in how they figured out who got the best room for their reunion weekend–just like true siblings. It was, they say, unanimous:

“We go by seniority–Ray gets the master.”