Home Community Running with Courage, Heart and the Help of a Friend 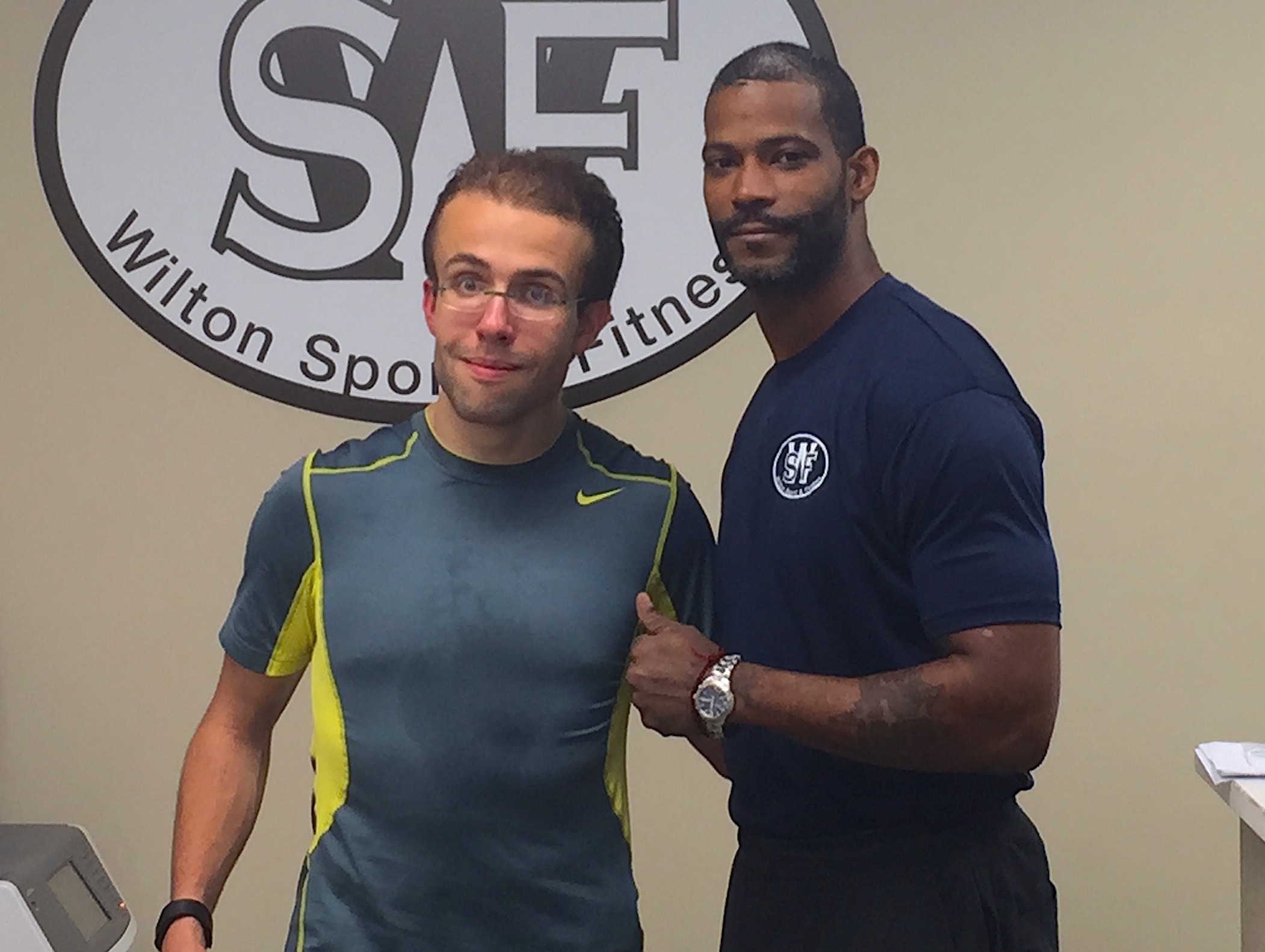 Running the Get Smart for Wilton 5K is a Memorial Day Weekend tradition for hundreds of people. Typically, runners complete the three mile race for fun, for a sense of accomplishment or for the fundraising on behalf of the Wilton Education Foundation.

But two men who ran this past year’s race had a bit of a more intense preparation and run. Crossing the finish line for 23-year-old Wilton man Alex Grano and his trainer Demetrius Whitfield, meant something else entirely.

When Grano was much younger, he was diagnosed with hydrocephalus, a condition characterized by the buildup of fluids in the brain, which can lead to lasting brain damage. Grano was living in Mexico at the time, and when he was age two, he moved to the U.S to have a life-saving surgery–without it he would likely die.

It may have saved his life, but it was still traumatic, says Grano. “What this did to me was I lost my ability to walk, talk, or pretty much be human. Now I am gradually getting this back. I didn’t even think I would be at this point to be honest with you,” he says.

Imagine what trainer Whitfield thought the first time they met, when Grano and his mother walked into the gym at L.A. Fitness.

“I was one of the first trainers hired at L.A Fitness, and he was one of the first members, along with his mom. He had a couple trainers before myself, and his previous trainer moved on to someone else. His mom asked me if I would take him on, and from then it was more so me trying to figure out how we were going to do this,” Whitfield recalls.

At the time, Grano was 17 years old, and he was just getting off of crutches. They both knew that it was going to be a long journey.

“It is different when you are dealing with somebody like Alex,” Whitfield says. “For the first days, his mom was asking if I could train him. I wasn’t going to say no, but I did have to process how this will be new for me and how it’s going to make me reach for something. When you work with an able bodied person, you can correct things quickly and it’s really a different ball game. I had to improvise a lot, and started to break it down beyond the basics. His nervous system and his muscular system really don’t know how to communicate with each other. Where you and I can walk and naturally move our hands, it was different for Alex and we needed to get to that point.”

Talk about improvisation:  Whitfield describes how he let Grano set the direction for where they’d start working.

“I remember the first day I asked him what he wanted to do, and he said that one day he would like to be able to run. I’m thinking, ‘This is going to be an interesting ride.’ But I said to him, ‘I’ll tell you what, when you are able to run we will do a 5K together.’ One of the other trainers right behind me overhears the conversation and said, ‘D, he can barely walk or function, how the hell are you going to make him run?’ I said, ‘I don’t know, but we are going to do it.'”

Whitfield would have to regularly remind Grano to do certain movements throughout the workout. He was able to do the movements, but his body would not communicate to his muscular system that he needed to move a certain muscle.

Grano simply says, “If I don’t think about it, I cannot function.”

During his training, Grano usually doesn’t feel a lot of pain–unless, that is, if he does something to his back.

“That’s another thing, his back is fused from C7 through O5,” Whitfield explains. “It’s like having a big steel rod going down your back. Essentially, he can’t bend or twist, which is important to everyday fitness, but its dangerous for him.”

And still they trained, despite the danger. For the past six years, Grano has been taking that risk, whether he be training with Whitfield, or running on his free time. It is dangerous for him to go out running on a bumpy road, but having his trainer with him helps in case there are any sudden divots in the pavement.

Regardless, the first 5K that Alex ran, he ran alone. His time was closer to 42 minutes, an amazing accomplishment, but he wanted to do better.

Which brought them to the Get Smart for Wilton 5K 2015. “This year we finished in 39:00 minutes. But at the end of the day, you have to commend him. So many people take life and the things they do for granted,” Whitfield says.

Grano simply says how it is a gift for him to be doing what he is able to do.

The duo plans on running the 5K again next year, and they are more than optimistic, planning on breaking the thirty-minute mark, a feat that even some able-bodied people can’t achieve. This is what the last six years of training have done for Grano, and what he will continue to achieve as he keeps working with Whitfield.