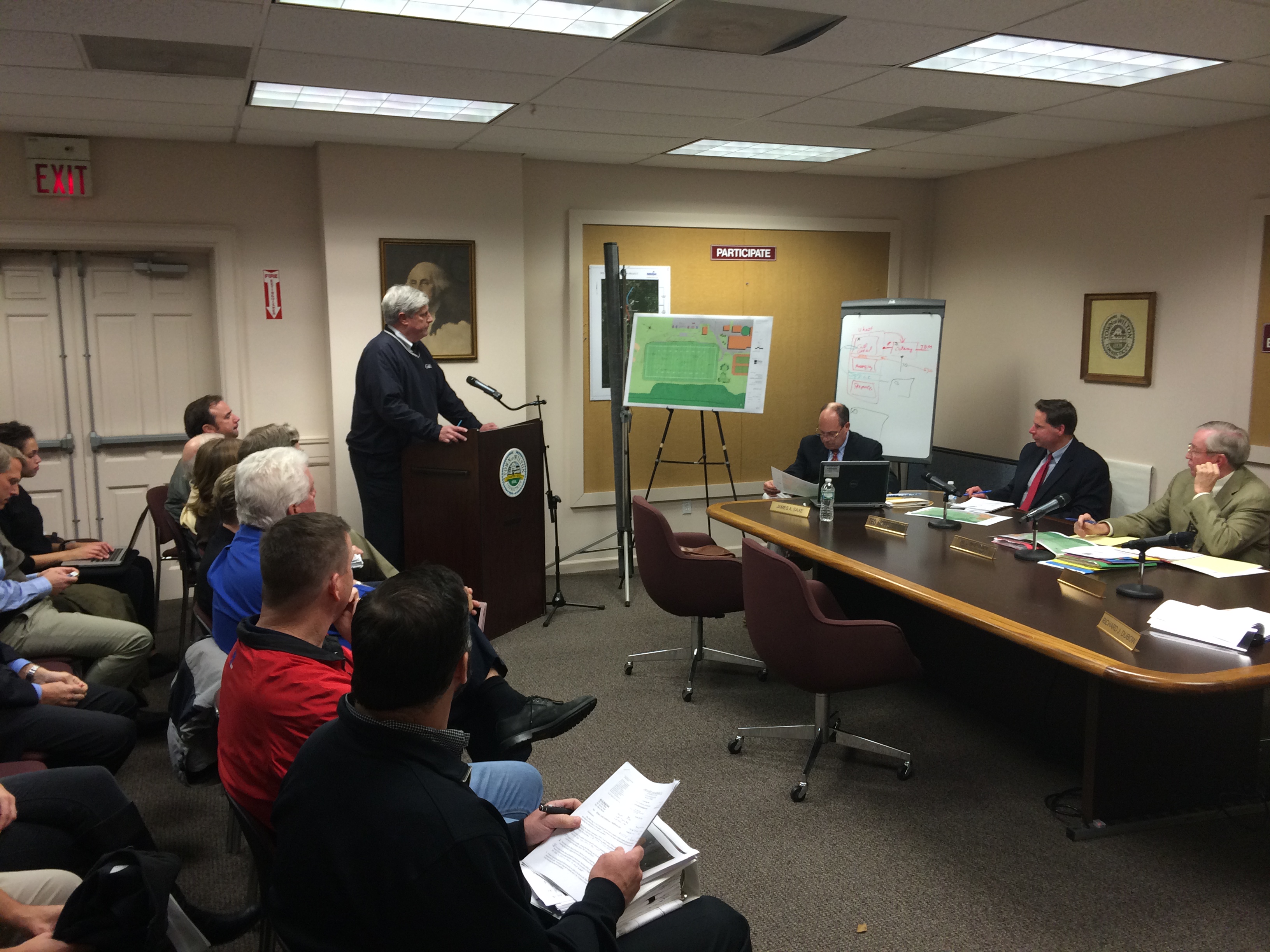 At Monday night’s Nov. 17 Board of Selectmen‘s meeting, the youth sports groups proposing a renovation of the field at Middlebrook School appeared before town officials seeking BoS approval of their current proposal to turf the field. Such approval would not allow the groups to proceed with actually starting the renovation. Rather it would only permit them to move forward with filing a permit application with the town’s Inland Wetlands Commission.

Approval from the BoS is required in order for the groups to proceed because the field sits on town-owned land.

J. Casey Healy, the attorney for the “Time to Turf” applicants–Wilton Youth Football, Wilton Youth Field Hockey Association and Wilton Lacrosse–presented the plan for the turf field to the officials. He said the three youth sports groups are willing to raise all necessary funds and foot the bill for the project, estimated to cost in the realm of $1.2 million.

“The associations are willing to raise this money and renovate the money at no cost to the town. We simply ask that you authorize them to proceed with those efforts,” Healy said.

Kevin Wall, treasurer of Wilton Youth Football, told the selectmen that the groups hope to proceed with a targeted summer 2016 installation:  “Project approved, fundraising completed, and get to work on it in the summer of 2016.”

Healy added that the first step for the group would be “to go to inland wetlands, we’d do that in early 2015. Then after we go to Planning and Zoning for a special permit. The thought and hope is if permits and approvals can be in place, that will charge the fundraising effort.”

In addition to changing the field from grass to turf, Healy said the groups have proposed putting in a seating area for spectators, creating handicap accessible entrances to the seating area and playing field, and providing access to the playing field for emergency vehicles.

The project’s estimated cost of $1,218,500 to renovate the field does not include the cost for the lights, Healy said. After facing some resistance from neighbors last fall with regard to lighting, and losing on its efforts to change zoning regulations to allow for 80-ft. lights, the group has scaled back its ideas for lighting.

“There are 30-ft. lights there presently. They don’t adequately illuminate the field but they meet the town zoning regulations which maximize the light poles to 30 feet. Youth Football did receive a variance from the Zoning Board of Appeals to put up 70-foot lights. Two neighbors appealed that decision to Superior Court; the Court heard that appeal in October and will issue a decision within 120 days. In the event that they overturn the grant of the variance, the associations are prepared to go forward without the 70-foot lights,” Healy said.

Healy outlined how they believe the field would help alleviate scheduling conflicts for the many athletes who use the fields, calling the Middlebrook field “crucial to Youth football, Field Hockey and Lacrosse.” He also said that the current field is in poor condition, and that changing the field from natural grass to turf would reduce the amount of manpower needed to tend to the field.

He said that the proposal has the support of both the Board of Education and the Parks and Recreation Commission, as well as the administration of Middlebrook School.

First selectman Bill Brennan was focused on whether the groups could raise the money in time to meet their targeted dates. He called the “Time to Turf” group “very determined,” and said he was “impressed with your enthusiasm, diligence and confidence.”

“They have been very cooperative and determined. This organization is basically offering to raise $1.2 million, probably more than that by the time it’s finished, and to gift it to the town. It’s a very significant gift,” Brennan said.

He did caution the organizers that it’s a lot of money to raise, and the town couldn’t allow the project to get started unless all the funds are raised, otherwise, “It places a burden on the town. It’s important to have the confidence you can raise these funds.” He called the group’s ability to raise the money within the project’s time-frame his “main concern.”

Healy said the associations are “confident” they can raise the funds. Wall explained that the groups haven’t been able to actively begin fundraising as they haven’t secured a formal approval from the town, complete with all permits and an official go-ahead. Despite that, he said, they already have had “significant” financial support from the community.

“We have about $250,000 in pledges right now towards the installation of a new field when the project is approved. We have raised significant funds to date towards the planning and preparation of the plan. We haven’t gone out to fundraise in earnest because we don’t have the approved plan. It’s a little bit of which came first the chicken or the egg, but we do feel very confident. There is significant support from the boards as well as the families who participate in those programs. We have a high degree of confidence we can raise those funds,” Wall said, adding that there are individuals who are willing to donate larger amounts.

Wall also told the selectmen that the groups currently have approximately $45,000 cash on hand in the bank, and that the groups had spent in excess of $80-90,000 over the past two years in efforts to promote the program. He said all of that has been collected without any “formal” fundraising effort.

Brennan also said that the BoS’s biggest concern is anticipating the cost of caring for the field long-term. “We have discussed with them that we have to have some kind of formula so that after 12 years, when the field has to be replaced, there would be some formula we would work out together and collaborate, that would allow us to have enough funds to be able to replace the field without a particular hit on the town.”

He also said that he has found other towns making similar “arrangements” to build fields through similar private-public partnerships.

After a question from the selectmen about whether other groups would be able to schedule usage of the field, Parks and Recreation chairman Mark Ketley explained that, “It’s been the policy that when gift is given to the town for a field, we never guarantee them that it’s their exclusive field.”

The selectmen gave their unanimous approval to the proposal, reiterating that the approval does not indicate an endorsement. “It’s not our role, it’s just so they can proceed with the project,” Brennan said.