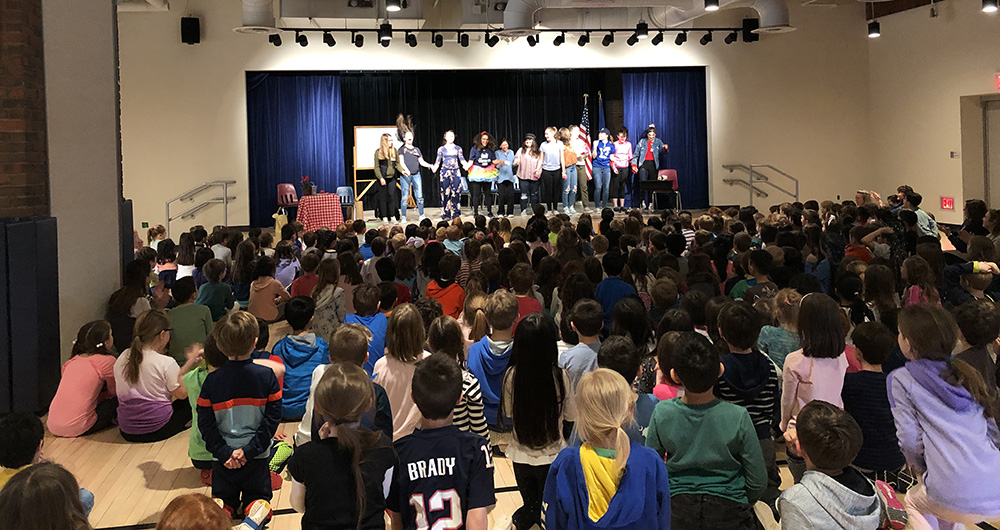 As it has been every year, Wilton’s Town Hall was lit this year with blue lights for Autism Awareness Day on April 2, for the annual “Light it Up Blue” campaign from Autism Speaks.

This year’s Inclusion and Diversity Awareness Month in Wilton Public Schools is also underway, and in each of the district’s four schools there is a flurry of activity, sponsored by SEPTA.

Wilton High School’s Top Inclusion Models (TIMs) travelled to Miller-Driscoll Elementary on Tuesday and are heading to Cider Mill on Friday, April 5, to put on a show for the younger students. The show, called “Do the Right Thing,” is based on the book, Spaghetti in a Hot Dog Bun. The short play celebrates kindness, courage and doing the right thing.

Top Inclusion Models is a WHS club with a mission to promote inclusion of all students regardless of ability or differences. “This was my favorite event, I love little kids, I love seeing their faces and their excitement,” said Kaylie Berghaus, a freshman who hit the stage for the first time with TIMs.

“I believe strongly in the goals of this club,” said Sinead Roche, another new member of TIMs. “No one should be excluded for looking different or being different. I really want to put my energy into working towards that for others.”

The group has been rehearsing hard for their shows this week, and it really paid off, keeping the Miller-Driscoll students  very engaged. The youngest Wilton students had lots of ideas for their older role models during the question-and-answer session at the end. They all came away knowing that it was important to do the right thing, stand up for your friends and treat others as you want to be treated yourself.

On Friday, not only will the TIMs perform again for Cider Mill students, but it’s also “Dress like a Bee” for “Bee Kind Day” at Miller-Driscoll and Cider Mill Schools. The day’s objectives are to encourage kindness and teach inclusion.

*Families can enter their children in the Bee Kind Random Drawing by emailing a picture of their children dressed like a bee. Include your child’s name, grade, teacher name and his or her thoughts on what it means to be kind. The deadline to submit a picture is 6 p.m. on Friday, April 5. A winner will be announced in GOOD Morning Wilton on Monday, April 8, and the winners’ pictures will be published!

On Wednesday, Wilton United put on a variety show in the High School Little Theatre. The show featured a number of singing, dancing and comedy numbers from a group that have been rehearsing since February.

Until last year Wilton United, a group of unified students of all abilities, focused entirely on sports, but WHS special education teacher and Community Steps coordinator Melissa Barrett realized some students preferred other activities over sports and she wanted to bring other peer mentoring opportunities under the umbrella of Wilton United. Thus, the idea for the Variety Show was born.

The show features 19 students in grades 6-12, participating both on stage and behind the scenes. Each of the performing students chose his or her own piece to perform.

“This is the first time I have ever conquered my stage fright,” said interpretive dancer Amelia. Other performers reported similar emotions. “I was scared and excited at the same time,” said Ethan.

Joining Barrett on a dynamo team of faculty are Clare Thomas and Emily Rippel. The trio are already thinking ahead to the next big thing.

“We asked students for feedback and they said something culinary; we ran a ‘top chef’ type program during summer school last year, and we are hoping to do it again this year. We also would love to do a unified theater production next year,” they said.

Next week Wilton United students and TIMs are going to be selling”‘Spread the World to End the Word” shirts during lunch waves at the high school.

As part of the month’s activities, SEPTA is hosting an adult Spring Social on Thursday, April 11 at Ambler Farm. This event is free and open to all SEPTA members, Wilton Public Schools staff and community members. RSVP online or via email.