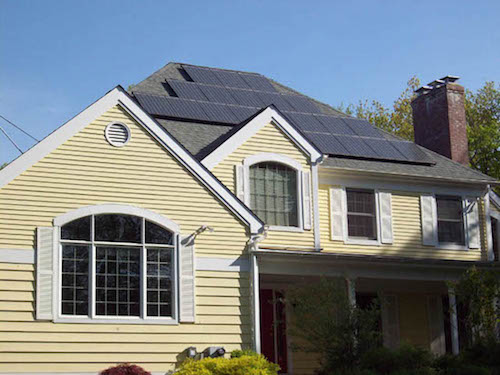 Since January, Wilton has been participating in a program called Solarize Wilton, an effort that offers financial incentives to residents who sign up and convert to solar power. In that time, 19 new Wilton solar customers enrolled in the program.

That’s a good start, says Jana Berktau, who is a board member of Wilton Go Green, the group that was instrumental in getting Wilton involved in Solarize Wilton. The program is ending its enrollment period on May 18, at which point the special pricing disappears. By that time, Berktau expects more people to sign up to convert to solar through the plan to take advantage of pre-negotiated cost savings.

“There are over 160 contracts out there, that people are mulling over. And Ross Solar has visited 219 homes in Wilton. We’re the 6th or 7th town in Connecticut to take part, and what they’ve found is that initially there’s a lot of interest, when people sign up. Then there’s a lull in the middle, and towards the close of the program when the price won’t be as favorable, everyone wants to sign up in the last two weeks.”

Berktau says Wilton Go Green’s board of directors are encouraged by the 19 people who have taken the step and signed contracts to have solar energy systems installed in their homes. “We’re hopeful that we can double that number.”

She’s someone who can attest to the benefits of going solar herself:  she has a system installed in her vacation home on Martha’s Vineyard.

“It is so exciting to have a solar system in which you can see your electric bill go way down, or disappear totally; in which you have a website, and you can go and watch your solar production on an hourly production, and feel just wonderful that you’re actually using clean energy, that goes from your roof to inside. You are your own power plant. If you do that here in Wilton, you’re a mini-power plant, which I think is so cool,” Berktau says.

Richard Creeth is one Wilton resident who signed up to convert his home to solar power during the current Solarize Wilton program.

“It’s something I was always interested in but it’s a question of price and return on investment. The Solarize program was great because we got really competitive prices, and there’s been a downward trend on all the equipment. To me, now was the time,” he says.

The savings seem to be a good motivation. Creeth shared the overall financial picture of the benefit, after reduced pricing and tax credits. “My net $22,000 investment will save me a minimum of $2,000 per year and this saving can only increase as electricity prices increase. As a retiree living off a fixed income, getting almost 9-percent return on my investment in a Solar system made the decision very easy.”

Creeth’s main reason for making the switch to solar is to reduce reduce his carbon footprint and try to make the planet a better place.

Berktau agrees that while reducing expenses is a major benefit of solar power, there are other beneficial aspects. “Not only do you reduce your expenses, but you’re doing the right thing for yourself, for your environment and the future. There’s just a lot of positives from it. Because it makes sense economically, there’s no reason not to do it.”

The window for Wilton residents to take part in the Solarize Wilton program is closing on May 18, when the pricing incentives end. “You don’t have to have the installation started, but you do have to have the commitment by then,” says Berktau.

Of course, the Solarize Wilton program is one more item that helps Wilton hang its marketing hat on being a green town, something that many town officials and members of the Economic Development Commission have talked about. In fact, Wilton Go Green’s vision statement is, Wilton will be the most environmentally sustainable town in Connecticut.

“We would love the town of Wilton to take that on, as a vision for the town, which would really make us unique in our area and be a very positive image for us as well,” Berktau says, acknowledging that she’s heard some conversation about that. She has also appreciated the continued support Wilton Go Green has gotten from the Board of Selectmen.

Overall Berktau says she’s encouraged by the progress Wilton Go Green has made in Wilton, and by the way many more people have begun to adopt sustainable practices and better stewardship of the environment—but, “We still have a ways to go.”

“I’m encouraged by the people who are getting engaged and how it’s slowly spreading through the schools—there’s a lot going on there. We’re having high school interns this spring to work on the Green Business Program with businesses in town. I’m encouraged by the organization we’ve built over the last six years and by the programming we’ve been able to start. There’s still a lot to do, we have our work cut out for us, but I love working at the local level and meeting people that get engaged,” Berktau says.

There are two upcoming opportunities for people to learn more about converting to solar power. There will be an on-site solar installation viewing for people to visit, at the home of Richard Creeth (250 Catalpa Rd.) on Saturday, May 7, from 10 a.m.-2 p.m.. In addition, Ross Solar is holding office hours on Wednesday, May 4 (5-7 p.m.) and Wednesday, May 11 (5-7 p.m.) at the Wilton Go Green office, located at the Realty Seven office (250 Danbury Rd.). No appointment is necessary for those events.

Ross Solar is the title sponsor of the Wilton Go Green Festival this Sunday, May 1, on the Town Green. They will have information and materials at their Festival booth.