Home Business SURVEY RESULTS: How Are Things in Wilton? 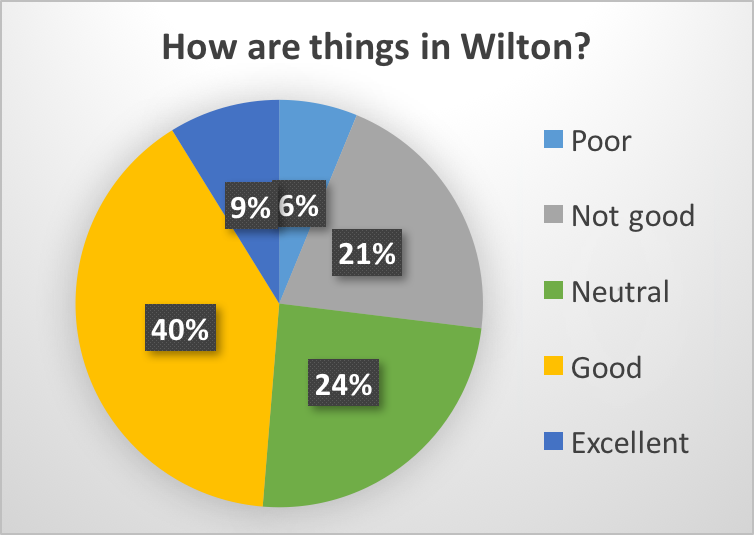 Two weeks ago we asked readers to fill out a short survey about how they thought things were going in Wilton. There were 193 people who responded to the five questions we asked. The GOOD news? For the most part it seems like people are relatively happy with the current state of the town.

In fact, our very first question asked people to rate how things are in Wilton on a scale of 1-5. Of the 193 survey respondents, 49-percent ranked things as GOOD or excellent. There are still some folks among the total respondents who aren’t so happy:  21-percent said things were ‘not good’ and 6-percent answered ‘poor.’ To put that in perspective, there were just 12 people who gave Wilton the lowest ranking. As for the remaining 25-percent, it seems they’re currently feeling “neutral” and perhaps they’re waiting to see what lies ahead. In fact, more than half of the respondents said things are about the same since the new Board of Selectmen took the helm of town governance, with 106 people (55-percent) saying they haven’t noticed much of a difference. There were 72 people (37-percent) who reported feeling “better” about things since Wilton’s new selectmen took office. Only 15 people (8-percent) said things have gotten worse. Even though more than half of our reader respondents said they feel things haven’t changed much since the new Boards took charge, that doesn’t mean they don’t think town leaders are doing a bad job. A sizable majority—62-percent (120 people)—say they like how our town leaders are governing. Not only that, 52-percent (101 people) say they don’t have any concerns at all. Still, there are 48-percent who report that they do have concerns, which is why the answers to our open ended questions asking for reader suggestions and feedback are important. A little over half our respondents said they do have suggestions they’d like town officials to hear, and we’ve got another article running today that publishes some of the comments, concerns and suggestions we found most interesting. It’s definitely worth checking out to see what specific ideas readers have for Wilton. We’ll be passing along the complete list to Town Hall via the first selectman’s office. We’d love to hear additional comments, thoughts and suggestions. Please feel free to use the comments section at the end of either article to share your thoughts and insights.